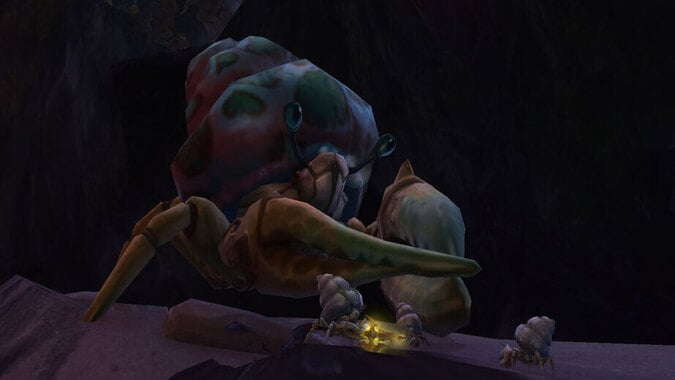 It could honestly be either. Evolutions arm is long, but it always bends toward crab.

While I give my kitchen tongs a few click clacks to get used to the feeling, it’s time for — The Queue.

I THOUGHT I SAW A RJAGODA BROUGHT TO LIFE

Do you and other writers like getting non-WoW questions?

Do you have any go-to music for solo content, like Torghast? Mine is Metallica’s Ride the Lightning album.

Least favorite M+ is Halls of Atonement. It’s too frontloaded, I hate that I’m at 80% trash before the second boss. Also those minibosses to activate the first boss can pack on heck of a punch.

Favorite M+ is probably Theater of Pain. It’s got good variety in its routes, and there’s nothing in there that I get super annoyed at. Like the Ardenweald area of De Other Side, or the pull right before the second boss in Spires of Ascension.

I like getting non-WoW questions. I contain multitudes, and it’s nice to be able to talk about all sorts of things. I mean I guess the better question would be do y’all like seeing us talk about non-Blizzard things. To a certain degree I know. The Queuemunity does also contain multitudes afterall.

I don’t have anything go-to. Just my general feelings for the day. I love to listen to audio fiction podcasts, but there’s just a little too much thinking involved with Warcraft to really absorb them. Especially if guildies start chatting.

CAPTAIN CAKEWALK THE DERP WAS WARM, THEY CAME AROUND LIKE THEY WERE DIGNIFIED

Marvels Guardians of the Galaxy is on Game Pass for both PC and Xbox! o/

It is! I really liked it, and if you like 3rd person action games, the Guardians of the Galaxy, or kick-ass soundtracks you should check it out! Just be prepared for about an hour of thinking that they’re not quite right if you’re really used to the movie versions of the Guardians.

RETPALLYJIL NEVER CHANGED INTO SOMETHING REAL

The trick is getting Pocopoc to do that instead of letting you know about another Jiro that you haven’t put enough points into to be able to activate yet.

I think that I’d really like to see a shakeup of the Warcraft endgame progression for 10.0. I’m not sure what I want it to be though.

The Artifact/Heart of Azeroth progression really did help you to feel stronger every week, which was a nice feeling. Leaving them in the dust was less so. Balancing characters wielding their Artifacts and Hearts with all of the fancy extra buttons we got from those though would be impossible. We’d all need seven fingers on each hand to press all of our keybinds and our openers on raid bosses would basically just be our closers too.

I just hate that I keep feeling like I’m trying to get my bear back to being as strong as it was in Legion and never being able to succeed. Between Conduits, Shadowlands Legendaries, and Azerite armor I’ve basically just been recreating my favorite powers from the Artifact tree for three expansions — kind of successfully but still not all the way there.

So maybe it’s time for a second tree, we could call it Titan talents and it would have a bunch of the powers from previous borrowed power systems, while adding some new neat things. That we could change up in rested areas. Imagine being able to use the super bear artifact power that prevented CC while you had it active for the CC heavy raid encounter, and then changing that to the giant Azerite laser that shot out of your face for the next encounter that had lots of little adds that needed to die quickly.

SO I GUESS THE MUSEDMOOSE’S RIGHT

Q4tQ: what’s the last game you played that surprised you?

I’ve long been curious about the Pokemon games, but thought the whole thing with leveling up a ridiculous number of individual monsters really wouldn’t be for me, and I’ve heard it can get pretty ridiculous to try to get the best stats and moves or whatever. But a friend who’s a big Pokemon fan encouraged me to try one of the “Let’s Go” games, because they’re pretty simple, so I thought I’d give it a shot. About six or seven hours played later…

My friend got it for us to play together just recently, and I remember it being announced and launched the same day whenever it first came out, but it didn’t really look like my cup of tea. Until I got in and played it that is. It’s a perfect game for me to just zone out, blast some monsters, and listen to a podcast.

SHADANAH DON’T CARE, THEY HAVE NO LUCK, THEY DON’T MISS IT ALL THAT MUCH

Q4BWP: It’s been a while. I actually have not played in a year– and my previous record of not playing was one month at the end of MoP. So, I am kind of lost as to what to do in retail to catch up. I know I have to complete the Chains of Domination questline and get my rep or bond or whatever it’s called up with the Kyrians. What else should I focus on? My ilvl is 200 and I am no longer worried about raids or M+.

Second question: With the announcement that Blizz will “discuss the future of World of Warcraft” in April… does that feel different than the usual “We will unveil the next expansion” statement? Am I playing with semantics too much or do you think their statement is intentionally vague for a reason? What’s the reason: WoW 2.0? WoW Mobile + expansion?

Log on and just keep doing the quests they throw at you. You should basically be able to go straight through any of the launch and 9.1 content without any time gating, and along the way you’ll get showered in Renown to progress your Covenant levels. When you’re done with those you’ll probably be sent to Zereth Mortis to see the new 9.2 quests, which will eventually slow down as you catch up to the rest of us. After that it’s up to you, Zereth Mortis and Korthia both have a metric ton of pets and mounts to collect.

As for the announcement, I think it’s maybe a little more dramatic just because we’re getting such a heads up about it. We can usually guess when we’ll see a new expansion announcement at a BlizzCon, so they don’t really need to hype us up for them. I think it’s definitely vague just to get us discussing it, rather than any major departure from the usual way of expansions. Something major like a World of Warcraft 2 or a complete overhaul to do a mobile expansion wouldn’t be announced as a look at the next expansion I think.

Of course, they could bamboozle us all and throw out a curveball that the next expansion is actually a StarCraft expansion so who knows!

Sometimes it’s just an easier way to break up the raid. Especially with the Jailer getting his own LFR wing, you can’t break up 10 bosses so they fit into three other wings nicely. Now yes, looking back on it, had I been in charge of ordering out the LFR Sepulcher route, I would’ve kept the first wing to Vigilant Guardian, Dausegne, Prototype Pantheon, and Lihuvim. I think that breaking down the door and then wandering over the main bridge section into Lihuvim’s sanctum feels a little more cohesive instead of going off to the sandy area on the south side of the Sepulcher.

As for the real boss order with regards to Mythic difficulty, I still remember the days of being able to toggle on Heroic at will. So you could pull the place in almost any order while you were still learning the bulk of the fights. Usually, the door to the last boss wouldn’t open if you did that though, so when it finally came time to work on Lei Shen you had to be able to go through the entire Throne of Thunder on Heroic.

I wish we could’ve done that in Sanctum of Domination. I would’ve loved to have been able to skip over Painsmith and just work on Guardian of the First Ones and Fatescribe. I might’ve been able to complete my Mythic armor set that way!

Have a great week everyone, even though they’ve stolen an hour of sleep from us. Don’t forget to leave lots of questions for Anna tomorrow!