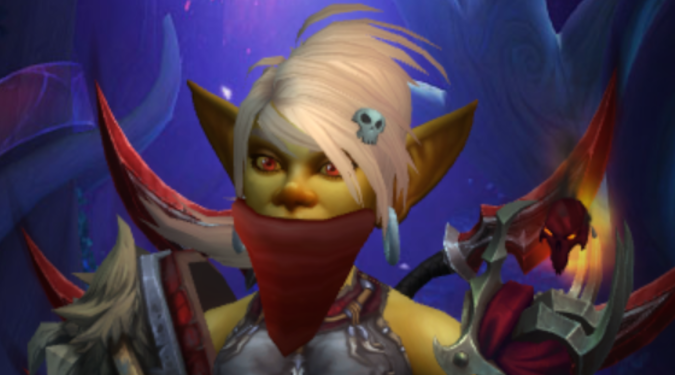 This character profile has been written for Icks, one of our supporters. If you enjoy it, you can check out the other profiles we’ve written, too!

“The thing is, everybody sees the green skin, sees the ears? And they expect a tone.”

She called down the Light, felt it twist in her very being. In this strange world — if you could even call the Shadowlands she’s stalked into through a portal opened atop a deposed king of death’s tower a world, as warped and contrary to her life’s experience as it was — the Light still behaved the same, and she was still the person she was. Other Priests often told her, on visits to the Netherlight Temple, that they felt the Light as a warm radiance. A soothing, healing halo.

Icks felt the Light like a torrent. The blast of illumination when a bomb goes off, or a bolt from the blue splits a tree next to you. There was nothing gentle or calming in the way she felt it, or used it. The strange magic-eating things pouring out of the rift in the bizarrely illuminated, weirdly pristine fields of Bastion looked like twisted angles gone wrong and ate all of the things they encountered, but they still died when Icks called the Light down on them.

Wait. Do they die? Everyone here is already dead, aren’t they?

Thinking too much about all of that gave Icks a headache.

“A tone?” The weird blue person following her around tilted their head. “I don’t understand.”

“Of course you don’t, you’re blue, everyone here is blue, and I guess you’re all dead and most of you probably never heard of a Goblin.” She stopped to root through the dead monsters’ bodies. Most didn’t have anything, but a few carried crystallized Anima. Whatever Anima was — she tried to follow the whole thing, really, but the weird robots in Oribos and all the dead people in their clubs just blathered on sometimes. Icks had been at this game for a while. She’d fought alongside monkey people on Pandaria, she’d gone to Draenor — but not that Draenor, everyone kept telling her as if she cared — and had kept the Legion from gobbling up poor Azeroth as a kind of snack, only to watch the Horde and the Alliance go to war again after all her hard work saving the planet.

After a while, you just got tired of keeping everyone straight. The weird dead people wanted this particular chunk of magic, and they called it Anima. How was that different from Azerite? Or Apexis Crystals? Or even whatever the heck Artifact Power had been, how could it be called that? Icks knew better than anyone that the names changed but the story stayed the same. People came to kill you, to steal from you, to use you… and you stopped them. Call it whatever you want.

The blue guy looked like he was waiting for more. She sighed.

“You guys like this stuff, right?” She held out the chunk of Anima. “Here. You can put it in that big box back at your flying city.”

“Thank you, Maw Walker. Since your arrival…”

“Yeah. Great. Look, do you guys have more of these things?”

“It’s nothing personal but I’m trying to fix your whole… everything… so if you could, point me to the next mess?” She straightened up, brushed her robes with her hands. “I gotta get to Korthia and fix their mess, and then there’s this gig I’m supposed to do for that big dude with the horns, I liked him better when he made my necklace for me but now he’s running around explaining things and it’s so much talk I kind of zone it all out, but I guess it’s important we chase Zovvy…”

“Zovvy?” Blue person looked absolutely lost. Icks understood that. He was probably the type who tried to remember all of this stuff, no surprise he’d get lost. There were always so many names and some new giant jerk would show up and throw a spanner in the way things worked and you had to fix it. She’d seen too many friends die because someone decided to upend the applecart, Icks had.

“There are some of Helya’s Val’kyr raiding the south, and an invasion from the Void…”

“Awesome. Here’s my map. Point to where they are?” He did. “Thanks a lot, blue. I’m gonna get goin’ and fix all that stuff, then I gotta jet back to Oribos, let Primo send me off to Zeth Morteth or wherever. I think that’s what he called it.” She whistled and a giant winged cat landed and dropped to its haunches, letting her clamber on board. The blue fellow stared, that same look of what is even happening on his face as she waved as the giant winged cat flew away.

Icks checked the map. The Void things were closer, and she knew how to deal with Void things.

The Light seethed up and down her arm.