Having watched a lot of competitive Overwatch League play, I had a few thoughts on the introduction of a ping system in Overwatch 2, which will allow players to “ping” the map to organize without relying on voice chat. It’s a system you’ll find in other competitive shooters like Apex Legends, and it can help uncoordinated groups of strangers play effectively — but Overwatch will only add it for the first time in Overwatch 2, which is going into beta on April 26.

In essence, the ping system lets you “ping” a location on the map, ping an enemy you can see, and give other information to your team in a quick, easily digestible way that doesn’t require any vocal communication at all. The Apex Legends system has been in the game since 2019 and it’s an excellent way to coordinate teams, while other competitive shooters without such a system — like Overwatch — are a lot more reliant on voice communication.

Blizzard told us that Overwatch 2 would have a ping system, but has been quiet about the details until now. So what exactly does Overwatch 2’s ping system consist of — and how will it affect players? Here’s how System Designer Gavin Winter explains the team’s goals with the ping system:

One of our goals was to augment speech and give people a way to visually interpret voice communication. We also wanted to support all voices and create a system to communicate for players that would prefer to avoid voice chat.

So let’s take a look at the new ping system and how it will work in Overwatch 2. 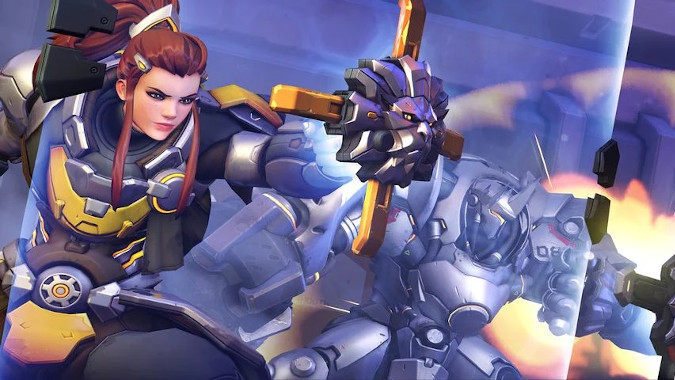 The information the ping system will provide seems pretty much modeled after Apex Legends version. You’ll be able to ping a target area or targeted enemy, and it will ping the map for all members of your team. If you’re targeting an enemy player, it will show their exact location and stick to them — at least as long as you have line of sight. When they break line of sight, whether through ducking behind a wall or using an ability that makes them invisible — like Reaper’s Shadow Step — the map marker will show their last known location. This should be a big advantage to coordinating attacks.

But there’s more to the ping system than just picking a target: it’s about effective communication. The in-game ping menu will also let you inform your group if you’re attacking or you need healing — and options like this can ping the map as well so players know where to go. For example, using the “need healing” option will put a ping on your character so other players will know where you are.

This will streamline and enhance team communication without making it necessary for any specific player to be speaking to describe where they last saw Junkrat or telling the group that Widowmaker is sniping at them. I doubt high level competitive play like Overwatch League is going to do away with voice communication — it’s a very useful tool, after all — but for players who don’t want a mic, or just plain hate having to try and explain exactly what’s happening and where it’s happening while it’s happening, this will be a positive boon. I definitely can see uses for it in League play, for sure, where it could still make it easier for teams to respond when things get hairy a click on the ping system is faster than a vocal description, but it will probably see the most use from everyday gamers.

Pings may put up more barriers to player toxicity

But the ping system has another benefit: reducing player toxicity. I think it could have a real impact on toxic behavior — with a well-designed ping system, OW2 players will have less need for a microphone and could conceivably play without one. It’s harder for people to harass other players through the information the ping system will introduce, a positive step forward for anyone who’s ever made the mistake of playing video games with a voice that is recognizably a woman’s. Gatekeeping and harassment due to gender is ridiculous and a real problem in competitive Player vs. Player games like Overwatch 2 is going to be, and I think this has the potential to reduce that for a wide variety of players.

There are opportunities for abuse in such a system, though, such as spam. But Winter specifically says the team has spam protection built in:

If you don’t like a person pinging so much, you have the option to turn the ping system off through block or squelch for that specific person. We do have heavy spam protection right now that we are open to adjusting, but we really want to see what works best for the community.

Hearthstone, which only allows communication with opponents via emotes, can also have spam issues, and similarly allows you to squelch players. It sounds like Overwatch 2 is going beyond that, but we’ll still have to see how well the ping system handles abuse.

But I’m most hopeful that Winter is correct and it will be helpful in the effort to reduce toxicity in the Overwatch community. It’s worked well in Apex Legends, I’m curious to see how it works in Overwatch 2. We should get our first look at the system at the end of April when the PVP mode goes into beta.