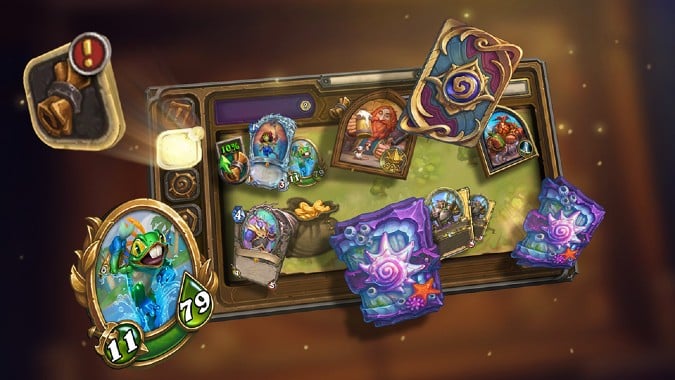 Hearthstone’s upcoming expansion, Voyage to the Sunken City, is getting a brand-new Rewards Track with completely refreshed goodies to earn. Besides being the main source of gold in the game, the Rewards Track also brings its own assortment of free packs — both for the current expansion and the evergreen Standard packs — as well as standalone cards, including a few uncraftable golden cards and Legendaries.

Those rewards are completely free — you only need to play the game and earn enough experience to unlock each prize on the track. Highlights include the uncraftable cards, such as our beloved Ambassador Faelin from that amazing trailer which you’ll earn right at the start of the track, and uncraftable golden cards like Tuskarr Trawler and Crushclaw Enforcer.

And besides the free cards, packs, and mountains of gold, another noteworthy reward comes at level 100: as is tradition by now, at that level you can earn a hero skin of your liking, from the usual nine choices — the nine original Hearthstone class heroes, each dressed in an iconic tier armor set from World of Warcraft. Gotta collect ’em all! 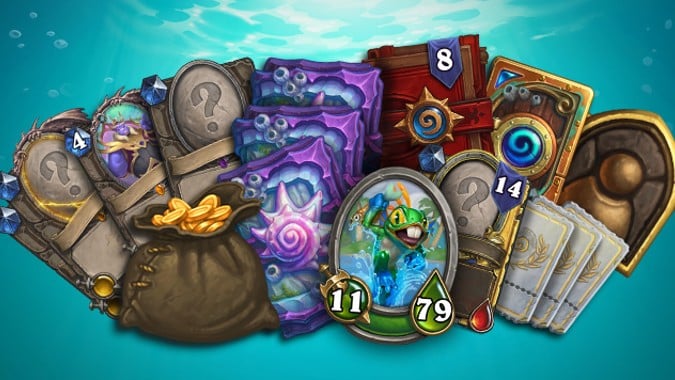 As we’ve come to expect by now, there’s also a secondary set of rewards that can be unlocked by purchasing the Tavern Pass, which will cost you 2500 gold, or $19.99. Those rewards include XP boosts, two brand-new Diamond cards, Mercenaries, skins for Constructed and Battlegrounds, and more.

If armed with the Tavern Pass, right at the beginning of the track you’ll unlock the first of two Diamond Cards on the set so far: Sir Finley, Sea Guide. The other Diamond card is the mage Legendary, Commander Sivara, but she’ll come from an achievement, requiring you to collect 25 Voyage to the Sunken City Legendaries.

There are a lot of skins coming with the Tavern Pass as well, and some of them are really interesting. We’re getting new, ocean-themed versions of old favorites like Magni, Morgle, and Lunara, as well as iconic WoW heroes such as Maiev, Khadgar, and Liadrin.

If that’s not enough, near the end of the track, you’ll get new versions of Ragnaros, Alexstrasza, Edwin VanCleef — or should I say, VanReef — and more. Have you ever wondered what Lady Vashj looked like as a Night Elf, or what Sylvanas would look like if she turned into a Naga? Wonder no more, for those are some of the new skins you’ll be able to obtain!

In addition to all of that, there’s also a brand-new Bartender for Battlegrounds, called Harth, as well as the uncraftable golden Legendary Blademaster Okani. Oh, and a couple of new Coins, if you care about that — though even I have to admit that the art for the Zin-Ashari Coin and the Sunken Coin looks really good.

You can read the full announcement and take a detailed look at both sets of rewards at the official blog.

Blizzard Watch is made possible by people like you.
Please consider supporting our Patreon!
Filed Under: Hearthstone Monetization, Rewards Track, Tavern Pass, Voyage To The Sunken City
Advertisement