The Queue: Let us begin 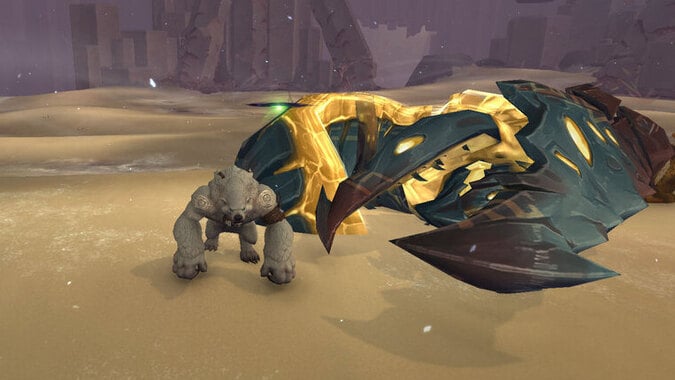 I’ve finally got some Mythic kills under my belt this tier! Between real-life being busy, and not raiding on Mother’s day this was my first chance to get in with the team for the big show. Thankfully, we got Vigilant Guardian and Skolex down with little issue!

That worm hurts! I don’t feel like I’m a very squishy tank, but Skolex was chewing through my armor like a worm going through an apple.

After we cleared the two bosses that my guild had killed before, we had a little time for Dausegne progression. She must be able to see the future or something because man did she have our number. Although she couldn’t seem to see us cheesing her Staggering Barrage thankfully. Did you know that you can force it to choose someone if they’re the only one in the raid that doesn’t have the debuff from it? That meant that we could pile the whole raid into one, and then have someone with an immunity stay out to take the second. Creative!

While I work harder on not getting hit by too many mechanics at once, it’s time for — The Queue.

Q4tQ: How many loops of Storm Peaks will I do for the Time-Lost Proto-Drake before I go back to getting screenshots?

Sadly, no I haven’t. I’ve seen its body before! I’ve killed the other drake that shares its spawn before! That’s basically like getting the Time-Lost Proto Drake, right?

I still keep an eye out for it if I’m in the area, but my days of circling Storm Peaks hunting for it are long past.

However many loops of the Peaks you did on Sunday afternoon weren’t enough I gather. Shame, because I just know deep in my bones that it always spawns just after you give up for it. I don’t have any definitive proof, and obviously, it doesn’t do it for everyone, but I’m easily 99% certain that after every trip I took up there someone else wound up getting it.

Things I know about Calgary:

You’re right on all three counts. They probably also have some other stuff, but I’m sure it’s not very nice.

I managed to catch the last overtime period of the Dallas and Calgary game, and that was some great hockey.

I am very excited to see what comes of the Oilers vs Flames matchup. Last night was the only time I ever really wanted Calgary to win so that we could have a big Battle of Alberta situation. With the provincial rivalry in play, it should make for some spicy hockey! Especially with how hard both teams fought to make it into round two of the Stanley Cup Playoffs.

So, Q4tQ: what’s you favorite scary/creepy thing in WoW?

Mine are the crypts under Karazhan, because the upside-down sinners room is just plain wrong, and most everything associated with Ahn’Qiraj and the silithid, because those bugs are creepy as heck. Bonus points for C’thun’s dispassionate voice of doom and/or death in the middle of the raid.

All of the Old God stuff really does it for me. I love their Puzzle Boxes, ominous whispers, and creepy tentacle-covered followers. Old Gods in other media are definitely my favorite horror tropes. Haunted Houses are a close second though, so Drustvar and it’s whole deal was a great time for me back in Battle for Azeroth.

Skulls are great too!

Or those wacky mad scientist types.

ROXXII THE BELOVED WON’T EVER SLACK UP

Inspired by the earworms

Q4TQ: What is the first album you acquired on your own accord? Mine were Franz Ferdinand’s self-titled debut album and Modest Mouse’s Good News for People Who Love Bad News as I bought them in the same purchase.

That was a long while ago, but I know that some of the first CDs I bought were Aqua’s second album Aquarius and #4 of all-time Canadian chart-topper Big Shiny Tunes 2. I actually just got a new copy of Big Shiny Tunes 2 for my car, and it still rocks really hard. I grabbed a couple of the songs off of it for Earworms over the past few months even.

I have no idea what happened to most of my CDs though. I seem to have lost them in a move, or just got rid of them as my tastes changed.

How many James Bond movie titles can you adjust if it was about James being a gamer?

Eg. The DPS is not Enough

Here’s a few off the top of my head, but I’m sure there are more out there that wouldn’t be specifically Blizzard-related.

Did you get to see the lunar eclipse?

I didn’t! I didn’t even know it was tonight until I started seeing y’all talking about it. I poked my head out to check, but sadly we had a cloudy night here.

ROXXII THE BELOVED CAME TO GET DOWN, SO GET OUT YOUR SEAT AND JUMP AROUND!

How goes key running this season if any? Pushing this last 150 io to 3k is brutal!

Keystones have been solid so far!

A bunch of the guild has been pushing the 3k score too to get their hands on those max-level conduits. So I don’t have a specific group, but enough of us are in the position where we can reliably hang around the 20 levels. Saying that though I’ve only had time to run a pair of 20s this season. I timed a Mists during the last Necrotic week, which just reinforced how much nicer the new nerfs to Necrotic were. Then this week we were 11 seconds overtime on Halls of Atonement 20. That one hurt, especially since I had a massive lag spike on the triple dog pack right after the second boss which wiped us. It would’ve been an easy key to time otherwise!

I’m still a little pupset at that one.

I’m sure that as the season goes on I’ll be able to sneak a few more 20s in. Real-life permitting! Right now I’m at 2740 and you’re right about the push to 3k feeling like it’s going to take forever.

Although thinking about the whole mechanic of maxing out your Conduit set I’m not sure how I feel about it tuned around such a hard set of achievements. I feel like they could’ve dropped the requirements a bit lower to like AOTC/whatever a medium PVP rating is/Keystone Master so that you had the max conduits to push to the current requirements of Cutting Edge/High PVP rating/Keystone Hero. Especially since the difficulty of a 20 doesn’t feel nearly the same as clearing the whole raid on Mythic. Maybe if they were asking for +25 keys…

I hope that you all have a great set of loot in your Great Vaults tomorrow, and don’t forget to help Anna have a great Queue by leaving her lots of questions!