The Queue: She’s riding a cat and there are stars around her 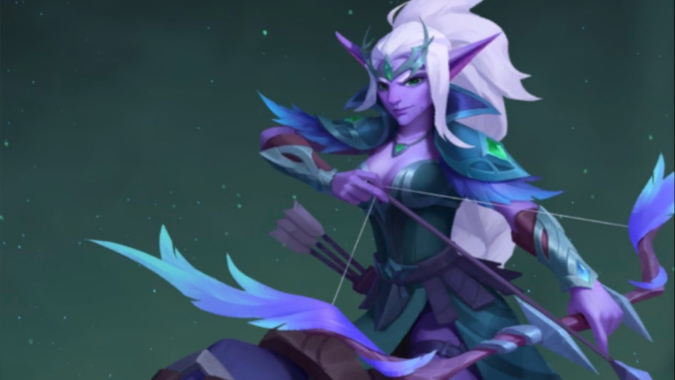 My wife has been playing this mobile game, and last night, she texted me a series of pictures of the art and characters from this game. To put it mildly, they are reminiscent of other games. Like, that header image? I had to crop it to fit, so you’re not really getting the full picture. But trust me, these guys are not even trying to hide it. The Orcs in the game are even worse, but they are far from the worst offenders.

This is the Queue. I’m legitimately fascinated by this game.

AM I SUPPOSED TO DO THE FUNNY INTROS TO THE EMAILS OR NOT? I CAN’T REMEMBER, IRISHA

QFTQ: how do you feel about orcas and why are they the best species in the universe

Honestly, I kind of feel like Orcs are a reflection of the best and worst aspects of humanity, projected onto an other so that we can hate those worst aspects and see how even the best ones can be twisted. In most fictional portrayals of Orcs, which are of course heavily derived from Tolkien, Orcs are basically just big bad monster types and servants of evil. That’s not surprising, as Tolkien took the name Orc from an Old English/Germanic word for a demon, although it’s hard to believe he didn’t know about the figure Orc from William Blake’s mythopoetic writings. He may well have deliberately made the Orcs of his story repellent and evil because as a traditionalist and a monarchist he found the radical, free love and rebellion supporter Blake who cheered for the American and French Revolutions to be his antithesis.

It’s true that in World of Warcraft we actually get to see Orcs as people a lot more than in most other interpretations of them. There’s a lot more complexity in Garrosh Hellscream or Thrall than we get in Tolkien’s Orcs, who exist to do evil things and be evil because the plot demands it. I like to believe that’s the spirit of Blake’s Orc, that lover of rebellion and chaos and change, adopting his namesakes and showing them a path forward that accepts what they are, both the positive and negative aspects. Since Orcs are fictional and we Humans use them to tell stories about ourselves, in a way, Orcs are us and we are all Orcs.

VIDRAX, I APOLOGIZE FOR THE BANALITY OF THIS HEADER

As someone who has not been playing WoW since Legion: The phrase “borrowed power” was mentioned in several articles, but I seem to have missed an explanation. What is it

Since you played in Legion, I’ll use and example from that expansion.

Borrowed Power refers to the Artifact Weapon and any other system that adds power as the player engages in that system, but which is unique to the expansion in which it debuts. The Artifact granted a host of abilities and made your character stronger with unique powers, but at the end of the expansion, it was essentially all lost — all that time and character progression came to nothing and you essentially had to start over in Battle for Azeroth with your once mighty Artifact a broken weapon replaced by the first green drop with higher base DPS.,

In a way, all gear in World of Warcraft is a borrowed power system, because you get gear that makes you stronger, but then you replace that gear with newer gear that gives you even more power. Borrowed power isn’t inherently bad, but when you add a Borrowed Power system, or several of them, to an expansion and make it the major focus of that expansion that you spend time and even level up the way we leveled up our Artifacts or our Azerite Armor, it can feel pretty bad when you eventually have to toss Ashbringer into your bank for Farmer Joe’s Rusty Pitchfork. May the power of Tetanus show you the pain of opposing the Light!

That’s basically all that is meant by a borrowed power system — it’s a way to gain in power on your character that isn’t a talent or ability or otherwise unlocked by the character leveling process. Dragonflight is taking a step away from the kinds of borrowed power we’ve been seeing since Legion, and we’ll see how that shakes out.

Q4tQ: Across WoW’s history, players have fought and killed the Dragonflight leaders of the Blue (Malygos in Wrath), Black (Deathwing in Cata), Bronze (Murozond in Cata), and Green (Ysera in Legion), but the Red Dragonflight has eluded us. Do you think to balance it out, we will get Alexstrasza as a boss fight at some point? Could she actually be the big bad of Dragonflight? What kind of plot twist would you write to set up such a fight?

I realize that you’re saying this because Murozond is the future self of Nozdormu… or at least that’s what Nozdormu has been lead to believe. Let’s just say that there could be a twist coming in Dragonflight.

But to answer the point of your questions —

No, I do not think we will get to kill Alexstrasza in Dragonflight.

No, I do not believe she is the actual big bad of Dragonflight.

I mean, I wouldn’t write that, but it’s not like it would be hard. Have some villain poison her with the blood of an Old God, she goes crazy and we have to kill her, roll credits, World of Warcraft kills yet another prominent female character for no good narrative reason and everyone decries the pointless fridging of an excellent character who was finally going to get some story focus.

In case I’m being subtle — I try not to, but sometimes it happens — I really hate the idea of us killing Alexstrasza the Life Binder.

KALCHEUS AND I HAVE VERY DIFFERENT IDEAS ABOUT DWARVEN NAMING TRADITIONS

In WoW? Both are great names for an innkeeper or something similar, a Dwarf who honors and prides themselves on the traditions of hospitality and fellowship among Dwarves that were sundered during the War of the Three Hammers and is now slowly being knit back together.

In D&D, it would really depend on whether or not your Dwarves had a culture more or less akin to that we see in Tolkien or Tolkien derived ones. In my most recent game my Dwarf came from an alpine people who lived in the mountains inside the bones of an ancient Dragon they killed after it had enslaved them for generations, and their names were all based on descent from their mothers — so Ristana, my Barbarian, her full name was Ristana oc Kaltjarn.

Question for the Queue:
Has anyone else just not been able to learn layout of Oribos? I always have to look at my map to find anything specific. If I don’t use my map then usually do a lap around whole place looking for where I want to go.

I started doing the lap around the first moment I landed in Oribos and I never saw any reason to stop. It’s a big circle. If I can’t find where I want to go, eventually I’ll get there just by process of elimination. So why even bother to learn where anything is? I know where the portals are, that’s good enough.

This was my approach to Ironforge and Undercity as well. I still do it in IF. Obviously I can only do it in Undercity in Chromie Time or WoW Classic.

Okay, that’s the Queue. Take care, everyone. Hug the people you love.