How to find, make, and join cross-faction groups in WoW patch 9.2.5 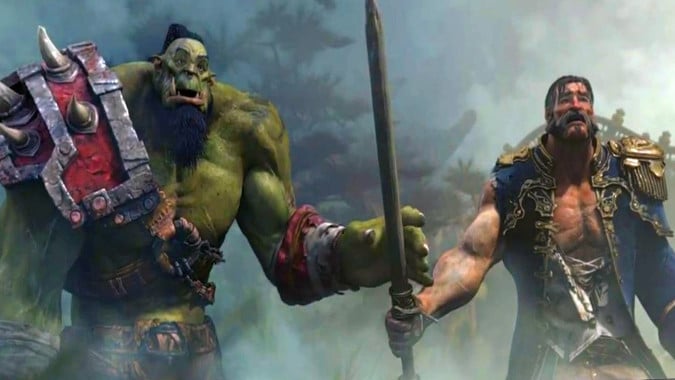 In Shadowlands patch 9.2.5, at long last the division between Horde and Alliance is lifted! Sort of. Characters of different factions will be able to group together for content. Some of it. They will be able to communicate to one another without a language barrier, when in a group. And they’ll be able to summon each other to dungeons, trade items and gold, and live together in harmony — with restrictions.

Patch 9.2.5 finally makes it possible to just play with your friends, no matter where they are. Or fill up a group, even if your faction doesn’t have enough interested players. There are a lot of ways cross-faction groups could make your gaming life easier, but before that can happen you need to know how cross-faction groups work. So let’s dig into what exactly you can — and can’t — do with patch 9.2.5’s cross faction group feature.

You won’t start seeing random group invites from the opposite faction when you install patch 9.2.5. Strangers out in the world cannot just invite one another to a group, so you won’t get a swarm of group invites. Instead, you have to be friends first: if you’re friends with another player — Real ID or Battletag — you can invite them to a group regardless of faction.

It’s the simplest way to make a cross faction group, and works exactly the same as inviting a friend now: Just hit O (assuming you haven’t remapped the key), right click on a name, and Invite. You won’t get any more error messages saying they are the wrong faction — you’ll immediately be grouped together. 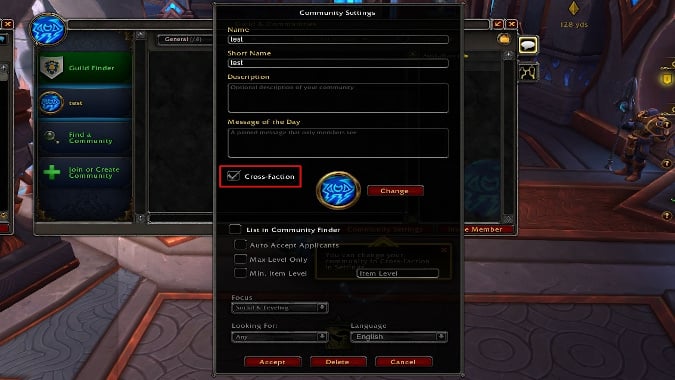 Communities can be cross-faction

Guilds cannot be cross-faction: they remain strictly Horde or Alliance only. But communities — remember those — can be mixed, including members of the opposite faction. But if you don’t like playing cross-faction, communities can also be restricted to a single faction. When setting up a community, there’s a checkbox that indicates whether or not to allow cross-faction. Now characters of both factions can join the same community, and treat this as one group, kind of like a guild — without the perks, like a guild bank, or tabard, or showing up on a leader board. But, maybe, this will set a precedent, and communities, rather than guilds, will be the competition for world first raid clears.

Technically, communities could be mixed before. Players could be added individually by character, or the community’s owners could have players join with their Battle.net name. Therefore, anyone could speak within the community, on any character, regardless of faction. This would of course lead to discussions of, “Does anyone want to run a mythic+?” “Horde or Alliance?” Now, that’s no longer an issue.

Whether the the community is created by adding characters individually, or adding players by battle.net, everyone will be able to group up through the community. 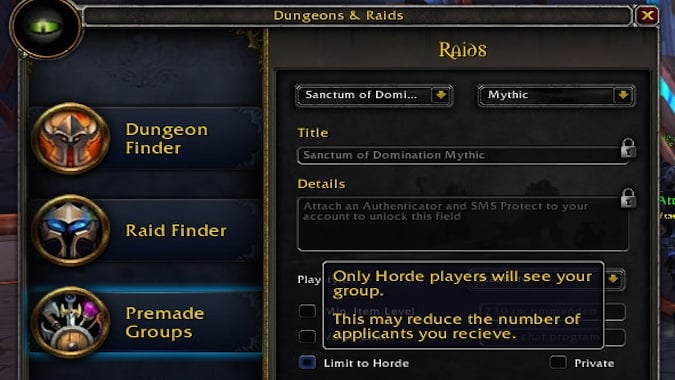 Group finder can be cross-faction

A common way players are going to see the new cross-faction system is through the premade groups in Looking For Group system. But this doesn’t apply to Dungeon Finder or Raid Finder, which are still faction-specific.

When a player sets up a group for certain content, there’s a new box to decide if the group is limited to their faction — otherwise, by default, it will be cross-faction. Some purists don’t want Alliance joining up with the Horde, or vice versa, and this lets them choose the experience they want. But beyond that checkbox, everything works almost the same as normal group finder. For example, if when trying to form a group, you want to whisper a potential candidate to ask questions,  that will be impossible if they are the opposite faction and not in the group yet. So there are some differences, but not many.

When creating premade groups, be sure to watch for the cross-faction, and ensure that everyone will be able to vet players before the run, and everyone is on the same page about what is expected.

Limitations of the cross-faction system

We’ve already listed a lot of things cross-faction grouping can’t do — but there are more restrictions to remember. Some of the following are limitations, whileothers might be considered perks. First of all, while outside of an instance, War Mode is not turned off. Let’s say you have a group of four Alliance and one Horde, and everyone has War Mode on. The Alliance summon the Horde. And then, since they are hostile towards each other, the Alliance, for good measure, kill the Horde player as soon as they arrive. It can be done. Once everyone is in the dungeon or raid, War Mode is turned off, everyone is friendly with one another — but until then, PVPers may want to tread with caution. This is just something to watch out for, or to plan for.

Communication is key. When in a group, language barriers are dropped — as long as everyone is speaking in Common and Orcish, at least. The Horde still don’t understand Darnassian, for example. But before characters join the group, a Horde’s “lol” is “kek” to the Alliance. But once you’re all in a dungeon together, the opposite is true.

But about those summoning stones… you can summon cross-faction with stones, but summoning portals are faction specific. That means, if an Alliance player clicks the stone, an Alliance player has to be the second to click the portal. If the two players at the stone are one Alliance and one Horde, no one will be summoned.

Some dungeons have a faction-specific boss, or NPC, and in cross-faction groups, which one shows up is based on whichever player goes in first. That dictates which “faction” the dungeon is considered. However, that doesn’t always seem to be the case. One group testing found that Halls of Reflection always spawned Sylvanas, and never Jaina, in a cross-faction group, regardless of which faction the first character was that entered.

While in the outside world, players cannot trade with, climb on the mount of, buff, or resurrect players of the opposite faction. However, once in an instance, all of those restrictions go away! From there on, the game acts like act everyone’s the same faction. You can open up trade, give them gold, exchange potions, turn into a Sandstone Drake and have the opposite faction jump on your back.

Finally, some instances are not cross-faction at all. The following are limited to same-faction only groups:

Now that you know the ground rules, get out there and enjoy your cross-faction groups!