What to know about Ms. Marvel before watching her eponymous series, debuting June 8 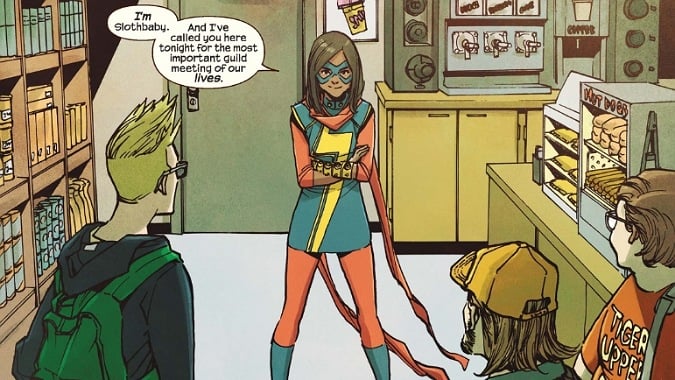 Marvel is about to release a brand new Disney+ series being released with a name that’s on brand: Ms. Marvel. Before the 6 episode series hits the web, let’s take a look at Marvel’s more recent and beloved super hero, Kamala Khan.

The story of Ms. Marvel begins in the early 2010’s, when Marvel Comics decided to enter the world of digital comics — and do a lot of rebooting — under the Marvel Now brand. During this period, there were quite a few radical changes in previously established characters, with Sam Wilson becoming Captain America, Laura Kinney taking her father’s mantle as Wolverine, Doctor Octopus becoming Spider-man, and Carol Danvers taking on the name of her former mentor, Captain Marvel. With Carol moving on, the world—or at the very least Jersey City— needed a new hero, a new Ms. Marvel. 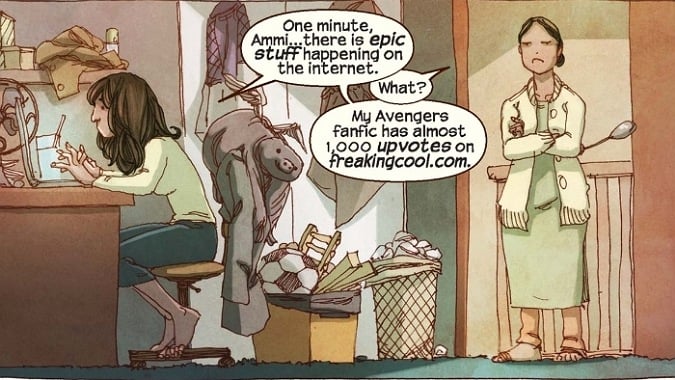 Kamala embiggens her fists — and your heart

Debuting in 2014’s Ms. Marvel #1, Kamala Khan was your average teenager — writing Avengers fanfic, playing video games that are legally distinct from World of Warcraft, and awkwardly trying to both respect her family while still trying to be independent. You know, typical teenage stuff. When sneaking out to a party, Kamala was exposed to a strange gas that unlocked her dormant Inhuman DNA. This granted her polymorphic powers to change size, alter her appearance, and have rapid healing. You know, typical teenage stuff in the Marvel Universe. Donning an altered bathing suit and a domino mask, Kamala becomes the new Ms. Marvel. Her rogues’ gallery of evil forces features city gentrifying hipsters that are actually HYDRA, sentient computer viruses that learned how to interact with humanity from legally distinct Barrens chat, and drones of her normal teenage self that got out of hand like the brooms in Sorcerer’s Apprentice.

Embiggening is not what her real power is though. Kamala’s real power didn’t come from her somewhat alien DNA — it’s her wholesomeness. She’s one of very few heroes who has a healthy family life, a solid friends group that do know her identity and offer support, and in times of trouble will turn to her Iman for advice spiritually. Her kind, geeky nature has led her to be befriended by almost any hero she meets, which has lead to her already being on the Avengers, and after Civil War II, The Champions — think junior Avengers that don’t report to Iron Man, Captain Marvel, or Captain America who were not really on speaking terms because comics in the 2010’s were confusing —  with Miles Morales, and a time displaced Cyclops.

Did I mention comics in the 2010’s were confusing? 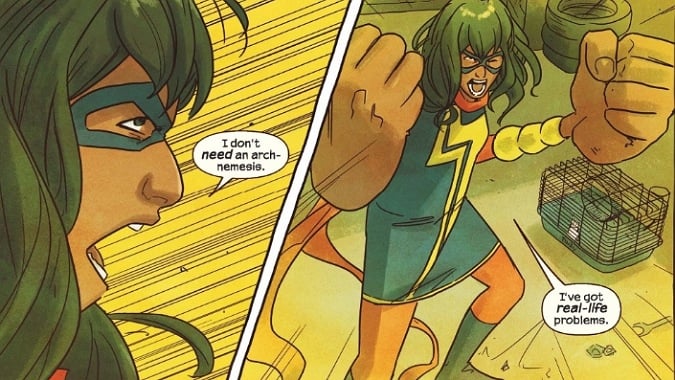 We don’t talk about Bruno Carelli

In this summary, I left out quite a bit for two major reasons. One being we don’t know where the series is going in season one. If it’s similar to the first arc, it would be best to just enjoy it as it happens. The other reason is they have said they aren’t following her Inhuman origin. Marvel attempted a Inhumans TV series around the time the book launched and there was a huge push for Inhuman content. The fact that no one remembers the show tells you how well that went. The only downside I can see to not including Inhumans is that means we likely won’t see Lockjaw, a huge teleporting dog that loves hugs, which is a real loss. The show will tie Kamala’s powers closer to that of Carol Danvers, but what that means has yet to really be seen. We’ve seen her trademark giant fists, but as energy and not rubbery skin. How her powers work isn’t really important to who she is — a hero that’s all heart.

Ms. Marvel debuts on June 8. If you enjoy it, I really recommend you pick up Ms. Marvel Vol 1 by G. Willow Wilson, featuring incredible art by Adrian Alphona. The next Ms. Marvel series, Ms. Marvel Team Ups, debuts in August.