This Queue exists in its designated spacetime location 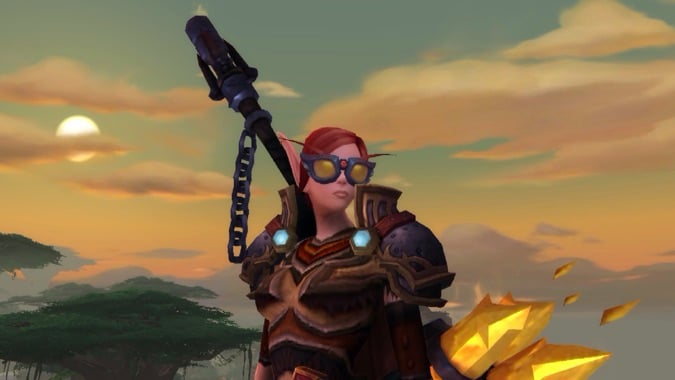 Okay, seriously, where did this Friday even come from? There must have been time travel involved. That’s the only explanation for how it’s clearly Tuesday — at latest — but the computer insists it’s Friday. Weird.

Well, regardless of time or date, let’s get to some questions.

Q4tQ: With dragons taking center stage again, do you think that Dragonflight will feature a Caverns of Time dungeon for the first time since Cataclysm?

Is there a moment in Warcraft history that you would like to see?

I know we have WoW Classic now, but I’d honestly love if the Caverns of Time could send us back to some vanilla-era settings. Maybe we could revisit the original Scholomance or Blackrock Spire. Maybe we could go back to fight Stitches walking down the road to Darkshire. Maybe we could see some of these things we recall from the old days from new angles. I think it would be fun!

Queue/podcast/article suggestion…I have NO idea how to play HS Battlegrounds. It makes absolutely no sense to me. A tutorial/primer would be most welcome!

Battlegrounds isn’t so bad, once you figure out the basics. It’s an auto battler, which — at least to my mind — means the game more or less plays itself. You set up the board, and then let it go.

Your initial choice is to pick a hero. Sure, you could look at stats and win rates for them, but really go with whatever seems like the most fun here. Be sure to read the hero power, as that defines how each hero plays — you’ll want to make good use of it to win the match.

To set up your board, you need minions — but they’re gonna cost you. Each minion you buy costs 3 gold and, fortunately, you start the game with 3 gold. During the first round, you’ll have a choice of three minions — buy the one that seems strongest and then play it by dragging it to your board, just like you would any Hearthstone card.

Each round, you’ll have one more gold to spend — so in the first round you have 3, the second round you have 4, and so forth. Keep buying minions and putting them on the board. Don’t see a minion you like? You can refresh the Tavern and get a new set for one gold. (Just be sure you’ll have enough left to buy a minion after you do.) If you see something you want but don’t have the gold right now, you can freeze the board so all of the minions will still be there waiting for you next round.

If you ever get three copies of a single card, it becomes a golden card: a more powerful version of the original card that takes up less board space — and the amount of board space available will get more important late in the game.

The place where you’re buying all of these minions is called the Tavern, and it can be upgraded to offer more powerful minions. You’ll notice that each minion has a number of stars on the card, representing its quality, from 1 to 6. As you upgrade the Tavern, you’ll gain access to more and more powerful minions… but of course it will cost you, too.

The first chance you have to upgrade the Tavern will be round 2, when you’ll have four gold and the upgrade will cost four gold. Each round, the upgrade costs one less, so if you wait long enough — which I don’t really recommend — you could get that upgrade for nothing. (No, really, I do not recommend that.)

Once it’s upgraded, keep on buying the best minions on offer.

That’s a pretty bare bones overview, but here, really, you just need to play and get a feel for it. There are lots of card synergies you can use to build up a more powerful deck, and different “tribes” of minions — such as beasts, elementals, murlocs — tend to work well together. Some hero powers favor different types of minions or strategies, but I really think the most important thing you can do at this point is play and see how it goes.

Read the card text and think about which cards might work well together. Watch what your opponents are doing to figure out how to build big boards. And generally just try things until something works out.

Battlegrounds is certainly my favorite Hearthstone format, and it can be played without spending a dime. So I really recommend giving it a try if it seems remotely interesting.  It doesn’t cost you anything, it’s straightforward once you start to get the hang of it, and it’s pretty fun. You’ve got nothing to lose except the time it takes you to do a match.

Is it just me finding it odd, or all the updates for DI, just attributted to the Diablo Immortal team, and we no longer have a ‘face’ for Diablo in general, and DI in particular? Is that slowly going away at Blizzard, and Ion will be the last person standing as far as that ‘face of the game’ in Blizzard going forward?

I think this is becoming more common across the board, to have things attributed generally instead of to specific people.

I think it’s generally a good thing. One of the problems — and I must stress this is just my opinion, I have no facts to back it up — with Blizzard culture is that in many cases we see one dude who is the “face” of the game or even the company as a whole. This face famous… and in many cases praised for every success a game has. In the eyes of the fan, these people practically are the game, the sole reason for its success… or its failure.

And then, let’s say they leave Blizzard. From the outside looking in, there’s a power vacuum. The one guy who was the face of the game is gone — now it looks like everything’s fallen apart, like everything’s in ruins. Blizzard is dead! World of Warcraft is over!

Etc, etc, etc. We’ve heard it all before and we’ll hear it all again, the next time someone with a name we recognizes leaves the company.

But the thing is, it takes a whole team to make something as big and complicated as a video game. A singular developer being the “face” of the game was never accurate, and building up single rockstar personas is both unhealthy for Blizzard as a company and bad for gaming in general.

You’re putting one person on a pedestal. They get all the attention. All the praise… and all the blame. That person can take abuse and harassment, and that makes it difficult to put women, people of color, and minorities in these positions — in the event of any trouble, they’re going to take the most heat, and the kind of harassment gaming can put on people is not a gig anyone wants. Or deserves.

This stifles diversity in a lot of ways. You’ll notice that every name I mentioned above is a middle-aged white guy. The face of Blizzard, of every game, for a very long time, has been a middle-aged white guy. And because this “face” of the game is seen as the one solely responsible for the game’s success and/or failure, you get the opinion that this is the whole company. That this is all of gaming.

But with everything that’s been happening, I think Blizzard is aware of the problem this presents, and they’re trying to put new voices out there, and more of them. Trying to avoid having a single person be the face of a game, and show that these games are created by big teams full of lots of different kinds of people.

Now we see announcements, previews, interviews, and so on that involve multiple developers — and specifically a more diverse group of people. Look at all the people of color in the Overwatch 2 Sojourn reveal. Look at the Diablo 4 quarterly updates, where each section is written by a different developer working on a different part of the game.

I don’t find it odd: it’s a new direction, and a positive one.

We’re just getting started on Heroic Jailer, so we’re making all of the usual learning missteps trying to get it together. I, in particular, never killed normal Jailer, only LFR, so there’s a lot new to me. But I only accidentally fell into a pit once, and only got mind controlled three or four times — absolutely a good night where I’m performing to the best of my abilities!

Ahem. I mean to say that we’re learning. I’m learning. I’m feeling pretty confident that we’ll get this before the Season ends in August.

And that’s all for now my good friends. I’ll be back next week with more weird answers for your weird questions, but until then I wish you all a pleasant day and ask you to go pet your dogs for me. They’ll appreciate it, I’ll appreciate it. so everybody wins!

Take care, everybody, and have a great weekend.