The Queue is a dragon. We’re all dragons now. 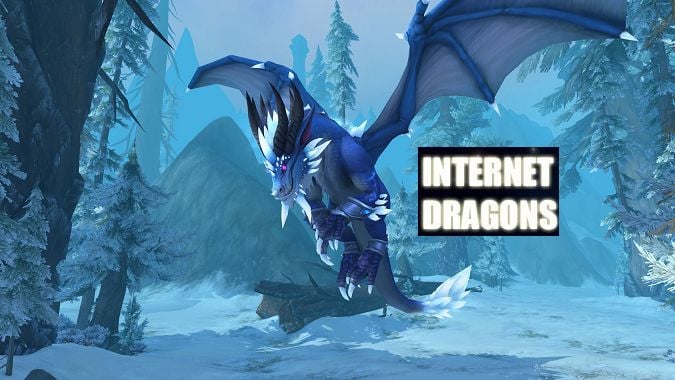 Dragons! Dragons are great and I love them! Really, who doesn’t love dragons? Everybody loves dragons. So let’s spend today talking about Dragons, and definitely not thinking about boring things like Valor Points.

Sound good? Let’s do this.

[Q4tAlphaTesters] What will happen with my Valor Points once Dragonflight launch?

My no Valor Points rule lasted exactly this long.

But okay. I’ll assume this is a real question we’re really asking. As an upgrade currency, at the end of an expansion Valor Points are typically converted into gold at a poor return ratio. If you have Valor Points before the expansion closes out, the best thing to do is to spend them.

What will happen to my Valor Points in the Alpha?

Okay. Well. There aren’t any character transfers to the alpha right now — you are only playing template characters. And that means you won’t have a character on the alpha with Valor Points in order to worry about what will happen to your Valor Points.

There. Okay. We’ve answered every possible question anyone could have about Valor Points. Now, to the dragons!

QftQ: Now that we have a look at what Dragonriding will actually look at (at least while leveling in Azure Span) what is your opinion on the system?

So far, I don’t have a good hang of it. I am presently dual-booting my Mac into Windows to play, because the Mac client was crashing. I am not a fan of running Windows on my Mac, because all of my keys are just slightly off what I expect. Alt-tab, for example, is Cmd-tab in MacOS, but in Windows the Cmd key is the Windows key and opens the Start Menu. Nothing is 100% as I’m used to and all of these these very normal things are suddenly unfamiliar and throw me off… and the end result is that I’m not a particularly adept dragon rider.

However, it seems awesome. It is fast, and pleasantly swoopy — you swoop up with a powerful burst of wings and then glide, basically, with a small reserve of energy to power the occasional wingbeat when you can’t glide. If you, like me, are not great at controlling your dragon, you can get good views and long glides. If you’re good at controlling your dragon, I suspect you could get around very fast — I’ve certainly seen videos of people zooming around the zone on their dragons as fast as any mount (and probably faster). I’m not that good yet, but I’m looking forward to trying get there.

I gave up on Hearthstone years ago, but if I wanted to poke around and try to get re-started, what would be the best way to go about it?

I happen to agree with Red in the comments here: hit up Battlegrounds! I think the main game is easier than ever, because there is now a core set of cards everyone has, giving you something to build from even if you don’t spend cash on card packs. But playing standard Hearthstone still requires building decks and figuring out strategies.

Battlegrounds doesn’t need any of that. Open the game, click Battlegrounds, and start a match. It’s an 8v8 round robin match where you build your board as you go. You start with three gold, and each round you’ll have one more gold to spend to buy minions or upgrade the tavern to get access to stronger minions. Just place your minions on the board, and each round you’ll be pitted against an opponent — it’s an auto battler, so combat is handled automatically. You just do the setup.

It’s relatively low key, but the strategy of how the game works can get complicated, and it can be engaging. You can play it to just pass the time, or you can get into it. I think it’s the easiest mode to try, and if you like it you might check out the single player adventures or Hearthstone itself.

Whatever you choose, enjoy!

Request4TLiz: Compare the three end raid bosses and give your honest opinion please and thank you!

I liked the Jailer fight. It was a dance, and it required all of us to learn the steps. We usually got a bit better every attempt… sometimes there were mistakes and we’d backslide for a few pulls…. but for the most part it was learning the dance and practicing the steps until we could do it well.

All bosses are like that, in the end, but some are more frustrating than others. Sylvanas, for example, is a very long fight — 15 minutes! — full of hard failure points. It’s meant to be a dramatic chase scene, but it winds up being quite tiresome the dozenth time Thrall summons a bridge that is full of randomly placed holes that you fall through. The challenge of the fight wasn’t the fight as much as it was maintaining perfect focus for fifteen minutes, because everyone in the raid group had to do all of the mechanics perfectly for the whole fight. If you lost anyone, you would have to start over. It was frustrating.

Also I had to play DPS for most of that fight, and I am not a very good DPS, which I am not very good at, and being bad feels bad.

Denathrius? I just don’t like that guy. Nothing else to it.

On the new talent system do we still use a tomb or just have to be in a city to change specs?
Mind you I haven’t raided since Mists but I seem to recall we could use tombs to spec change for raid fights during raids without having to leave for a city.

You can change in a rested area for sure, and I assume there will be tomes as well you can use to swap anywhere. However, Inscription isn’t currently available in the alpha, so I can’t say with complete certainty. However it seems unlikely that there wouldn’t be new tomes this expansion.

Top 3 Dragons in WoW so far, and why?

Internet dragons are the only dragons!

And also Chromie, because Chromie is the closest thing we have to a dragon with any common sense.

It’s not much, but seems to be the best we’ve gotten from the dragonflights.

And that is all, my friends. I hope you all have a good afternoon and a good evening to come. Take care of yourselves and those you love, and give your dogs a scratch on the head from me.