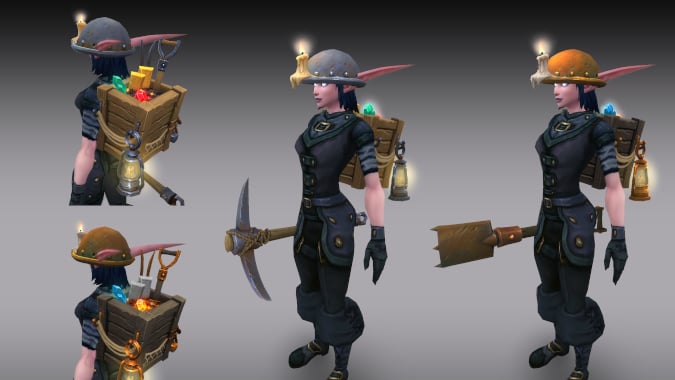 The biggest issue with professions in WoW will finally be solved in Dragonflight with the introduction of profession equipment, which will help characters look the part, as well as provide actual bonuses to the professions. I mean, sure, now a character may pull out a pick to mine that ore, but they never really looked like a Miner. And how serious could you take that Engineer that was dressed like they were ready to raid, or even wearing yeti pajamas, dual wielding trout?

Blizzard recently published two posts explaining some of the changes coming to professions. One section focused on equipment. Fishing rods, Skinning knives, and Blacksmithing hammers were just the beginning. Now every profession will have equipment. Most have three slots of equipment — one tool and two accessories. There will be a dedicated slot to add the equipment so they won’t take up space in your bags, and you won’t need to actively switch out a weapon to the tool as previously needed with equipment like the fishing pole. When the profession is being used, such as at the crafting stations, the equipment will automatically show up on the character, so a Jewelcrafter will look like a Jewelcrafter when Jewelcrafting and a Druid — or whatever class they are — the rest of the time.

However, this equipment will not be used for transmog — at least not in the near future. Blizzard is aware that people will probably want this down the road, but for now it will only show up when the character is actively taking part in the profession, and not any other time. 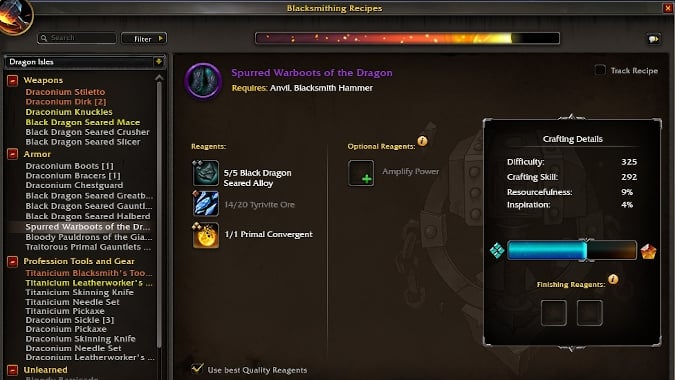 What will profession equipment give characters (besides pizzazz)?

One thing that equipment in general provides characters right now in World of Warcraft is stats. While primary equipment provides stats like Agility, Strength, and Intellect, those do nothing for crafting. Why doesn’t Haste make you craft faster? Who knows. However, Dragonflight is introducing new crafting-specific stats. And while adding optional finishing reagents, like Brood Salt, might increase these stats while crafting, where better to add stats than on equipment specifically made for a profession?

The new interface in crafting will show some of the stats. This helps determine what, if any, finishing reagent should be added, to increase skill or Inspiration, or hold on to what little resources you have. While these finishing reagents may be in short supply, especially in the beginning of the expansion, the better the equipment worn the fewer these will be needed. Improve your equipment to save on reagents used.

But how will each of the professions feed into each other? And what do these tools do? We’re not sure yet — but there’s still plenty more to come on alpha.

Blizzard Watch is made possible by people like you.
Please consider supporting our Patreon!
Filed Under: Crafting, Dragonflight, Dragonflight Crafting, Professions, Transmog
Advertisement