The Queue: Shooting at the walls of heartache 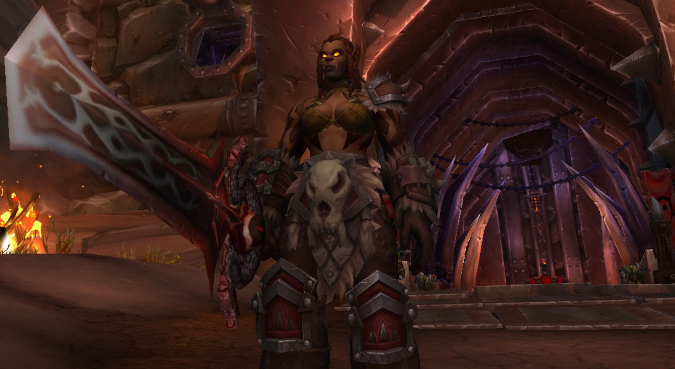 Yes, guys, I’ve been on the Dragonflight Alpha since the Warrior talents came online, I’ve made an Arms Warrior (Horde side) and a Fury and Protection Warrior (both Alliance) for testing purposes. I’ve literally only had a few hours to mess around, and I’m working on a post about what I think. So far, I’m mixed in my response.

Anyway, this is the Queue. Today’s music is by Scandal, with Patti Smyth on vocals, the 80’s classic The Warrior. Because of course it is.

TETSEMI
How much fun will this be?

Warrior – Stances are currently a work in progress and undergoing internal iteration. A large part of their goal is to guide the fantasy of each spec but mechanically, the goal for these is not to encourage frantic stance shifting. But rather switching at certain major points in an encounter, such as For DPS Warriors during a painful AOE damage phase, or for Protection Warrior that are off tanking they may temporarily switch to deal more damage.

I think I still would prefer Gladiator to switch into for DPS, as a tank, but this seems like a great start! Oh my stars.

Keep in mind that Glad Stance was intended as a way for a Protection-spec Warrior to perform as a DPS role (not as a let’s do a little more damage until I taunt the boss again) and that’s not what that paragraph from Kaivax is talking about.

I say this because I do not think we’re going to get Gladiator Stance back. I could be wrong and I would welcome it if I were, but I think the goal is to bring back the classic trinity of Stances, with each specialization getting one for free and then being able to spend talent points on the other two if they wish to.

I hope they make them feel a little more distinct — right now they’re different, but I’d like to see each stance get a little more iteration. Which is what Kaivax says they’re doing, so I’ll take a wait and see approach, but I’m cautiously excited for what’s there right now.

THARAVOL
Couple of questions for the alpha-havers, one a little more technical than the other:
1. Dracthyr – can you use Soar in combat to escape an encounter?
2. I don’t know how much this has been explored, but on saved talent profiles, is there anything in the file system to go with that? i.e., a folder in SavedVariables for the talent loadouts that have been saved.
RG_TSUYOIMONO
making my to-do-before-dragonflight list, so I’m just getting around to leveling my last few crafters and getting the best covenant tmog sets. What’s on your shadow lands bucket list?
PS. Main tmog I need is every NF set except plate. Shouldnt the sets you get from covenant specials (path of ascension, ember court etc) be unlocked on other armor specializations once you’ve completed it? I can’t imagine doing them 4 times.

Honestly, as far as WoW is concerned, the Dragonflight alpha is what I’m playing. I’ve basically retired from Shadowlands. I had a lot going on this year and just couldn’t be playing as much and especially scheduling time to play in group content like dungeons and raids was excruciating. The guild I was playing in when Shadowlands came out is great, a wonderful group of people, but they’re mostly on west coast time and that means the raids started at like 8 or even 9 my time and lasted until midnight/1 am.

I’m really not up for that anymore. Not their fault, just the whole combination of getting old and having stuff I need to do combining to kick me in the butt.

As for your second question, I’m sad to tell you this but apparently Covenant transmogs unlock by armor type.

Some covenant cosmetic sets are unlocked by armor type. These can be unlocked as follows:

WHO’S THE HUNTER AND WHO’S THE GAME, ANNA?

Matt will probably yell at me about this tomorrow (in his kindly, but vociferous, way), but in terms of Warriors as a non-Warrior, there’s “the tank one” and “the other two.” There are lots of aspects of gameplay which closely overlap in the DPS specs, and even though there’s a different feel to how each spec plays, deciding which abilities to put in a talent tree is very tough. It’s tough with other DPS — Rogues have “The Poisony One,” “The Stabby One,” and “The Stabby One That’s A Pirate, I Guess” — but it seems particularly tricky for Warriors.

I mean, you could say that about any class you don’t play, really. Hunters could be the one with a pet, the one who shoots a lot, and the one nobody cares about. Shaman could be the Healy one, and the two that hurt people. Paladins? Tanky, healy and whacky. (Because they whack people and because Ret makes no sense to me.)

Honestly, so far in the Dragonflight alpha it feels  like they’re not having a hard time coming up with distinct talents for Fury and Arms. If anything, maybe they’re too good at divvying up the class. I mean, at this point I’d almost welcome them renaming Fury something like Barbarous Warriors or whatever. 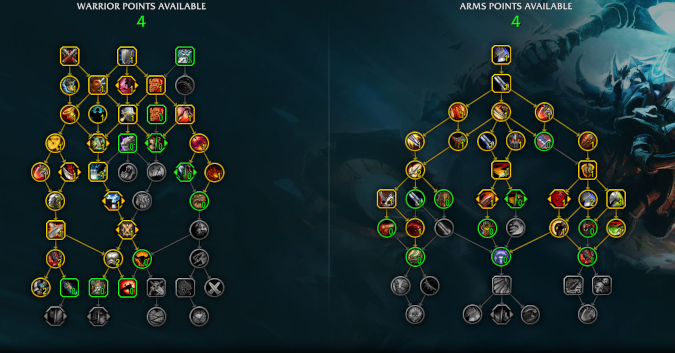 There is just straight up a lot in that talent tree. What’s interesting to me is that certain talents, like Rend, Thunder Clap and Blood and Thunder are all in the class tree, meaning that you can spec to be able to spread rend around to multiple targets (a big part of the Cataclysm Protection approach that I always enjoyed) as any Warrior spec. In other words, there’s a lot in the class tree that I would have expected to see in a spec tree, and that’s refreshing and interesting. 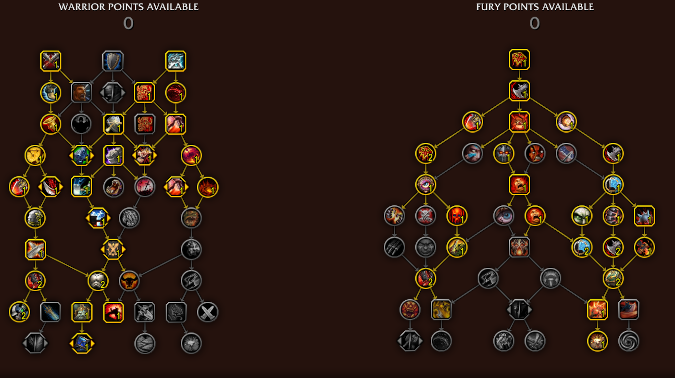 This is a Fury spec I’m messing around with now. I think I may shift more of my Fury talents over to Odyn’s Fury for more bleed spreading, just because I’d like to make the most AoE Fury spec imaginable.

So yeah, that’s the Queue for today. I have my eye injections today but after that I’ll hopefully get some more testing in for y’all. Remember, heart to heart you’ll win… if you survive.

I survived! Eyes hurt though. Like a lot. I don’t think they numbed them sufficiently this time. Probably no Alpha for a few hours.

Blizzard Watch is made possible by people like you.
Please consider supporting our Patreon!
Filed Under: Bang Bang, But I Admit Des Mephisto Has More Warriors Than I Do, I Am The Warrior
Advertisement