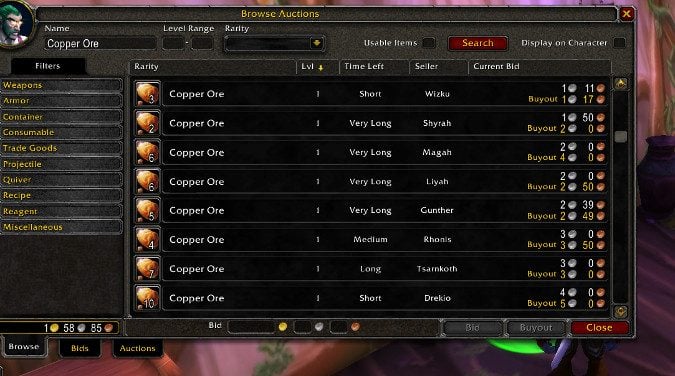 If you’re an auction house maven, you’ll remember when the Mobile Auction House was removed from the WoW Companion app. For a lot of players, playing the Auction House is as much or more a part of their World of Warcraft experience as doing quests, leveling up their characters, professions or even dungeons and raids — and things like giant Brutosaur mounts don’t come cheap.

I find it interesting to read about how the original Mobile AH in the old WoW Armory app actually could be abused to create havoc, such as disrupting the economy in the game and even disrupting the game itself with latency as the servers desperately tried to keep up with the volume of requests. One of the changes they’ve made to this version of the mobile AH is in fact based around making sure the infrastructure doesn’t cause those same kinds of problems.

This time around, you can do almost everything you use to be able to, with one major exception — you cannot list auctions via the app.

The original Remote Auction House was never meant to be a “go-to” tool for hardcore traders. In many cases, these users were already using other addons or external tools to maximize their trades beyond what the app could provide. Keeping this in mind, the new app update provides a way for players to make purchases, view listings, and more. Due to our desire to provide an Auction House experience in a more immediate timeframe, we have excluded listing items for sale.

What Can You Do?

With the WoW Companion App update, players will be able to:

So you’ll still have a pretty wide range of functionality, including the ability to see your currently listed auctions and even cancel those auctions if you want to. But you will not be able to list new auctions from the app — if you have a stack of ore in your inventory you want to put up on the AH, you’re going to have to log in to the game to do that.

Still, if you’re the kind of player who likes to speculate, the ability to buy up all of the latest crisp Basilisk parts and corner the market from the comfort of your bathtub is welcome. I know a lot of players are hoping that Blizzard will in fact expand the functionality, as they’ve hinted this is a first step to let them assess the uses of the feature.

Have fun, you gold-grinding geniuses, now from the comfort of your couch.