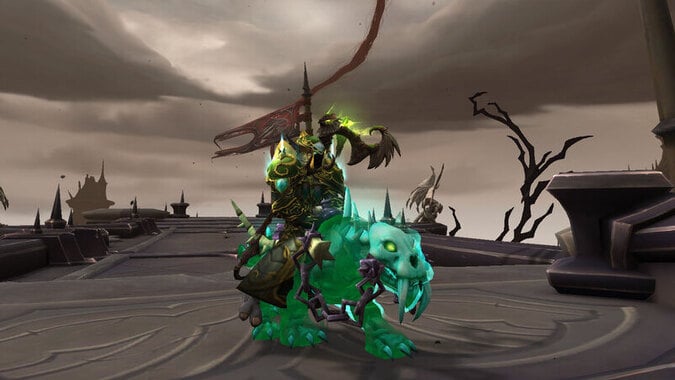 After a long and hard-fought fight against the Jailer, the last Fated boss has fallen to my guild. Here are the spoils of our victory — this ooey-gooey cat.

I will love and cherish him forever, even if I think he could be scaled up a tiny bit more.

While I try and figure out what a jelly cat eats, it’s time for — The Queue.

DOMINOS FALLING, RIOT IN THE STREETS, MOVEWOW THIS TIME, THERE’S NO RETREAT, THERE’S NO SURRENDER

Q4tQ: Do you ever wish to could wear WoW clothes in everyday real life? I mean you can now. But do it so you wouldn’t get lots of strange looks and have people think you’re crazy (lol). There are some that I’d love to wear!

Now do you mean do you wish you could wear branded World of Warcraft merchandise? Because while yes you may get some weird looks, you also might meet some new friends who want to talk about the game. It’s not illegal, you can wear a shirt with the faction symbol on it you most like!

Or do you wish that you could go stroll down the street in a full set of Druid tier gear? If I saw someone walking down the street in a full set of (insert class here) gear I would probably think that there was a convention nearby that I didn’t know about. I think that it’s probably nicer in theory though than in practice. Have you actually looked at some of our sets? If you didn’t accidentally poke someone’s eye out on the shoulders… all of that metal and leather probably weighs a ton.

A MUSEDMOOSE IS RISING, A SHADOW FROM THE PAST

Q4tQ: what do you think the Legendary situation will be in Dragonflight?

As far as I know, nothing has been datamined for legendaries, so we can probably rule out a drop system like Legion, or a DIY system like Shadowlands. So I’m guessing we won’t see any legendaries until a later patch. I’m hoping it’s something like MoP, WoD, and BfA, where we get to build a new legendary and there’s a storyline that goes with it.

A full storyline that leads up to a legendary is always fun. The first time anyways. It can lose some of its luster on the second or third alt.

That also leads to a nice power spike the first week they become available where everyone is suddenly doing more damage and you can beat some of the tight timings in fights. It was really noticeable in Shadowlands as we got our Unity pieces and everyone doubled the number of legendaries they could wear.

I do hope that there’s at least one more single drop legendary that shows up in the expansion though. Something similar to the Sylvanas bow or Warglaives. Assuming it was for 2h Agility users. It’s about time that there’s something for Guardian, Feral, Survival, Windwalker, and Brewmasters to play with!

FEEDING THE KALCHEUS WITH FIRE, ON THE EDGE OF FURY

Apparently I won another Unclaimed BMAH Container last night (I didn’t expect to). And I got … Mimiron’s Head!!!!!!! … which I already had. WOMP WOMP.

IF WE GONNA MAKE IT LIKE A TRUE BENDOVER, WE NEED SOME ACTION!

QftQ: We’ve now seen older expansion Dungeons be part of the M+ system? This has largely been considered a success, at least in concept. Fated Raids have also been overall a good thing, and a way to make old Patch content relevant. It’s reasonable to expect this to continue and evolve in Dragonflight.

What older Dungeons and Raids do you want to see in new M+ and Fated Seasons? Even if they might require a bit of reworking, what do you think would be good fits for the systems?

For Dungeons, I kinda think the Stockades might be an interesting choice. Would require some big changes to scaling, and mechanic changes, but it would be a blast from the past. Stratholme, both wings, would also be cool, with a few updates. I think anything before Mists would require more work from Blizzard, as they are mechanically quite simple, and just scaling numbers up doesn’t make them fun to do.

As for Fated Raids, Throne of the Thunder King would be awesome. Ulduar might be an interesting, as it already experimented so much with various mechanics and difficulty modes

Throne of Thunder and Ulduar are definitely at the top of my list for best raids in Warcraft. I also would put Firelands, Hellfire Citadel, and Ny’alotha up there.

However, I’m not sure if they’ll choose to go the route of bringing old raids up to be part of a future Fated season at the end of Dragonflight. It’s tough to bring an entire raid worth of enemies and spells up to current content scaling without horribly breaking anything. With Nathria and Sanctum, we were still in their expansion so everything worked more or less like it was supposed to, once they got the health and damage set. There’s nothing that they have to worry about interacting poorly with a new spell, or a mechanic that doesn’t work at all since one of our spells doesn’t work like it used to. Imagine having to do Yogg-Saron now as a hard fight without being able to throw cleanses out liberally, there are so many tentacles debuffing people!

I bet that most of the dungeons we see brought forward are from Mists of Pandaria and onward. Those already had Challenge Modes as part of their design, so it probably wouldn’t be that hard to tweak them for Mythic Keystones. Stockades should in theory work as a Keystone dungeon, but it does feel really fast, despite the fact that it has five to six trash pulls between each boss. Maybe it’s just not beefy enough trash. Someone should go arrest some Ogres and see what that does to the dungeon route…

Have an action-packed week everyone, and don’t forget to leave Anna lots of questions for tomorrow!