How do in-game currencies affect your game experience? 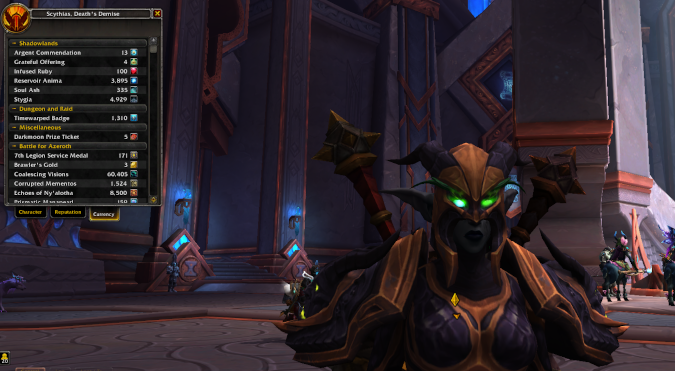 I feel like it’s fair to say that by the end of Shadowlands (if you’ve been playing this whole time), you are running around with a fair amount of currency. Heck, I just recently started playing again — mostly in Dragonflight‘s alpha, were I to be honest — and you can look at that big old list of currencies that my only recently unretired character has to keep track of. Once I get to Zereth Mortis, it’s only going to get worse.

So honestly, I kind of don’t even want to bother. It’s a lot to keep track of for rewards that I’ll hopefully be replacing as early as October (but who am I kidding it’s not going to be in October) and I’m kind of suffering full on currency fatigue. But at least I’m not a dedicated Hearthstone player focusing on Battlegrounds, because a whole host of changes for that (included a new Battle Pass kind of system which replaces the long-used Gold most Hearthstone players would recognize with Runestones).

What are Runestones? Well, they’re a brand new currency that will probably remind you of the Diablo Immortal orbs. It did me, for sure. I mean, it also reminded me of back when you couldn’t spend real money to buy Xbox games and instead had to buy Microsoft points and then spend those Microsoft points to buy things from the Microsoft store. Why do we need another step between spending money and getting things in Hearthstone? To avoid regulatory legislation? Out of a love of overly elaborate currency exchanges? I honestly have no idea.

Between in-game currencies that require you to essentially treat playing a game as a second job and weird pseudo-money that you have to spend money on so that you can then buy things with it, I feel somewhat discouraged. But what about you all? How do you feel about all of these weird non-money monies?

Blizzard Watch is made possible by people like you.
Please consider supporting our Patreon!
Filed Under: Currency, In Game Currencies
Advertisement