The ‘Stealth’ keyword is finally making its way to Hearthstone Battlegrounds 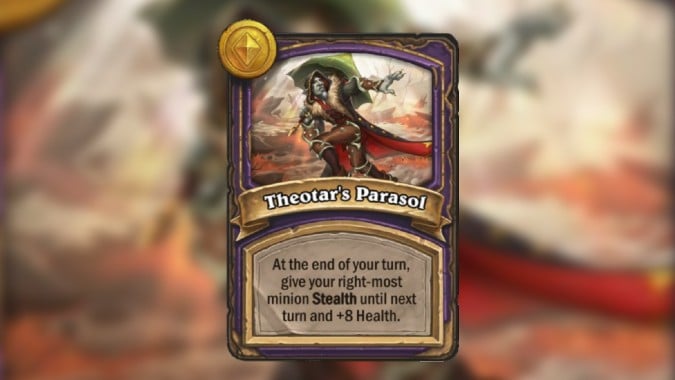 One of the few basic keywords from constructed Hearthstone that still hadn’t made its way to Battlegrounds was Stealth — but that’s about to change. Following the initial announcement that Quests and Rewards are coming to Battlegrounds on Season 2, we’re now getting the good old community reveals of said Quests and Rewards — and one of those ended up unceremoniously showing the Stealth mechanic.

Pro player awedragon got the opportunity to reveal four of the upcoming Quest Rewards — and among them is Theotar’s Parasol, which can grant Stealth to one of your minions.

Theotar’s Parasol
At the end of your turn, give your right-most minion Stealth until next turn and +8 Health.

Within the Twitter thread where he made the reveal, people started asking questions about how, exactly, Stealth would work — and Game Designer Dominic Calkosz took to explaining things.

Basically, a minion with Stealth will not be targeted by enemy minions until it attacks itself (since attacking causes it to lose Stealth). However, there are several caveats:

Now that we know this keyword is being implemented into the game mode, it’s only logical to assume that it won’t be relegated to a single Quest reward — and from a temporary event, even. Eleven minions are being added to Battlegrounds on Season 2, and only two of those have been revealed so far — it’s possible that at least one of the ones that haven’t been revealed yet might come with Stealth as well. And even if that’s not the case, the groundwork has been laid for it to be done in the future.

Lots of players have wondered how Stealth could work in Battlegrounds for years — and now they have their answers. It’s definitely possible that the keyword is here to stay, and we might end up seeing it in future minions, or even in other mechanics like Spellcraft cards.