What does it cost to skip the Battle Pass in Overwatch 2? Let’s do the math! 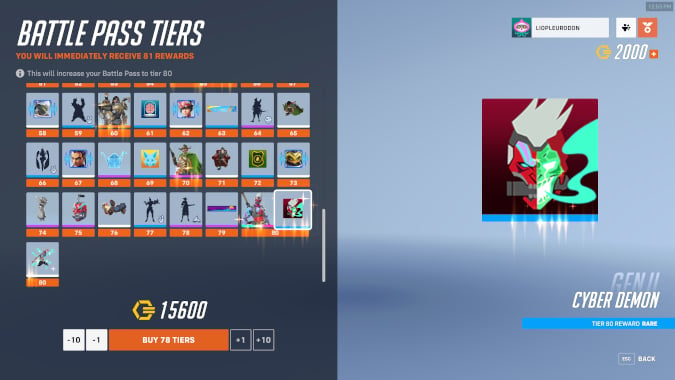 Overwatch 2 monetization via the new free Battle Pass and Premium Battle Pass is a hot topic but, much like turtles, it’s microtransactions all the way down. In Overwatch 2, you can skip over the whole “earning your way through the levels” aspect of the Battle Pass system and just buy tiers. All the way to the top, if you want. So how much will this damage your real wallet? Well, it depends.

The cost to purchase each individual tier is 200 Overwatch Coins. This never changes. There’s no bundle bonus — if you buy one tier, it’s 200 Coins, while 10 tiers are 2,000. The tier number itself doesn’t matter, either. If you’re at tier 77 and just want to spend your way to tier 80 to cap out the season, each of those levels will still cost 200 apiece, same as if you wanted to go from tier 7 to 10.

So, as such, the math in Coins is pretty simple. If you want to just buy your way to tier 80 the first time you boot the game, it’ll cost you a cool 15,800 Overwatch Coins — you earn the first tier for free by logging in. Of course, if you’ve already leveled a few times before you open up the purchase interface, you won’t have the option to purchase those tiers. In the above screenshot, I’d already leveled my account to tier 2, so my total cost to buy my way to tier 80 is 15,600 Overwatch Coins, i.e., the 16,000 total for 80 tiers minus the 200 each to cross the threshold for the first two tiers. 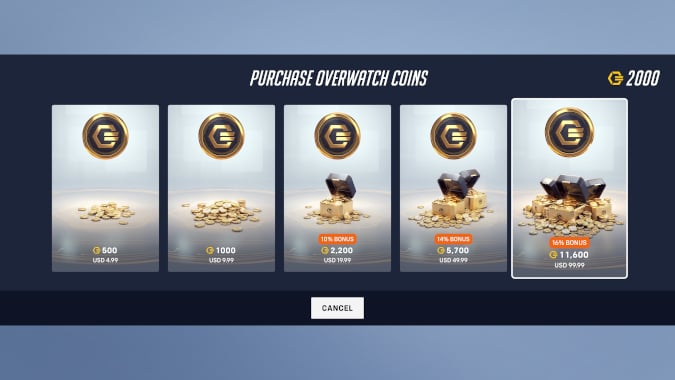 What will the Overwatch 2 Battle Pass cost in real money, though?

In terms of real money, that’s where things may get a little weird. Not only are there exchange rates and globalization to take into account, but even the amount of coins you get for standardized USD will vary based on the amount you purchase at one time:

Therefore, while we can’t say for certain exactly how much cold hard cash you’ll be throwing at your monitor to buy your way through all that leveling, it’ll be in the ballpark of between $115 and $140 to purchase the Overwatch 2 Battle Pass, assuming you’re buying some amount of coins in bulk and are purchasing your way to tier 80 the instant you log in for the first time.

How does the Overwatch 2 Battle Pass compare to Fortnite’s Battle Pass?

This is a little more expensive than it costs to buy your way to the seasonal level cap in Fortnite, which has a nearly identical Battle Pass leveling system — and a way to bypass that leveling system. In Fortnite, getting to the cap of 100 costs 150 V Bucks per tier — so 14,850 V Bucks total, with a bundle of 13,500 V Bucks for $80 or 1,000 for $8. (There’s also a monthly subscription option for $12 that includes the BP and V Bucks for goodies, though that’s a slightly different beast.)

Plus, remember your progress through the Battle Pass, both free and premium, resets at the end of every season, with new rewards tied to another set of new tiers. With each Overwatch 2 Season lasting roughly nine weeks, assuming the same number of tiers for every battle pass, at the end of a year you’ll be spending — and again, given the nature of sliding scale currency and bundle bonuses this is a rough figure — around $700 USD per year if you want to skip each and every Battle Pass. And that figure does not include the cost of the Battle Pass itself (which will add another $50 or so).

However, remember that you’ll still earn Battle Pass tiers just by playing. While I was playing in the alpha, I would gain a tier every couple of matches despite not being a stellar player. If you casually play a few matches every day it’ll likely take you much of the season to hit level 80, but it’s not at all an unobtainable mark to meet as long as you play consistently. In some ways, I balk at the idea of somebody just plunking down their credit card to make it to cap on day one, and the numbers for doing so seem kind of shocking. However, I’m reassured at the idea that, if I have a month where time is tighter than I realized and I might not get that really cool skin I had my eye on, I can pay out a few hundred coins at the last minute so that effort isn’t wasted.