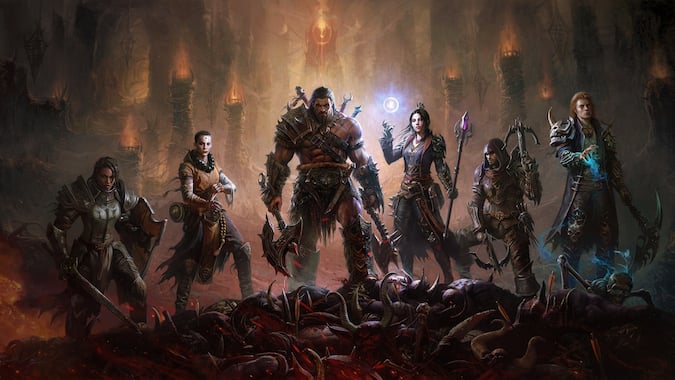 Diablo Immortal’s first major content patch is now live, bringing quite a few changes to the game, like the game’s first new dungeon, Silent Monastery and the new Helliquary boss, Izilech the Misshapen. But new dungeons and bosses are kind of expected in a big patch. One of the more unexpected changes was a revamp of Warbands and the addition of Castle Cyrangar, which Warbands can clear of monsters and take over as a sort of guild housing that provides Warbands a variety of benefits.

Warbands are still a somewhat difficult prospect, consisting of only eight members who have to work together to accomplish Warband-specific goals. This patch has loosened some Warband restrictions — for example, to do a Warband Helliquary Raid, you only need half of your Warband to participate — but the design of Warbands can still be difficult to work around. But Castle Cyrangar is something new, and unique to Diablo Immortal.

So let’s take a look at exactly what Castle Cyrangar means for Warbands and Diablo Immortal as a whole… as well as why I, sitting down to write this post, desperately wish that World of Warcraft would just lift the whole concept and put it into WoW? 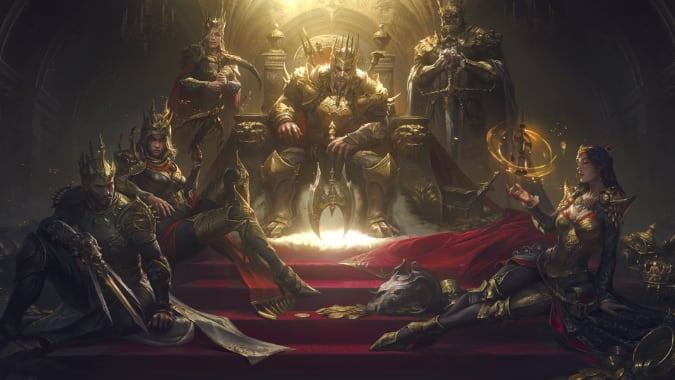 Warbands have been controversial since Diablo Immortal‘s launch. They’re similar to a Mythic+ group from World of Warcraft — a small group of up to eight players that tackles the various content of DI, with rewards for doing so. Warbands fill the adventuring party niche that tabletop RPGs and games like Baldur’s Gate have: they’re a strike team instead of a big sprawling tribe or nation. You can join a Warband as soon as you complete the first act of Diablo Immortal, unlocking it on the game’s menus.

Some players find the format frustrating, because it’s tied to such a small group of players. Finding such a small group that can — and must — all play at the same time can be a challenge. That means people can frequently cycle through Warbands in search of a compatible group, so these groups can be tenuous and unstable.

This update has made some Warband activities easier to complete, and made others more rewarding. It doesn’t make Warbands any easier to find, but does give players more incentive to stick by their Warband. Here’s a rundown of the changes in this patch: 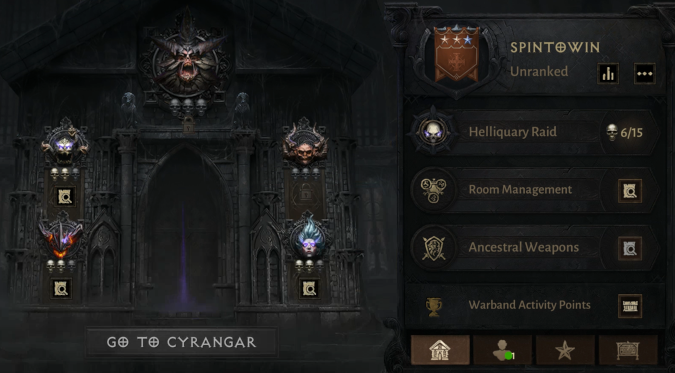 Castle Cyrangar is mix of guild housing and roguelike dungeon

But it’s Castle Cyrangar that’s really interesting part of the Warband updates. It’s reminiscent of a combination of the Garrison from Warlords of Draenor and Torghast from Shadowlands, letting Warbands explore a long-abandoned ruin and make it into a home base for their group.

Initially, Castle Cyrangar plays like an original Diablo dungeon crawl, with a randomized dungeon that’s different every time you play. You dive into the dungeon solo or with as many other players from your Warband as you can gather up. As you fight your way through the depths of the castle, you freeing tormented Remnants from their endless imprisonment and gain powers for doing so. You can do this as many times as you want, making it an endless activity for solo or small group play. 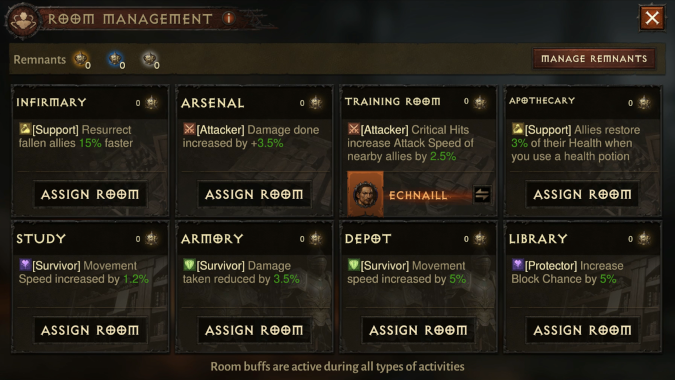 Going through the dungeons underneath Castle Cyranagar feeds into the Warband Rooms feature of the castle. Once you’ve cleared the depths of the castle for the first time, your Warband will unlock specific rooms that can be assigned to each player. Each room has an in-game benefit for the player assigned to it, and as you kill more Remnants, you can add more special powers to rooms in the castle, buffing the in-game benefit of the Rooms. The buffs from these rooms persist outside of the castle, and work in all activities in the game from Rifts and Dungeons to Raids and even the PVP Circle of Strife.

Your Warband can take part in the Defense of Cyrangar once you’ve claimed it. This is a combat mode not unlike Diablo 3‘s Echoing Nightmare with two modes: Standard and Endless. Standard pits you against eight waves of monsters, and Warbands can complete it once a week for experience and loot. In Endless, you try to kill as many waves of demons as you can, with a score generated by how well you doL kill more demons and you get a higher score and a better spot on the leaderboard.

Unlike the Depths of Castle Cyrangar, the Defense of Crangar is a group activity, so you’ll need to gather up your Warband to complete it. 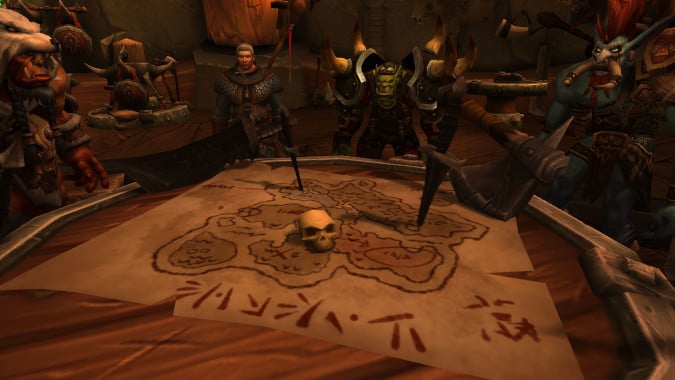 Could other games learn from Castle Cyrangar?

The way Castle Cyrangar works is pretty elegant to my eyes. It’s not necessarily original, as both self-contained roguelike dungeons and player housing have existed for a while now, but it’s a neat synthesis of the two ideas, and it’s something other MMOs could benefit from copying in my opinion.

World of Warcraft, I’m talking to you here.

All Castle Cyrangar would need to become Kryptonite to a host of players would be some form of room/building construction. Imagine if you could take over Torghast, make it your own, and add a series of bright colorful pavilions around the base just to annoy the various edgelords of the Mawsworn as they watched you festoon the place with pretty flowers?

I think these changes will go a ways towards making Warbands more interesting for players, as well as letting players feel like they have stuff to do with their Warband even when not all of them are on. But this still doesn’t address all player concerns, like how hard it is to find a Warband, and the challenge of staying active in both a Warband and a larger Clan, which offer different benefits. And with Castle Cyrangar, players will feel even more like playing in a Warband is required.

However, it’s a big step towards making Warbands more interesting, and offers more incentives for small groups of players to join up. And if it’s successful — well, we’ve seen Blizzard take ideas from Diablo and add them to WoW before.