The Queue: I don’t need a friend; I need a rabbit 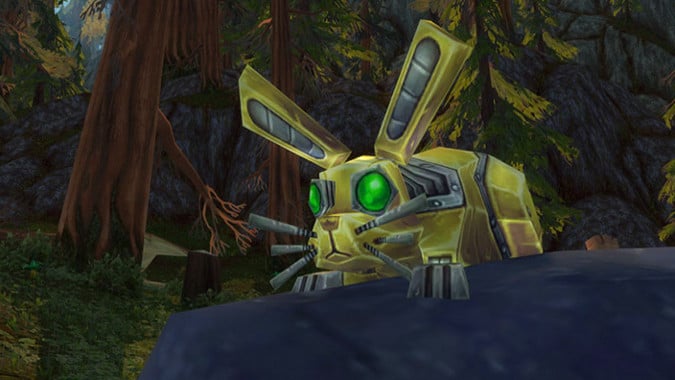 This week has been pretty quiet — not because it’s been slow or anything, but it’s literally been very quiet because I’ve had the house to myself. I mean, I have cats, so it’s not entirely quiet. But it’s quieter than usual.

So let’s find each other some company here, in The Queue.

Q4tQ: Since Dragonflight is more Azeroth focused, what would you wager the odds are for the Brawler’s Guild opening up again? Would you like to see it remain at its old location, or set up shop somewhere new?

I’m definitely curious about this. Not because I don’t think it’ll come back, but because 10.0 does feel like a different era of WoW, and I’m curious how much of the older content this dev team wants to utilize.

For simplicity’s sake, the old locations make the most sense… but that’s no fun. I’d love to see a new Brawler’s Guild set up somewhere — doesn’t even have to be the Dragon Isles! It might be fun to see the Brawler’s Guild become a moving thing with each expansion, kinda like Nesingwary or the fighting pits we’ve seen.

Either way, I’m not actually sure it’ll come back. I kind of hope that if it does, it’s totally new.

TRISTAN2004’S TEAM IS GETTING TOO COCKY, STAR FOX:

This happens in a lot of games, and I’ve already seen plenty of Splatoon matches lost because a team thinks they can push farther into enemy territory when we really (technically) only need to win the game by 0.1%

Maybe it’s just human nature to chase that excitement. After all, there’s a lot of risk in spawn camping like that after a solid push, but the reward for successfully holding the enemy back until the end is also very satisfying!

…it just usually doesn’t pay off.

Q4tMitch: I don’t want to go to work tomorrow. Mitch. Please use your great and terrible power to erase all of southern San Antonio from existence, so that there will be no workplace to attend. I’ll be your bitter, nihilistic skeletal servant for eternity.

Well, I’m not sure about erasing it entirely. I feel like that might be unfair to some folks. (Also, the reason the house is empty is because the GF is in Texas, and I feel like that would just be rude of me.)

But here’s what you can (maybe) do: Use this energy to schedule PTO! Or call off and take the hit. No one’s forcing you to go except  s o c i e t y.

(“Society,” in case anyone is using a screen reader or the like.)

If this place doesn’t liven up when DF releases, I’m gonna have to do something drastic. Like, pay more attention to my kids and career.

Those both sound like very gross and unfun things, so for your sake, I hope so too!

But for real, this happens during pre-expansion lulls a lot. I’m not saying DF will jump us up to heyday numbers, but it’ll definitely bring some folks back.

Also, like others have pointed out, the prominence of Discord communities — which, we have one and you can see Staff chat as part of the $10 tier — as well as a lot of lurkers means the comments get kinda quiet. Truthfully, a lot of our traffic comes from searching — when’s the last time you Googled something, found a website you only vaguely know, got the info you needed, and then stuck around to leave a comment? It’s definitely not common, and the articles people DO feel the need to comment on are usually more controversial.

The other part of it is that we pretty recently put out a call for writers so we can hopefully get more blog-like content out. A lot of us have day jobs, and yours truly especially always thinks he can take on more than he really can, so at the end of a long day, the writing doesn’t flow quite the way it used to.

But yes, I feel this, and I really do want the BW community to thrive and grow for a long, long time.

Q4tQ: Does anyone know how Casper The Friendly Ghost died?

Casper the Friendly Human was unfriendly just once in his life — but that’s all it took for him to be struck down by the hands of an angry god. He’s now forced to be friendly for all eternity, as punishment for his one single misdeed.

As far as I know, there are only a handful of them, and I’m guessing they don’t get much attention because their design limits their use. So I get why there aren’t too many of them.

But on the other hand, this game has been around since 2004 and we still don’t have a giant shark for a mount, and that just seems wrong.

I admit, I like collecting them when they do get added (like the Fishing turtles, if those count) but I almost never use them. I would absolutely love to, though!

Blizz can either do something silly like give the mounts a Sandy Cheeks style helmet on air, or they can make more underwater-friendly content. I’m still not sure people are ready for that, though. Plus, whenever we DO have to go underwater, the questgivers usually provide breathing and speed if we’re really gonna need it.

So TL;DR, I like them and want more, but I don’t see a practical use for them anytime soon.

That’s our Queue for this week! I hope you all have a lovely weekend, and please remember to leave questions for tomorrow’s writer! Praise Yogg 💜🦑🖤