The Queue: Looking good (or trying to) edition 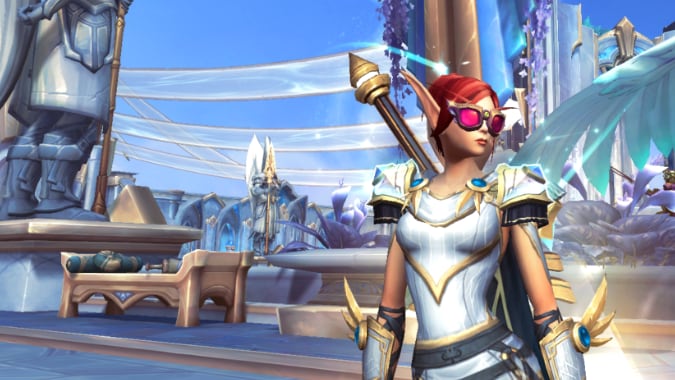 Today’s Queue is all about hot transmog, hot chocolate, and chill weekends. So let’s get to it and Queue!

Q4tLiz — if you had to pick one transmog for your paladin for the rest of her character life, what would it be

Maybe not a complete transmog — I’d tire of it eventually — but for quite some time I’ve been wearing Rhinestone Sunglasses. They are a key part of my Paladin’s look, and I don’t think I will ever leave them.

My friend Rades, Mike Eng, whom you may have known as our Holy Paladin writer on both this site and WoW Insider before, or as one half of the From Draenor with Love comic, had a Blood Elf Holy Paladin named Fabulor. He was a master of transmog, and changed it up a lot, but these sunglasses were a key part of his look, part of what made Fabulor Fabulor.

When I went back to playing my Blood Elf Holy Paladin a few years ago, I joined Rades’ former guild. He’d moved on from the game, and from the site, but we still talked and I delighted in his D&D tales. (He gave me some great advice when I started DMing myself.) I was the only Holy Paladin, and at times the only Paladin at all. I felt like I had a responsibility to live up to his example and be the most fashionable Blood Elf I could be. (I kind of preferred the Bronze-Tinted Sunglasses, but they’re only available during WoW’s anniversary event, and I couldn’t always just not wear a helmet to physically put them on. Though sometimes I did.)

Ever since Mike passed away in 2021, I’ve always worn the Rhinestone Sunglasses transmog. I think about him, at least fleetingly, whenever I open the transmog menu, whenever I log in for raid night, and I keep wearing my sunglasses.

I’m pretty sure my paladin wants to be @_Rades when she grows up.

@Faience Does she have a sweet mog?

My main has been an undead warlock since Cataclysm. (I tried out a lot of toons during Wrath, so I can’t say I had a proper main in that expansion, but I did play that warlock a lot). However, Shadowlands is making me reconsider… I am really loving guardian druid and marksman hunter. I might change mains and just keep my warlock as an important alt. (I won’t be doing evoker beyond making one and fooling around.)

What about you? Any plans to change mains in Dragonflight?

I actually had a different answer to this question before I wrote the above, because I’ve been a bit wishy-washy about Holy Paladins lately. I’ve been toying with alts more lately — it’s the end of the expansion and I’m done raiding, so I have time for it — but there’s nothing I’m really in love with, and I have a sentimental attachment to the Paladin. This is the same Paladin I rolled way back in Burning Crusade, when you could first make Blood Elf Paladins. I’ve taken breaks from the Holydin over the year, but there are a lot of memories tied to this character, all the things I’ve done with her, the people I’ve played with, the trouble I’ve gotten into. And it’s kind of hard to walk away from that.

Also I’m intrigued by the talent trees. They’re not everything I ever wanted, but there are some interesting options and I want to try them out when they go live, and play around with different builds.

It’s possible I won’t enjoy it and I’ll play one of my alts — I have a Druid, Shaman, and Monk modestly geared and ready to go, I’m working on getting a Warlock through Winds of Wisdom, and I still have a Dragonflight character boost, so I have all the options I could possibly want.

In the end, it’s about finding what you enjoy playing, and enjoy playing with others and works well with your group (if you’re a fan of grouping). There’s a happy spot there, and I hope you all find it and have fun in Dragonflight, whatever you wind up playing.

Q4TQ (or whoever wants to answer it):
I’ve been officially “quit” for nearly a year, and I’m still undecided on whether or not I want to come back for DF. One factor for me is whether or not my once-robust, but now fairly outdated pc can handle it. Is DF (or at least the pre-patch) on the PTR so I can test it out to see how well the old beast can handle it? I might play for a while, but I’m definitely NOT buying a new computer just for this. (Even if the old thing has started making noise sometimes.)

The Dragonflight system requirements are bumped up from Shadowlands, but WoW does typically run on systems with below-average specs. You may not be able to run it at anything resembling a good resolution, but you can usually play with relatively low specs.

QftQ: What would be your scenic hike(s) of choice in Azeroth? Would you join the AAA? The Amblers Association of Azeroth, that is. Or would you prefer a cruise?

Skiing in Storm Peaks, as long as there’s a warm fire and some hot chocolate at the end.

Do you have any fun plans for the weekend?

We’re taking a short road trip to take in the rest of the good weather and just to get out of the house.

I’m working on some alts in WoW, plus casually grinding out anima and stygia to buy some transmog sets — but I’m only really working on that as there are good opportunities to do so, like when I can do world quests for 500 anima at a go. I’ve also just started working on a ghost playthrough of the Dishonored 1 DLC. Ghost is where you don’t kill anyone or let anyone see you, and it can be rough — I’ve done it on the main game for 1 and 2, but not the DLC.

Maybe also I will take some naps.

And that’s all today. I hope y’all have a great Friday and a good weekend to come.