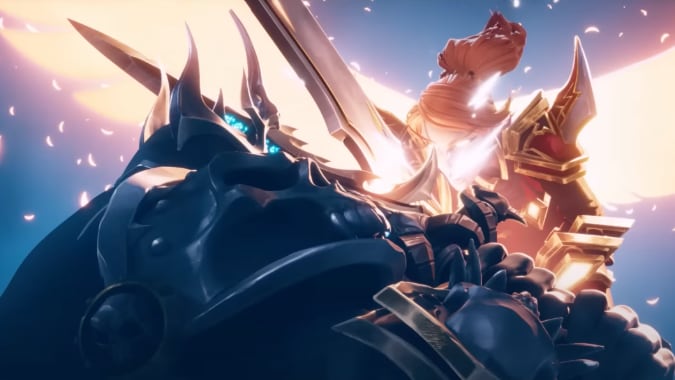 The Hearthstone March of the Lich King trailer is just so good you guys. I don’t even have the words for it, so instead I’m going to try to find some words to answer your questions. Let’s Queue!

Do you think it would be easier to open Dracthyr to more playable classes in future expansions than to create a whole new race? And would that be okay with players?

I think so. They’ve already done the graphical design for them and gone into a ton of detail on customizations. It makes a lot of sense to use the base they already have here and expand it rather than starting over with new designs.

Will they? I don’t know, but I hope so, because I’m super into being a dragon but I’m kind of indifferent to Evokers.

We got Apple her special kidney food and for the first couple of days she inhaled it. Now, she eats the wet food and won’t touch the kibble. I’ve tried mixing it fairly throughly but she still kind of ate around and licked off the wet stuff.

What else can I do to encourage her to eat the food she needs?

Depending on their needs, you might try putting some oil on it. I always gave my doggos a little fish oil on their food — it was good for their coats (lots of tasty omega 3). You could also try olive oil, which is the same but less omega 3, I believe. Dad likes to put some bacon grease on his dogs’ food… not really the same, but they certainly enjoy it.

Of course no one thing works for every dog. Abby really liked pumpkin, so I put a little canned pumpkin (if you do this, be sure to only get 100% pure pumpkin, nothing else) in her food. (Just enough to mix it with the kibble.) You could also add some chicken (plain chicken breast, boiled, then chopped or shredded), which I have always found dogs love… but could be the same problem in that they’ll eat the chicken but nothing else. (In fact, it almost certainly would be.)

anyone know if the Primal Storms event is going to be worthwhile for leveling? didn’t know if anyone had noted xp gains in the short time the event was available to test

I know the Legion event was amazing for leveling. I leveled a Death Knight from nothing to max during that and just zoomed.

However… Leveling is wildly fast with Winds of Wisdom right now. And we’re going to get Darkmoon Faire this weekend for more bonus XP. WoW’s anniversary event also starts this weekend for yet more bonus XP. But Winds of Wisdom will end on the 15th when the event begins, and Darkmoon Faire ends on the 12th. The anniversary will be ongoing, but leveling through the event could still feel slow by comparison. Possibly really slow.

If you want to get some leveling done, I’d work on it this weekend and next week. Leveling should still be pretty easy during the event, but it’s never going to be easier than it will be next week.

Q4tQ: would you play a Muppet D&D game?

Yes. Of course. Obviously. Who wouldn’t?

Question for anywhere: Do we know if there are any equipable reagent bags in prepatch, or do we have to wait for the new professions to have them crafted?

Nope, you’ll have to wait until Dragonflight.

Did you go for the year subscription deal? Why or why not?

I did! I’m going to be subbed for the next year anyway, so I may as well get extra mounts out of the deal, and the beetle is just really fun.

Will I use it all the time? Probably not, especially since we’re heading into Dragonflight with Dragon Riding, but it’s cool, and for me basically just an extra perk on top of something I’d do anyway.

Are you excited the Lost Dwarves are going to be in the new dungeon wing of Uldaman?

No, but I am excited about Liadrin in that Hearthstone trailer. I mean, gosh. Be still my heart. 😍


And I’m going to say that’s all for now, my dear friends. Go out there and have a great weekend (or sit inside and level some alts, which is what I’m going to do). Take care, everyone, and I’ll see you back here next week.