The Queue: The joy of being a dragon 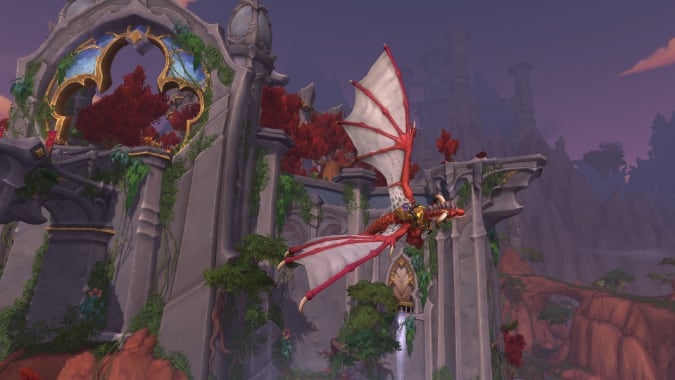 Dragons are just great. I mean really great. Who doesn’t love dragons? Let’s talk about dragons in the lead up to getting to be dragons.

QfLiz: What talent in your main class spec’s trees best describes you?

I’m going to go with Holy Shock. It’s the very top of the tree, and it’s really the core Holy Paladin ability. It’s a short cooldown that can be used to heal or deal damage, and it puts a Glimmer of Light on whatever target it touches — doing a small amount of healing or damage to everyone with Glimmer when it’s cast.

It’s versatile. It can be used to help one person a lot and help your group a little all at once. It’s a pure bolt of light. On one hand it is healing, it is hope — and on the other it is righteous judgement on your enemies.

Q4Liz: Favorite thing from each expansion and go! It could be a memory, a piece of gear, a fight — just things that really stand out to you when you think back to those expanisons.

Vanilla: WoW wasn’t the first MMO I played, but it was the first MMO that I played seriously… and considering where I am today, it changed the entire course of my life. I’d previously played MMOs as mostly solo games, but here I did dungeons and raids. I was in a realm first raiding guild, working as part of a massive team to take down the game’s biggest threats. I wasn’t just playing a game, I was part of a community of people hundreds, thousands, tens of thousands of people. I made real, genuine friends by running dungeons.

I look back and I see many flaws. Design problems. Frustrating mechanics. Intense demands on my time. I’m not actually nostalgic for it, and I’ve only played Classic very casually. But at the time, this game was everything.

The Burning Crusade: So many things. I rolled my Blood Elf Paladin when the expansion came, and it was a sea change in how I played. I’d only played cloth classes before — my main at the beginning of the expansion was a Holy Priest — and I was tired of being squishy, tired of not being able to solo. (This was, you may remember, before dual specs were a thing.) The Paladin was tough, and with the aforementioned Holy Shock, I could solo without too much trouble — certainly I could do things more quickly and more safely than my Holy Priest could. I remember going up to the top of Black Temple, which was just full of trash mobs that could drop rep tokens, and pulling a half dozen of them at once. I didn’t do a lot of damage, but they couldn’t kill me, and I’d farm rep that way, solo. (A Protection Paladin could pull a dozen at a time and do the same thing, but Holy was quite capable.)

I also made friends with a Warlock, who I think was named Hanthan. I was always complaining about being cold, and one year for Christmas he sent me a blanket. I still have that blanket, and pull it out whenever it gets cold, and wonder where he is today.

Wrath of the Lich King: World of Warcraft has always had a story, but Wrath brought it to life in new ways. Northrend felt down to earth, it felt real in a way that TBC — with its vibrantly colored, over-the-top environments — never had. I wasn’t raiding at the time, but I probably ran every dungeon in Northrend a hundred times. The music was a particular stand out, giving each zone a particular atmosphere. The Dragonblight theme still gives me chills, that little piano line.

And then there was Wrathgate. In-game cinematic are common now, but they just weren’t a thing back then. The Wrathgate cinematic played after you completed a quest, and it was entirely unexpected. It blew me away. Everything about Northrend was magnificent.

Cataclysm: This was literally the expansion that made me quit the game. Holy Paladins were turned upside down and I didn’t even know what my class was anymore. I appreciate what it did to the old world in hindsight, but at the time I was at such a loss. I probably needed the break.

Mists of Pandaria: I rejoined the game late in Mists, and rolled a Monk. (Get it? Rolled!) The environments were more detailed than they’d ever been, and for the first time it really felt like we’d left Azeroth behind. The game leaned hard into phasing this expansion, which was used to drive story in a huge way. I was horrified watching the Jade Serpent statue crumble, seeing the devastation of the Vale.

But what a world. Unlike Outland and (most of) Northrend, Pandaria felt like a hospitable place where you wanted to stay… which just made the way we wrecked the place feel even worse. But we had our little farm, and you could always skip the last quests in the Jade Forest and pretend that whole thing never happened.

Garrosh and the long end of expansion lull rather tainted Mists for everyone who played, but Pandaria was an astonishingly beautiful place.

Legion: Class Hall quests stole the show for this expansion. It was so interesting to have these wholly different narratives between classes. Some of the class narratives were less exciting than others — I am still a little bitter that all Monks did was make really good beer while Death Knights had this game-changing quest in which they raised a new Four Horsemen and invaded Light’s Hope Chapel to steal Tirion’s body.

I guess it’s fine, because after the expansion everyone forgot about it. But those quests were fantastic, and gave the expansion a really unique flavor. Artifact weapons and their associated quests added more lore and more unique experiences for each class, too. (I still use the Silver Hand transmog all the time.) It felt like you were really playing your class, not just the same game everyone else was playing.

Battle for Azeroth: Dazar’alor stands out to me as the best storytelling Blizzard has ever done in a raid. It told the story of the invasion of Dazar’alor from the perspectives of both the Alliance and the Horde, with a unique experience for each group — and unreliable narrators telling the story. If you go through as Alliance, you see Mekkatorque unleash the giant ape Grong on the Horde (after you’ve done quests to turn Grong into said giant ape)… but once the Horde defeats Grong, Bwomsamdi raises him as undead and the Alliance fight him in that form.

Shadowlands: I have to say, I’m one of those people who started out thinking the Kyrian were a weird semi-evil cult that erased your memories, and were then suffering the consequences in the form of a civil war with the Foresworn, who didn’t want to give up what they were. But over the course of the expansion I’ve really come around. The Kyrian are perhaps the only group this expansion that learned anything. With your help, the Archon realized that perhaps their adherence to a single, strict path was not helping them, and the Kyrian and Foresworn come together. It’s actually pretty rare that we go anywhere and make such positive change.

There are plenty of things I didn’t like here, particularly mechanically, but the Covenants and their unique aesthetics were standout. I’m a Kyrian for life… or maybe for death.

Dragonflight: It’s early days, but after playing plenty of beta the thing that still stands out to me is the expansion trailer. It’s not often that you can tell a whole story with a primary character who doesn’t say a word, and I held my breath as our Watcher friend fell to his death… and then shrieked with joy when Alexstraza swooped in to rescue him. What a brilliant moment, full of a type of happiness we haven’t had a lot of in game lately.

I look forward to see where we go next.

Q4tQ It’s launch day – what are you doing first? Do you level your main as quickly as possible, level an alt, level professions, quest, chain instances as soon as they’re unlocked, get dragon-riding then go glyph hunting? What is your way of approaching a new expansion?

It’s all about leveling my main so I can run dungeons and raids with my friends… though I may take breaks to build up rested XP and work on alts. I already plan to send alts of various armor types through Shadowlands Covenant chains for transmog in early Dragonflight. I haven’t bothered leveling up tons of alts, and didn’t try to get one of every armor class… but now I actually have a good mix of classes at 60 to collect that transmog, and I figure I’ll do it after Dragonflight launches and collect a little XP while I’m at it.

And from there? I guess I’ll see what I feel like when I get there.

And that is all for today my friends. I hope you enjoy the rest of the day and the weekend to come. Take a nap, play a game, level an alt — at least that’s what I plan to do.