The Queue: Return of the Nelf 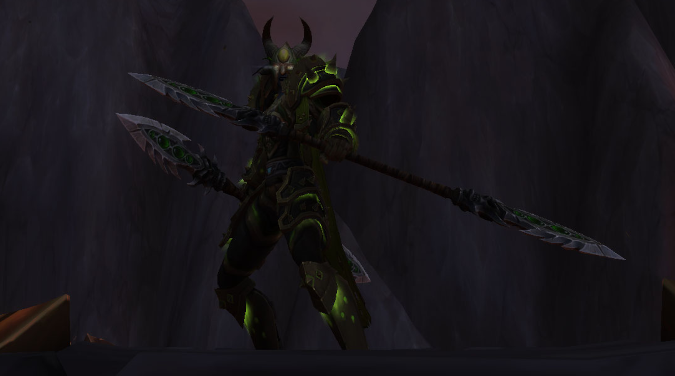 So yeah, Tuesday night was my return to raiding on my Night Elf Warrior, after my Lightforged took center stage for a good deal of the expansion so far. Why’d I switch back? No idea. I guess I missed how blissfully upset she can look at a moment’s notice.

QftQ: So the expansion and season is rolling, and I know some of us are dabbling in the Evoker class, but did anyone switched to it as their main? I myself like the devastation spec (I dont like to heal) , but I can’t find the justification while I would chose it over my mage, aside from being a dragon person. Frost mage has better survivability, better spell interactions for me at least. I hear good things about preservation though.
How about you?

I am not switching to Evoker, but there’s at least two in our raid I see on a regular basis so clearly someone has switched.

So, one of the big changes to the Vault this tier (unless it happened in SL-S3/4, since I didn’t play then) is that you can receive tier set pieces as loot options in the M+ section.

The M+ version of the tier drops are upgradable, which is also a nice touch, allowing you to keep your tier set on par with the rest of your M+ gear if you choose to go down that route for gearing, where the raid drop and vault section version of tier pieces are not upgradable.

My question is, how is the catalyst going to work this time around? If I convert a piece of M+ loot, is my new tier piece going to be the upgradable M+ version, or will it convert into the raid version, at the nearest relevant ilevel?

First off, I actually got the first of my tier on my Night Elf from the Vault, and it was from the Mythic+ because until this week I hadn’t done any bosses in the raid on her. Meanwhile all of my Draenei’s set pieces came from the raid. So I was pretty curious about this answer myself, although I also need to step up my Mythic+ game a bit and get a better rating if I want it to matter.

Regardless, while I haven’t tested it out yet, all of my reading on the subject says that once we have the Catalyst converting a piece of Mythic+ gear into Tier will follow the same formula, so they will also be upgradeable.

Best thing about the open world battling in Scarlet/Violet is that you can get stuff like the baby cub Teddiursa watching in the background as you fight and catch their mama Ursaring.

And then you can just leave them to fend for themselves :D

But wait a minute. How does Pokemon ecology even work? Pokemon come from eggs, right? Even the ghost ones? Like, does a Cofagrigus lay eggs that hatch into little Yamasks? Is that how Ursaring ended up with Teddiursa cubs? Can someone please explain to me why there are so many different Pokemon who are bears, but there’s no actual Bear type Pokemon? And has Bewear really accidentally killed its own trainers from time to time?

It just raises too many questions.

Q4tQ: How far behind am I if I haven’t even gotten to 60 yet, even though the expansion hasn’t been out that long? Am I screwed not being max level and max rep with everything? Between work, holidays, and illness, it’s been tough to dedicate time so far to WoW.

I switched from a character who has been running Vault of the Incarnates every week since it opened to a character who was wearing ilevel 343 blues that they crafted themselves like two weeks ago. You can absolutely catch up, if you’re of a mind to, and you don’t have to at all. I expect that there will be catch up mechanisms in patch 10.1 and 10.2, for example. I think you’re find going at whatever pace seems best to you.

Heck, you can always run Elemental Storms on your character as soon as you hit 70 and just kind of brute force your way to a bunch of ilevel 385 gear if you really want to.

That’s the Queue for Wednesday. I have to go get my eyes injected, so I expect tomorrow’s Queue to be very squinty.

Blizzard Watch is made possible by people like you.
Please consider supporting our Patreon!
Filed Under: Return Of The Nelf
Advertisement