The Queue: One unlucky duck 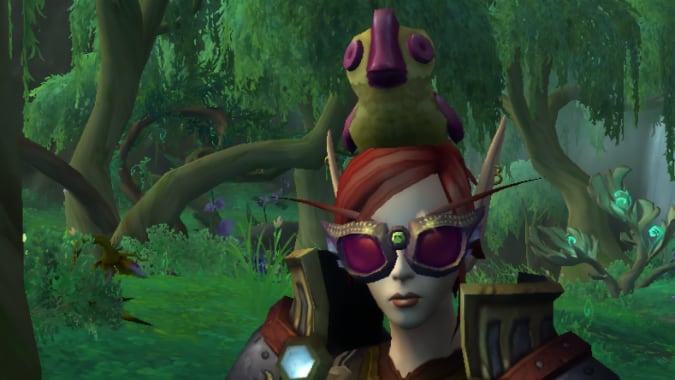 It’s been a delight to meet World of Warcraft’s very first ducks in Dragonflight. But once you meet a new creature in a video game, there’s a good chance you’re going to have to kill it, and perhaps then eat it, meaning maybe ducks aren’t so lucky after all.

Q4TLiz: What is the best way to cook duck? Asking for a friend!

The best way to cook duck is to not ducking cook duck.

Truly, we are the destroyers of all good things. Very shortly after we set foot on the Dragon Isles, we began to encounter ducks… including some ducks that we’ve taken care to rescue, including a much-loved duck plushy. We met the ducks of the Dragon Isles, ooh’d and aah’d appropriately over how cute they were, and immediately after that started to slaughter them wholesale to make feasts. Because most of the best feasts in Dragonflight include duck.

I think ducks are friends, not food, and this is making it a little problematic for raid night. My raid leader tells me to eat the feast. I ask if any ducks were harmed in the making of this feast.

… and actually that question is difficult to answer, because there are three different feast recipes that all make the same feast: the Grand Banquet of the Kalu’ak. One of these recipes, Gral’s Devotion, includes duck as a component. But once you craft it, it’s just a Grand Banquet of the Kalu’ak, like all the rest. There’s no way to confirm if it is or isn’t duck free.

And so I can’t eat any feasts. I can’t spend weeks tracking down baby ducks trapped in water bubbles to rescue and then turn around and gorge myself on roasted duck at raid time. So no more feasts. I have crafted a large quantity of Timely Demise for a nice haste buff, and I have a few fortune cookies.

I feel like I need an Alchemical Flavor Pocket on my gear so I can get by using less food, because until I can get confirmed duck-free feasts, I’m not eating them.

Q4tLiz: Why do my succulents always look so crummy? I have an aloe vera, a string of pearls, and a haworthia and they’re all completely fine as long as I literally never ever water them. My aloe is in a half/half perlite/cactus soil mix with a dash of playground sand, I bottom watered her for the first time since literally November… root rot. Help?

Sometimes you put them in just the right spot. You test the light with a light meter. You turn them this way and that. You check the humidity and make sure they aren’t near any vents or drafts. You ensure they’re planted in appropriate soil and feed them appropriate fertilizer on appropriate intervals. You water on a precise schedule, but also monitor them every day to see if they need anything.

And sometimes the plants hate it. They whither and die while the plant you forgot you left sitting in the shadow of the coffee table that you haven’t watered in a month is doing amazing.

I don’t have any secrets here. I have killed many plants, including succulents, and the only commonality I can find is that some of them are happy plants that grow no matter what… and some of them are not. If it ere my plant, I would make an attempt to do the opposite of what I’d ben doing. Maybe try just watering it from the top rather than the bottom, and then make sure it’s dry before you attempt to water again. All of my aloe get watered every 3-4 weeks. I don’t know if it’s a magic fix, but, it’s something to try. Once you’re covering all of the plant help basics, all you have left is doing your best to make these mercurial things happy.

Lore Question: In Vault we fight a Grimtotem. Where can I see the quests about the naissance of his rise to power? I was telling myself (this is a really prime [pun intended] time for them to come to power and I saw him!

This was well-answered in the Queue itself, but I feel like an awful lot of players here are confused by some of the story that happened when Raszageth escaped, and how she escaped… because that was on Kurog Grimtotem. You’ll find almost all we know about him by playing through the Forbidden Reach Dracthyr starting zone, and, really, it’s worth doing because it completely sets the stage for the story to come.

As to where Magatha is, all I know for certain is that we can’t kill Magatha Grimtotem in the first raid tier. It has to be at least the second or third before she shows up… and if Blizzard is to be trusted we’ll learn more about where the story is heading after we revisit the Forbidden Reach in patch 10.0.7 this spring. If nothing else, we should have a lot more to speculate on soon.

As someone currently trying to collect transoms for classes I never played during Legion, yes, please, let me skip this. Illidan likes to talk about how much he’s sacrificed, but does he have any idea how many times I’ve had to relive Ravencrest’s legacy and help Illidan kill a bunch of Moon Guard in a scenario that is still bizarrely difficult and buggy.

But I’m doing it all in the name of transmog. It is fine. The transmog is worth it.

And with that, I’m going to call the Queue complete. Everyone take care of yourself, enjoy your weekend, pet your dog, and don’t murder any ducks. Those are all the ingredients you need for a great weekend, so kick back, relax, and I’ll see you back here next week.