The Queue: This is actually fine 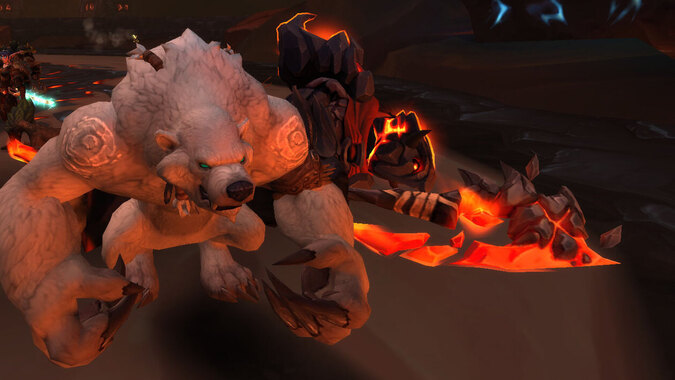 Hey, we did it! Then we did it again! My guild has taken its first slightly shaky steps into the Mythic Vault of the Incarnates. Managing to one-shot Mythic Eggnog right as we walked in, and then spending the rest of the night getting beat up by the Primal Council. Who are basically the same fight as they are on Heroic, but all of the usual everything hurts more does, y’know, hurt more. We had one really close wipe with two of the council dead, and the other two at 1-2% health left each, and then we spent the next forty minutes trying to recreate that for our kill.

But we did it! Now we’re 2/8 Mythic and the top guild on the server cluster! I’m not sure who our third target will be, likely Terros, but I’m already not looking forward to that one. Too many rocks.

While I work on sharpening my claws to cut through rock, it’s time for — The Queue!

Q4tQ: has anyone else created alts specifically to play on Tuesday and get their white armor sets for transmog? I have at least three.

Luckily, I have a character of every class already! I’m all set to collect a bunch of appearances that I’ll in all likelihood never use again…

Not that I don’t think they’re ok, but they’re just a little plain for my characters and I really feel like it’s doing myself a disservice since I’ve gone toe-to-toe with world-ending dragons and gods of the Twisting Nether.

I do like seeing my collection number go up though, it’s also time for another transmog collection achievement I think! Give us some fancy new set for having collected a bunch of options! Or a new transmog mount — as much as I love the Grand Expedition Yak it is a few expansions old at this point…

I don’t know if I’ve mentioned it before, but I have a WoW pal who is a mythic raider, and I go ask him stuff when I feel there’s an issue with my DPS or whatever the problem is. My very own WoW Coach!

He has suggested a dire and terrible thing. That after 18 years, I really need to start using keybinds instead of clicking. I see the sense of it, and it’s a change I’ve meant to make for ages – that doesn’t make it any easier.

Folks, this is gonna be rough.

I’ll let you in on a shameful secret. I also click on some of my abilities…

I only click on a few of them though, it’s about half and half. I keep the ones that I need to use the most on my 1-12, and between my natural finger length and using an MMO mouse with the 12 buttons on the side, I can avoid clicking on any of those. It’s just some of the less frequent things that I click on, and I’m so used to it that I don’t even notice anymore.

The only time I didn’t was back when I used to play a Holy Paladin. Then I had the whole lot of them bound to raid frame clicks with left and right mouse buttons modified by ctrl/alt/shift combos. Those were the days. I’m too tired to do that anymore, as long as I’m alive at the end of the fight nothing I’m playing needs that level of intensity.

What is something in dragonflight that you still haven’t gotten used to? For me it’s the fact I cannot skin dragons. Dragons being skinnable has just always been a thing in WoW. So the few times we get to kill a dragon I’ll mouse over it and then realize I cannot skin it

That bugs me so much! I know I’ve been able to do it before, why can’t I now! I get that some of these dragons are our friend, but if I can attack them and kill them, what’s a few missing scales on a dead body…

I’m also upset that I can’t skin Raszageth in the raid. You’re teleported away from the platform and you loot a treasure chest, not her, and I’m just standing there wistfully thinking of all of the leatherworking materials she must’ve been made of.

I think the thing I can’t get used to the most is the shared tags between Horde and Alliance. I still find myself shocked when the health bar doesn’t go grey when that Dwarf gets the first tap off on it.

XERIANNE GO AHEAD PLAY THE HERO THIS TIME

Q4tQ: How do I get the pretty purple lightning dragon skin for the renewed proto-drake mount? I see someone at the fishing lake everyday with it and I want it. Is it a raid or rare drop or something else?

It is a raid rare drop! It’s called Renewed Proto-Drake: Embodiment of the Storm-Eater and it is personal loot.

It’ll randomly be in the treasure chest after you defeat Razsageth. Amazingly it’s not limited to Mythic-only kills. As my guild has gotten a few out of our normal Raszageth kills and I’ve heard reports that it’s also showing up from LFR difficulty. I’ve also heard that you have a chance to get it from each difficulty in a week, so if you’re in a position to be killing multiple Razsageths between LFR/Normal/Heroic/Mythic and you really want to get that skin, you should take those opportunities!

Question for main pod: Which expansion capital city is the best at being a city, and which is overall your personal favorite? Stormwind/Org count for Cata, and sure Dalaran was used twice.

I feel like Boralus feels the most like a lived in city, but so little of the city is used. Dazar’alor weirdly gives me early Dragon Age 2 Kirkwall vibes. My favorite is probably Dalaran, even if that’s just nostalgia.

I think that Stormwind is the best at being a city. Valdrakken is close though, if it was scaled a little more for us and less for dragons I think it’d be the best. Orgrimmar still doesn’t feel like an actual place where people would live.

Dalaran is a really great city too. Even if the stupid Alliance side keeps kicking me out for wanting to explore it…

I miss Oribos though. It was nice and quick to get from thing to thing, and if it had an Auction House that non-engineers could use I would’ve never had to leave!

Have a great Monday everyone, I can’t believe that it’s almost not January anymore, feels like just yesterday that we were celebrating the New Year!