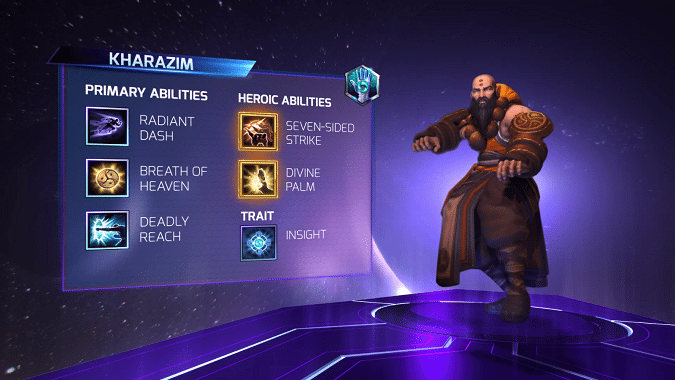 Heroes of the Storm: Kharazim guide

Kharazim is the first Diablo Support hero in Heroes of the Storm and is designed to be a hybrid, who can excel at either healing or damage depending on the trait you pick and the talents you choose. The essential points to remember for both builds are that you need to be hitting something as much as possible to get the most out of your Trait pick and always have one charge of Radiant Dash handy to get out of sticky situations. Picking up Kharazim? Check out our guide to Kharazim’s skins to get the right look.

Here’s a quick build guide for both Support and DPS roles if you need a fast reference while playing. A more detailed analysis of these builds can be found further below.

Kharazim is unique in that he is the only hero that can choose his Trait. Transcendence for healing over time, Iron Fists for extra damage, and Insight for extra mana regeneration over time — which also counts as his Level 1 Talent pick. I’ll go over these choices in more detail below.

Radiant Dash (Q): Jump to an ally or enemy. Enemies are immediately hit with a Basic Attack – 30 Mana

Great not only to close the gap with an enemy, but with two charges, it also gives a quick escape if you have a teammate nearby. This works through barriers, so use it (wisely) to jump an enemy that fled behind their turret or over a wall to grab a mercenary camp. Even better, hide in the brush near an objective and pop out with it to surprise an opponent. Also useful to get close to an ally that needs a heal from your Breath of Heaven ability or Transcendence trait.

This is your burst heal. It can potentially hit your whole team if you’re traveling a tight group. It gives you great sustain in lane and the movement buff, though small, may be the difference in running down a fleeing opponent or getting away from certain death for you and your team. The effect radius isn’t large, but you’ll get a sense of it with practice.

Deadly Reach (E): Your next Basic Attack increases your Attack Speed and Attack Range by 100% for 2 seconds. – 50 Mana

Your first thought may be the increased burst damage granted by this ability, but don’t forget the secondary benefit from your Trait proccing twice as fast. With Transcendence as your trait, using this ability will crank out increased healing. Combo with Radiant Dash to catch up with your enemy and Breath of Heaven for increased movement speed to keep up with them as they try to flee from your burst of damage, all the while healing yourself. This is where the Monk really shines. 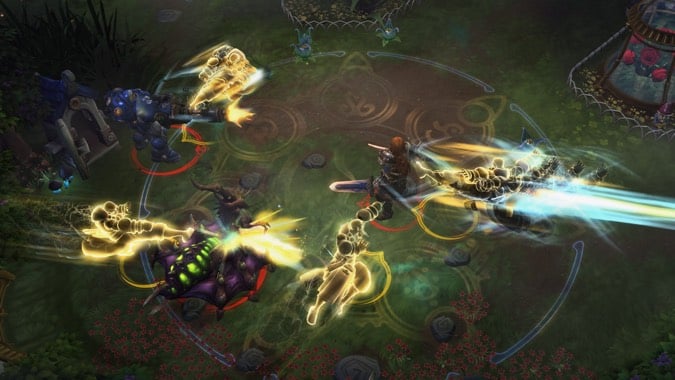 Before we drill down into the choices, I’m going to preface this with the caveat that you need to make Talent choices based on your team composition and your enemy composition. Facing Zeratul and Nova on the enemy team? Consider taking Clairvoyance at Level 7. Facing heavy crowd control from Muradin’s stuns and silences from Sylavanas’ Wailing Arrow? Take Relentless at Level 13. Adapting to the match is more important than following a cookie cutter build.

For the Support build, Transcendence provides a heal every third time you hit something. The heal will affect the nearby team member who needs it the most. Sometimes that means you get the heal, sometimes another teammate depending on who has lower health at the moment. Think of it as a smart heal over time with a small AE radius effect. If you are by yourself, you will always get the heal, of course, if you need it. Remember that this is not a burst heal. It’s more for sustain, but can be boosted with Deadly Reach if needed.

For the damage build, take Iron Firsts. This trait does extra damage on every third hit, and with its recent buff increasing its damage boost from 100% to 125%, the trait’s even better. You lose out on the automatic healing of Transcendence, but you still have your Breath of Heaven for personal healing. That ability may not be enough for you to solo mercenary camps until later in the game, so be careful. You’ll see some nice burst damage when this procs during Deadly Reach flurries.

While the Insight trait looks appealing (more mana! more ability usage!), it’s not worth the trade off of losing access to the other traits. If you want to try it out, try to keep it to matches vs the AI where you teammates aren’t so reliant on you for healing or damage. With its recent buff to mana generation — from 12 (+0.21 per level) to 14 (+0.36 per level) — it’s slightly more appealing, but we still can’t recommend it over Transcendence.

For support, Protective Shield gives you a targeted heal (of sorts) to help when things get hairy. Healing Ward looks appealing, but other players know to target and kill it immediately, so it rarely gets full use. For damage, Foresight’s utility may look useful but Overtake’s extended range is essential for running down fleeing enemies since you don’t have a slow or stun to keep them from getting away from you (even with Radiant Dash handy).

For support, Echo of Heaven is a no brainer. More healing can be a life saver (literally!). Just make sure to be aware of your positioning during the second burst to make sure your teammates are still in range. For damage builds, Way of the Hundred Fists is great burst damage when using Radiant Dash, especially when you can Dash twice in a row. 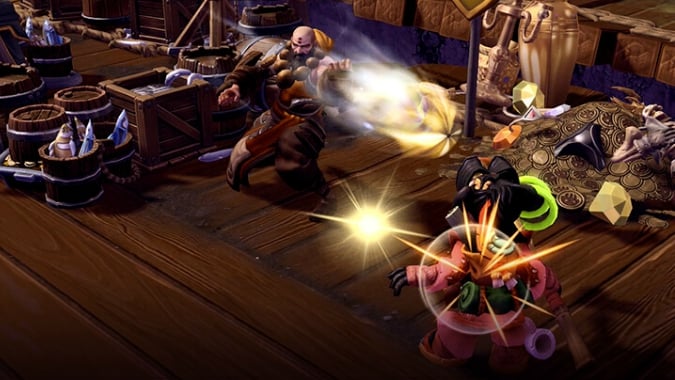 For support, Divine Palm will be your new crack. Landing this just in time to prevent lethal damage and grant your teammate (or yourself!) a very substantial heal means all your opponents efforts to focus down on your health has been nullified. Seriously, they should just call this Demoralizing Wave for what it does to the enemies’ morale. The trick, of course, is landing it just before death. That means misclicking will have tragic results and every time a teammate dies in your presence, you’re going to hear about it.

For damage, Seven-Sided Strike is quite the flashy AE damage ability. But because it targets the highest health enemy in the area, this ability is more about softening up a tightly packed enemy group than taking them down. It’s great for setting them up for Nova’s Precision Strike or after Johanna has pulled them into a tight circle, but don’t expect to be getting all the kills with this one. The exception is if the enemy team are already low health or if just one is caught in the area of effect. Also realize that it’s fairly easy to run out of the effect, too.

For both support and damage builds, Fists of Fury is an excellent choice. Longer duration of Deadly Reach means more procs of your trait which means either more healing or more damage. It’s win/win.

For support, Circle of Life gives even more healing. Enough said, unless your team is getting heavily silenced/slowed/rooted, then consider Soothing Breeze. For damage, Blazing Fists gets you more Deadly Reach which is always good.

For support, you’d think the Divine Palm upgrade Peaceful Repose would be a no-brainer, but you’ll get more use in team fights out of Storm Shield. For damage, again you might want to upgrade your Seven-Sided Strike to Transgression to do more damage, but Epiphany will give you the fuel for your other abilities to do much-needed burst damage. 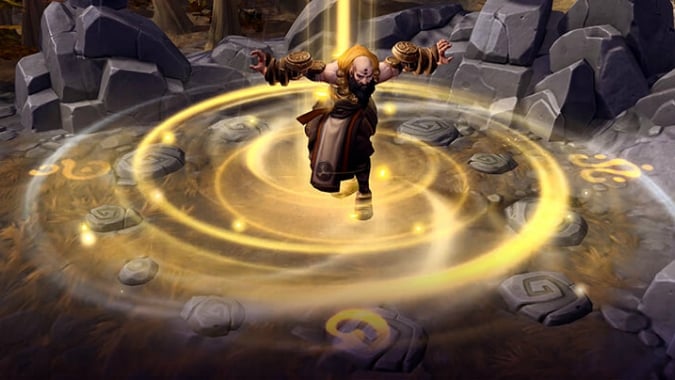 For support builds, remember that your W and Trait heals are fairly short range so stick with your group. You’ll do better with Warriors and melee-based Assassins since ranged Assassins may often be out of range of the heals that come from your Transcendence trait since you’ll have to be positioned in melee range they will be further away. Ranged Assassins will benefit from you using Radiant Dash to get next to them and Breath of Heaven for healing with the other Radiant Dash charge to get back into the fight or your Protective Shield. Try to avoid chasing enemies unless you have back up. While you have the tools with Radiant Dash and the movement speed buff from Breath of Heaven, you won’t have the DPS unless they are very low health or especially squishy. Also, you have no AE damage ability, so don’t rely on wave clearing minions (in lane, the Haunted Mines, etc), just focus hitting something for your trait proc.

For damage builds, remember you have no wave clear, so resign yourself to clearing minions slowly and being a lane bully with your self heal for sustain until you get high enough level to start soloing merc camps or initiate team fights. Remember you can follow fleeing enemies behind their walls with Radiant Dash, just make sure you have a nearby teammate to Dash back out to. Try to save your Seven-Sided Strike for when the enemy can’t run out of it (like when Leoric drops his Entomb, etc).