Lore and story as game mechanics in WoW 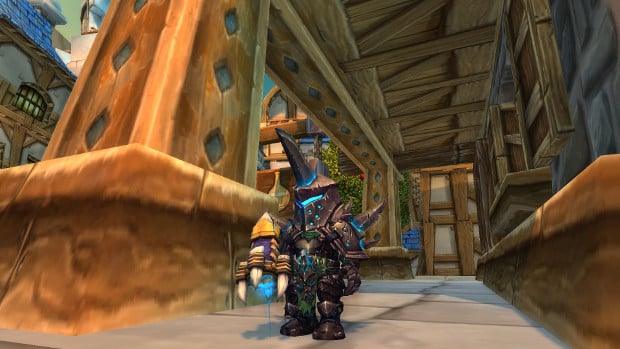 I’ve written about World of Warcraft and its lore for a very long time now. And one of the discussions that pops up from time to time is the idea that gameplay trumps lore. Why can’t humans talk to forsaken, when all forsaken have memories of being human? Gameplay trumps lore – allowing forsaken to speak to Alliance players caused too many problems in PvP. Why did the Alliance allow the Horde to continue to exist after the Siege of Orgrimmar without extracting heavy concessions? Because the story has to accommodate both factions – it may not make a lot of sense for the Alliance and Horde to come out of that moment coexisting, but the game has players on both sides who don’t want their faction dismantled.

The more I think about it, the more I don’t see that as a problem.

World of Warcraft is a game, and a very popular game. Over the course of its decade of existence, it’s accumulated so many story elements, hooks, digressions, it is a beast with many heads. But the primary purpose of the game is to be played, and the primary purpose of the story is to give the player something to do. Any story element, no matter how much it may seem to make sense, that cuts off play options isn’t an element that can be pursued. It’s not a question of gameplay trumping the lore – from the very first Warcraft RTS, the gameplay has always been the point of the lore.

It’s been this way for World of Warcraft as well. As an example – when the dungeon Blackrock Depths was launched, it was a very dwarf lore heavy dungeon, with a storyline involving Moira, daughter of Magni Bronzebeard and wife of Emperor Dagran Thaurissan. All very fine, but what do the Horde care about any of it? Short answer is, they don’t. Long answer is, Warchief Thrall handed you a quest telling you to care for incredibly vague diplomatic reasons that end up not amounting to anything. In this case, it’s not really important that Thrall is giving you a quest that you can in no way complete – indeed, it actually ends up illustrating his tenure as Warchief. Thrall expects the impossible. He gives you quests based on a worldview that is not accurate and which are doomed to failure because of that lack of understanding. It informs his character, and stands out as one of the big hints of how his reign as Warchief would go. Everything that follows in the game – his trip to Garadar and first meeting with Garrosh, his appointment of Garrosh as Warchief, his role during the Cataclysm expansion, his return to Orgrimmar and confrontation with Hellscream, and his battle in Nagrand on Draenor are all in line with this early quest. They progress from it.

In short, the base assumptions of the world, the metafictive concepts that hold the narrative in place are ones made to facilitate gameplay. That’s not a bad thing, because this is a game. It’s not a novel or comic book or movie. All those things have their own rules, and adaptation of this setting into those media can and should take that into account. But just as when one reads a comic book one is obliged to accept the panel-based art as a means to conveying story, in World of Warcraft and other MMO’s it is through gameplay that story is conveyed. Quests, dungeons, raids, zone objectives, leveling scenarios – all of these are not merely places to push buttons. In essence, the gameplay in WoW is what we do to get the story as much as we turn pages in a book, and far more active than sitting in a dark movie theatre or on your couch watching a film. Games, especially massively multiplayer games, have many tools to tell the story. More interestingly for games like WoW, other players are part of the means of production for story. (Yes, it’s a Marx reference. I’m weird.)

What I mean by this is simple – in order to get the full story out of World of Warcraft, it’s necessary to play with other people. It is, in a way, a collaborative effort. Imagine that in order to get at the full story of the Lord of the Rings trilogy you had to cooperate with several other people to turn the pages, performing various tasks as you went? It may mean that the story by necessity has to take certain paths and make certain decisions – painting with broad strokes, as it were – but it also means you have to be far more active and engaged to get there. It changes the assumptions of how story is presented. The two interlock.

By necessity, the story of the Warcraft setting will always take these kinds of decisions into account. It is a story that wants to be told without invalidating the choices of others – Horde vs. Alliance, PvE vs. PvP, raiding vs. non. Sometimes we may grow frustrated that it chooses what we’d consider the safer options, but we have to remember that the jug you carry the water in changes its shape. The means to get at the story is a part of how that story ends up being told, for good or ill.

Blizzard Watch is made possible by people like you.
Please consider supporting our Patreon!
Filed Under: Game-lore, Lore, Wow-lore
Advertisement