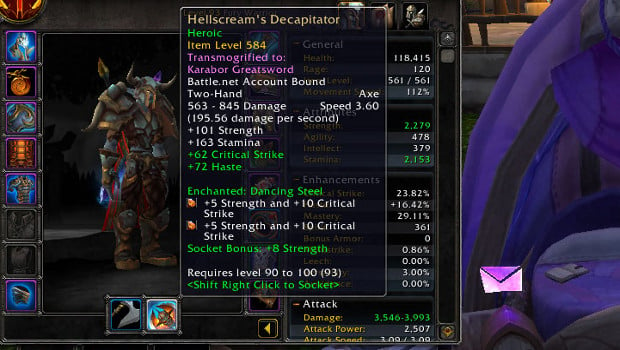 If you’re excited about how heirlooms are going to work in patch 6.1, one question may have remained: just how are the various 90 to 100 heirloom weapons we received for defeating Garrosh Hellscream before Warlords of Draenor going to work with the new system? Well, now we know.

@Fetzie_ Only the most prestigious version of each Garrosh heirloom that you own will show up in your Heirlooms collection.

So, as the question above poses, if you have all three versions of a Garrosh Hellscream heirloom, only the best version (the Mythic) would appear in your heirloom tab interface, but since all of your characters can access it. you can equip it across multiple characters at one time. This should also mean if you’ve been using (as an example) the heroic and normal to dual wield, you’ll now be able to dual wield two heroic.

Since I’m currently using the heirloom on two characters, it’ll simplify leveling my horde of warrior and death knight alts, so I’m all for it.

Blizzard Watch is made possible by people like you.
Please consider supporting our Patreon!
Filed Under: Garrosh-Heirlooms, Garrosh-Hellscream, Heirloom, Heirloom-tab
Advertisement