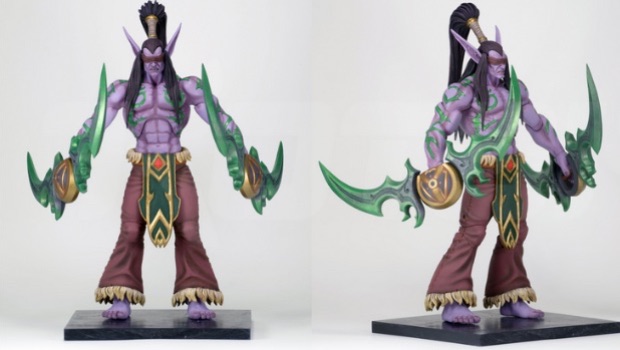 As with all things Blizzard, we don’t have a release date, but we do know that NECA is going to be rolling out a line of Heroes of the Storm action figures, reports Kotaku from Toy Fair. Though Blizzard seems like a natural fit for toys, they’ve been lacking: sure, there are the amazingly-detailed (and amazingly expensive) Slideshow Collectables statues and fun-and-funny Funko Pop! figures, we’ve been missing a middle ground.

Though NECA intends to make action figures for all of the Heroes characters, there will only be 5 to start with — Arthas, Illidan, Stitches, Nova, and Tyrael — which offer a good range of options for fans of many Blizzard games. Illidan and Nova will be the first figures released, coming out this July, with Tyrael and Arthas to follow at a later date, and deluxe figure Stitch will be the last of this batch to be released. The figures are 7-inch scale and will be fully painted (any images you see of gray or brown figures are unpainted resin prototypes). Expect the figures to retail for around $15 to $20 and be available at Toys R Us, Hastings, local retailers, and potentially more.

Update: We’ve updated this post to include additional info about pricing, availability, and size of the figures after speaking with NECA.

Blizzard Watch is made possible by people like you.
Please consider supporting our Patreon!
Filed Under: Action Figures, Heroes Of The Storm Toys, Neca, Toys
Advertisement