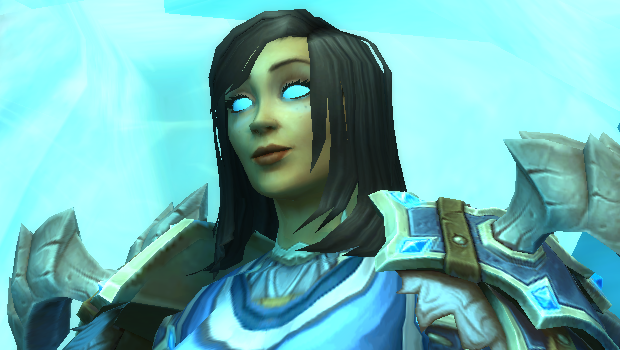 What better way to begin what I hope is a fruitful and lengthy tenure writing about death knights than by jumping straight into the nitty gritty of what the future seems to hold for us?

No? Well alright, I suppose a brief introduction and foray into nostalgia is in order.

I’m Magdalena, and I’ve been playing a death knight since the inception of the class in Wrath of the Lich King. Although I’d been introduced to World of Warcraft in its vanilla days, I began playing seriously in late Burning Crusade (specifically, when Wrath of the Lich King had already been announced) with the express purpose of getting a class- any class– to level 55 so that I would be ready for the unveiling of the death knight. The rest, as they say, is history: my death knight has been, continues to be and likely will remain my main class played in this game.

If my name seems familiar in the WoW-sphere, then it’s probably because of several reasons. You could be familiar with the #Acherus Death Knight community that I proudly lead, nearly four years since its founding. You might also be familiar with my two blogs, one of which is death knight related, while the other strays into wider topics within the gaming world. On the other hand, it could simply be because you’ve heard second-hand accounts about a deranged individual who spends far too much time overanalyzing the minutiae of this game and generally spamming everyone on his twitter feed! Regardless, I’m very pleased to be here.

I’ve had the honor of being able to count many of the Blizzard Watch crew as my friends for some time, but this marks my first venture in joining their ranks. Although I thoroughly enjoy blogging, writing and analyzing (read: ranting about) the state of death knights over the ages, I have an admittedly lazy streak which is shamefully obvious in the neglected state of my independent blogs. Being part of the Blizzard Watch team however, means a new source of motivation, inspiration and (I hope) education for both myself and for the community that supports us.

Thus far, I’ve being deliberately vague about the relative structure and format of this column because, aside from its obvious class-specific nature, there are really no limits on what I might choose to write about here. With two roles, three specializations and an incredibly complex history (both lore and game-wise) behind them, death knights are a class that can inspire a plethora of subjects for discussion. You can be sure that I’ll be just as likely to discuss eras long-past as I will potential changes for the future. I’m also quite receptive to requests for specific topics, as well as occasional Q&A columns (keep them short please!) depending on the type of reaction I get from all of you.

And now, back to our regularly scheduled program

What, did you think I’d simply leave all of you hanging with a brief introduction as the first entry of Plaguebringer? Of course not!

Patch 6.1 is on the horizon and death knights are slated to receive their own share of changes along with other classes. Before I cover these changes, let’s get one thing clear: This patch is largely about numbers. With very few exceptions, almost every change made to classes this patch aims to balance talents and/or specs within a particular class closer to its counterparts. There’s certainly a conversation to be had about the brutal slew of hotfixes that came in prior to this patch (*cough* Blood Boil nerf *cough*), but let’s save that for another time. Without further ado, here’s what death knights can expect in the coming patch:

Necrotic Plague damage has been buffed by 20%

The more things change, the more they stay the same. No really, that’s not an exaggeration: the Necrotic Plague buff is certainly welcome for Unholy death knights currently engaged in the Necroticblight Playstyle, which involves rolling 15-stacks of the DoT for as long as possible before quickly restacking it on targets by using Unholy Blight. Indeed, given that Necroticblight is already a viable playstyle (and currently seeing use on multiple Blackrock Foundry encounters), one might wonder if a buff is necessarily in our interest- a buff this potent could very well edge out instances where Defile or Breath of Sindragosa might be worth taking for an Unholy Death Knight. We shall have to wait and see.

But what about Blood and Frost? Won’t this Necrotic Plague buff be of interest to them? The answer, in short, is: not nearly as much.

Blood is the easier spec to tackle here: the damage buff simply isn’t enough to make Necrotic Plague break even with its alternatives. Even the original 37% buff wasn’t enough to dissuade Blood from taking Defile or Breath of Sindragosa over Necrotic Plague for damage-dealing purposes. There’s a much longer conversation to be had here about the mitigative benefits of each Level 100 talent for Blood DKs, but we’ll save that for another day. For now, damage wise, Necrotic Plague remains strictly inferior to its counterparts in any event where the two will see use.

As for Frost, simulations show that the Necrotic Plague buff brings the talent fairly close to Defile for Frost death knights. Indeed, given that the sim assumes near perfect Defile uptime (i.e. all ticks get off, cast off cooldown), it’s likely that Necrotic Plague might prove to be a very popular option among Frost DKs. Why then, am I not enthused? Primarily because in matters of PvE, Frost currently remains in Unholy’s shadow (no pun intended). After fairly vigorous representation in multiple aspects of Highmaul raiding — thus diminishing the notion that this is simply the result of sampling bias — the numbers speak for themselves: The general population of Frost Death Knights just aren’t putting out the kind of numbers that their Unholy counterparts currently are. I don’t mean to imply that Frost DKs aren’t seeing raid time. Quite the opposite, in fact. However, the fact that Unholy is performing so well not only as a Death Knight spec but as an overall DPS spec, will likely see it in high demand for the foreseeable future. Thus, Necrotic Plague buff or not, things don’t change a whole lot for Frost.

Breath of Sindragosa has had its initial cost removed

Ah, now we get to the good stuff!

Breath of Sindragosa has been a pretty unsung talent, in my opinion. It obviously doesn’t play very well with Killing Machine and Frost (especially DW Frost), but that’s merely a subset of a much greater issue that Frost has with the mechanic. For Unholy and Blood though, Breath of Sindragosa has proven to be an incredibly powerful talent in the right hands.

To begin with, I want to address two popular misconceptions: firstly, the belief that Breath of Sindragosa does not interact with our Level 60 (Rune Regeneration) talents, and secondly, the belief that it doesn’t interact with Shadow of Death (Blood) or stack Shadow Infusion (Unholy). Both of these are fallacies. The talent does in fact proc Rune Regeneration (and has since Day One of the Warlords of Draenor Alpha), and it also interacts with the aforementioned spec-specific mechanics as well.

Currently, Breath is becoming an increasingly popular choice for Unholy DKs on fights that involve consistent target uptime, as well as reliable magic damage soaking — both Oregorger and Gruul in Blackrock Foundry stand as strong examples here. It requires a great deal more skill to utilize properly compared to its counterparts, but the results are undeniable. Just check out the kind of damage that Lamperouqe was able to attain with Breath on his Mythic Gruul kill.

Blood death knights, on the other hand, have found an even more lucrative (read: borderline overpowered) use for this talent. By taking advantage of the ability of autoattack Multistrikes to generate extra Runic Power for Blood, as well as a opportune uses of Empower Rune Weapon, AMS soaking and even Glyph of Icy Runes, Blood Death Knights are able to prolong the duration of Breath of Sindragosa to absurd lengths. Now, I want to be clear: this uptime is the result of ridiculously good RNG, combined with a massive hit to survivability since the Blood DK in question sacrifices a huge number of Death Strikes in order to generate Runic Power, and also forgoes Death Strike timing completely. The end results are still undeniable, though. There’s also a greater conversation to be had here about the role that Multistrike plays for Blood, but we’ll leave that for another day.

So where does the removal of the additional cost fit into all of this? It essentially grants us one extra tick of Breath each time we cast it. That isn’t a huge change in and of itself, but given that the community has already begun to warm up to the talent, I wouldn’t be surprised to see it suddenly become a lot more popular following the patch.

This is a fairly boring, but necessary buff. Death Siphon was simply undertuned for the amount of healing that it granted. Given that it’s a direct DPS loss for Unholy and Frost death knights, the talent should grant healing that is more comparable to that of Death Pact. Unfortunately, this buff doesn’t change its lack of appeal to Blood death knights — the fact that they need to sacrifice Death Runes (and thus, Death Strikes) for the talent simply make it a non-option in most cases.

There are a number of other undocumented changes that I’d like to discuss, but this column is already excessively lengthy.