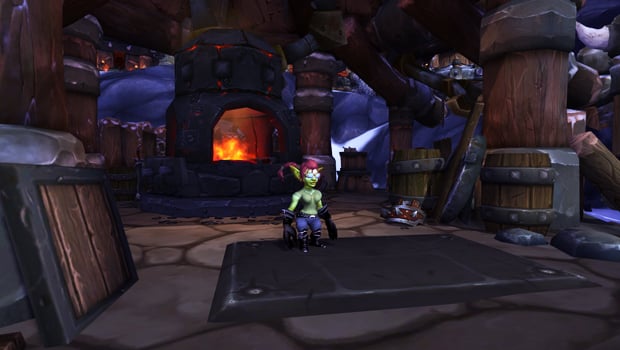 In the grand scheme of things, I hadn’t really given a lot of thought to garrison planning — I knew I wanted both a jewelcrafting and engineering building for my professions, I wanted an inn because it looked cool (and the quests sounded like fun), but beyond that, it was up in the air. The last building I ever thought I’d find myself inadvertently falling in love with, however, was the Salvage Yard. It didn’t sound very exciting at the outset — maybe you’ll get some transmog gear, maybe once in a blue moon you’ll get a gear upgrade, but it doesn’t make word orders, so … what’s the point of having it around?

I cannot emphasize this enough: gold. Not only have I been quietly raking in gear upgrades for my followers hand over fist (and I’m poised to bump 10-15 of them up to ilvl 660 the second 6.1 goes live), I’ve been rolling around in green items like you wouldn’t believe. Some of them vendor for a nice chunk of change, but some of them — a lot of them, actually — sell on the AH for ridiculous amounts of gold. We’re talking 2.5k for a Buccaneer’s Vest of the Who Cares, I’m Rich. I look forward to my followers returning from missions not for the items and resources they bring me, but for all those wonderful little boxes of would-be treasures that sell for ridiculous amounts of gold to people who are just as fanatical about transmog as I am. It’s like Christmas every day.

I will never get rid of this building. Ever. Unless they suddenly make it stop producing green items altogether, which would be silly as that seems to be the purpose of the building. It doesn’t need anything else, no work orders, nothing but allowing me to open those shiny boxes of happiness on a semi-regular basis. Do you guys have a building you’ve fallen in love with? Is there one structure in your garrison you absolutely cannot do without? What’s your favorite garrison building?