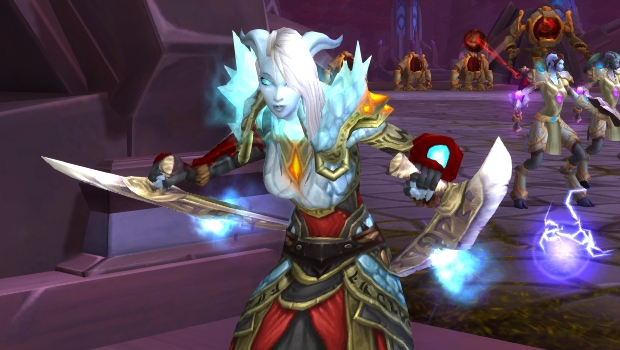 I like Enhancement a whole lot, as you probably noticed from the fact that my first column about the spec was filled with enthusiastic gushing.  After a decade of play and a stunning number of shifts in design philosophy, it remains one of my absolute favorite parts of the game.  The fact that I can then combine that with one of my other favorite parts of the game, draenei, is like icing on pie.

That doesn’t mean that the spec doesn’t have some pretty big issues, and they’re obvious to anyone who’s paying attention to how Enhancement plays.  It’s obvious to me, and my days of serious progression raiding are long past.  And while I’d like to talk about the changes brought to the spec with 6.1, well, there’s not much on that front; Echo of the Elements is being changed in a meaningful way, but for the most part the spec’s three biggest issues remain unchanged.

Yes, the Enhancement problems come down to three basic issues: too much emphasis on area damage, not enough meaningful and impactful cooldowns, and too many buttons to rotate through normally.  As cool as the spec is, we wind up feeling unwieldy and tuned for a role we didn’t really ask for.

On the one hand, being good at something seems like it should be a flat-out good thing.  But as Mages the world over discovered for several expansions, being good at AoE comes at the cost of your single-target damage, and single-target damage is always going to matter more.  Boss fights are single-target affairs, and while being able to spread around lots of damage during trash fights makes them go a little bit fast, that’s not the difference between a clear and a wipe.

From an absolutely objective standpoint, it makes sense that you should only get one or the other.  If your spec or class is great at wiping out huge groups, it should suffer on single-target fights.  The problem is that as much logical sense as that makes, there has never been a time when that superiority at AoE damage has actually translated to greater efficiency on any content that matters.  All it means is that we’re really great at wiping out large groups of enemies that could be wiped out with equal ease and slightly less speed just by burning one down after the other.

All the damage that Enhancement can pump out is keenly tied to spreading Flame Shock, busting out Fire Nova, and otherwise spreading out for big numbers.  On single targets, we’re just not as good.  Which is not to our credit or our benefit, especially as it feels very much akin to the old spellpower main-hand weapons we’d swing around back in the day: a design element we fell into rather than one we were given intentionally. 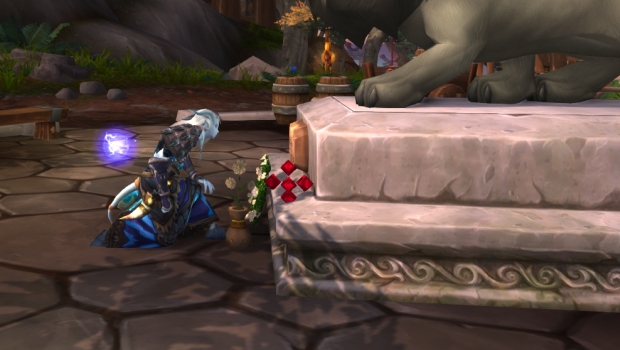 A lot of the Enhancement playstyle is based entirely around managing a complex interplay of random events, which leads to a sense that the spec is sort of frantic.  We have way too much random chance going on, which is why I’m entirely in favor of the change to Echo of the Elements.  Instead of randomly getting strings of free Stormstrikes over and over, I can actually manage my use of three core abilities based on having multiple charges!  Intelligent choices instead of hammering on buttons as fast as they light up like the most demented version of Whack-A-Mole possible.

The flip side to Enhancement’s huge number of buttons that need to be juggled for play, though, is that we don’t have any cooldowns that feel meaty and distinct to the spec.  Feral Spirits is there, but it doesn’t actually affect our individual damage, it just provides another damage source that we’re technically responsible for.  None of our totems provide any sort of meaningful DPS effect outside of our old stalwart Searing Totem; Fire Elemental/Storm Elemental are solid DPS boosts, but much like Feral Spirits it doesn’t really feel like something under our direct control even with Primal Elementalist.

No, the big events for Enhancement are based entirely around random procs, chiefly Maelstrom Weapon (although Improved Flame Shock adds in another element), or around passive effects that stack up over time.  The net result is that since so few of our cooldowns other than Heroism have a direct and meaningful impact on our personal damage, they just get rolled out as they come up instead of being held back for anything.  It reduces the aspect of making interesting choices.

The other side of the problem that the previous point leads to is that playing Enhancement is just plain cumbersome.  Instead of having meaningful cooldowns to use when we really need to burn something to the ground, we have a whole lot of abilities to constantly flit between over and over.  The redesigned Flurry just contributes to that feel, making our cooldowns shorter, our attacks faster, and our various individual sources of damage almost entirely invisible.

As much as I like the breadth of the Enhancement toolkit, the fact that we run around with a bloated rotation that has far too many moving parts is not a part of that.  Our lack of meaningful cooldowns ties into the same issue.  Tightening up the sheer breadth of abilities we use for damage would go a long way toward making the class feel less frantic, but it also would mean pruning some of the hybrid nature of the class — you know, one of the elements that I very specifically praised last week.

Blizzard has acknowledged that Shaman sort of has too many damage sources and too much stuff on short cooldowns without meaningful impact.  There’s no real choice about when to use Unleash Elements or such; it’s “throw out as soon as you can” for pretty much everything.  What’s problematic is that we’re left with so many abilities to rotate around, applying Flame Shock and then tossing Frost Shocks, firing Lightning Bolt as soon as we can, using up our melee strikes… it’s functional, but it’s sure as hell not as elegant as many other rotations. 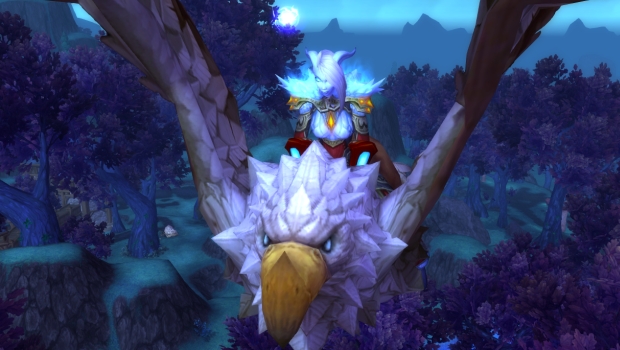 So what could be done?

Oddly, I feel like all of these issues funnel into the exact same location insofar as all three come down to having too many buttons that do too little and reduce intelligent choice.  By spamming out Flame Shock, Lava Lash, and Fire Nova, we wind up making for a very effective AoE class that can’t do as much single-target damage… and there are some obvious fixes right there that would allow for intelligent decisions about when to AoE vs. when to do single-target damage, which would greatly improve our overall utility.

It’s ironic that more wasn’t done about the issue going into the expansion, since one of the big changes made in Warlords was ostensibly to reduce button bloat.  Instead, Enhancement remained more or less exactly where it was already, when trimming down button bloat would actually do a lot to make the class balance better and feel more fun to play.  We also suffer from the hybrid issue mentioned in my first column – since so many of the crucial abilities for Enhancement show up for other specs, re-tuning the abilities we have affects other specs as well.

How could we trim, in a quick-and-dirty fashion?  I think we could probably put Lava Lash and Stormstrike onto the same cooldown a la Crusader Strike/Hammer of the Righteous; let Stormstrike refresh the duration on the Flame Shock debuff so that you effectively create two separate modes for Enhancement’s melee abilities.  Buff the damage slightly, but don’t let Enhancement juggle the two constantly.  Our Unleash could also use tweaks to de-emphasize Fire Nova – we’re wielding a lot of different sorts of spell damage, having our next fire spell and only that be enhanced gives us the choice between two spells and one of them only occasionally must be re-applied.

These are, I must note, mostly back-of-the-envelope knee-jerk possibilities.  I can see an argument being made for preserving the rapid feel of Enhancement, even as I think it loses some of the impact of back in the day.  Enhancement has always been about flurries of blows and sudden crescendos of damage, but our current state of design is a bit far from the glory days of watching Windfury suddenly go off in a sudden and unexpected burst of damage.

Despite the issues that Enhancement does have right now, I honestly don’t feel like the spec is all that bad.  Were I pushing hard on Mythic raiding, I might feel differently, but I’m also of the mind that pushing forward on Mythic raiding or the equivalent is always going to come down to whatever’s in the top 10%.  The rest of the time, you make do with what you have.

I don’t want to pretend that there are no issues with the class, because there most certainly are.  I largely agree with the assessment that Blizzard doesn’t know what to do with the spec, precisely, because it feels like the changes being made are a bit too timid, and we’ve gotten more buttons to hit but fewer meaningful choices despite that.  I want more of my little totem forts back, more group utility in exchange for already not hitting the top of single-target damage, and less reliance on luck.

But hey, Enhancement has always been an odd spec, from its first incarnation as sort of maybe possibly an off tank to its current state.  Play it for long enough and you come to expect that it’ll be weird; that’s part of the fun.

It’s the price you pay for still being the coolest shaman spec around, I suppose.