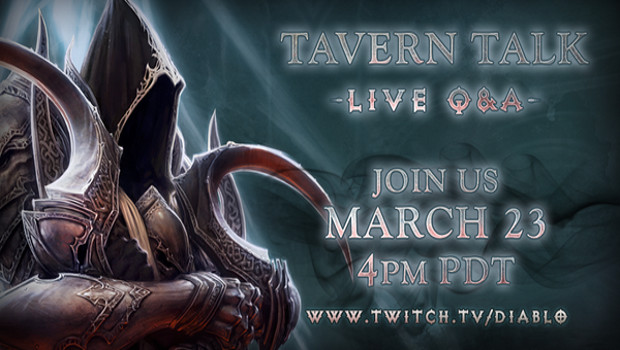 For the Diablo III players among us, some news – this Monday, March 23rd, there will be a live question and answer with several of the developers on Diablo III, talking about the next patch and season for the game. The chat will take place on Twitch.tv, and unlike previous such Tavern Talks there won’t be any prepping questions – consider this a chance for your comment gunslingers to get your queries out fast via the twitch chat room.

Originally Posted by Nevalistis (Official Post)
As the 2.2.0 PTR comes to a close, we know you’ve probably got plenty of questions about what the next patch and season have to offer.

Well, good news everyone! To answer your questions and more, we’ll be hosting a live Q&A next week on Twitch!

The four of us will be hanging out in the Blizzard Studio for a full hour, taking your questions LIVE from Twitch chat and digging into the design, iteration, and implementation of our upcoming patch and season.

Unlike previous Tavern Talks, we won’t be pulling any questions in advance, so be sure to have yours ready to go when the show begins!

As always, we’ll have the VOD of the full Q&A available on both our Twitch and YouTube channels shortly after the stream concludes, so don’t sweat it if you can’t make it to the live show. That said, we hope to see you there!