The Queue: Adding insult to injury 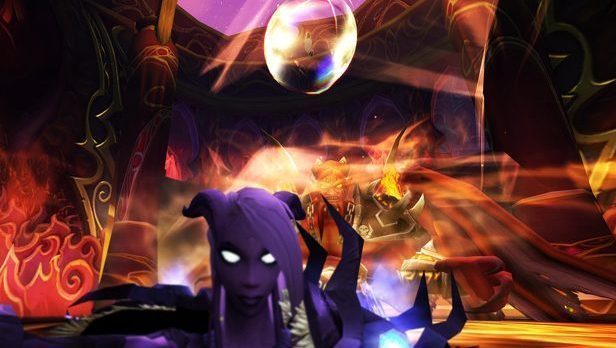 You know, I’m guessing all those old raid bosses are already mad enough, seeing as how we can merrily tromp into their former fortresses and defeat them in a matter of seconds. But I’m pretty sure nothing is more downright humiliating as when a would-be hero takes a moment to stop, reflect, and snap a selfie before going on a stomping spree and nabbing all the loot.

I think I need to get selfies with all the raid bosses, now. Just for my own personal collection. Hm, who to tackle next? While I ponder that, let’s answer some questions.

I thought that with the last wing of BRF open on the LFR that Elemental Runes would be raining on us. It seems that they timed it perfectly in the past so I’m a bit surprised. Do you think this is “working as intended”?

I usually get at least 9 per boss, but Blackhand gave me 27 last week, and if it works like Highmaul, he’s a guaranteed 27 every week. In addition, each boss in Blackrock has a chance to drop 27 Elemental Runes as well. It’s not a cache you open, they just magically appear in your bags, so it’s easy to miss when it happens.

QftQ: When I logged in today, I noticed a yellow mark above a character sitting just outside my garrison. When I hovered my mouse over the exclamation point is said it was for “Emote Bunny”.

However, when I was in the area the yellow mark was showing, and my garrison finished loading, the exclamation point was gone and there wasn’t any character there.

Anyone know what this emote bunny is suppose to be?

The Emote Bunny is a rare level 23 battle pet designed along the same lines as the Elekk Plushie, in that it has no real attacks or counters. Instead, its abilities consists solely of a series of complex emotes, made far more complicated due to the fact that rabbit models in WoW don’t really have much in the way of wee little appendages suitable for waving. This fact is reflected in its level 20 ability, Flappy Arms, which includes the descriptor “Bunny has no arms. Bunny is sad.”

… no really though, a “bunny” is term used for any number of invisible game triggers set up to begin a certain event or action in the game world. Usually they are completely invisible, but it sounds like you’re able to witness one of these creatures loading. As to why it has an exclamation point, it’s probably a hidden quest that randomly pops up outside your garrison, either due to an invasion, or an arrival at your garrison/garrison chain quest, or even something like the appearance of the mole machine outside your garrison. It’s nothing to worry about, it’s something you simply weren’t supposed to see at all — you just happened to catch a glimpse in the midst of everything loading up.

QftQ: Should I leave my guild if I play at different times they do, unable to raid when they do, and feel generally disconnected from it? I joined at level 30 after running a few dungeons with the GM’s lowbie alt, and haven’t ever sought out another guild. I barely knew what I wanted from a guild at the time, and my schedule has changed a lot since then. How would I even go about finding a new guild? And leaving my old one?

There is only one question I ask myself when I’m thinking about whether or not I should leave a guild: “Am I having fun right now?” Because the thing is, you’re paying to play this game, and the game should be giving you fun as a result. If it’s not doing that, then what are you paying for exactly? If you’re by and large disconnected from your guild, haven’t made any real connections with people and don’t fit the schedule they run with, then maybe it’s time to find someplace new.

If you’re familiar with your current guild’s GM, simply explain the situation to them — that you’d like to raid and participate, but your schedule simply doesn’t match up to what they have in the guild anymore, so you’re going to see if you can find something that works for you. Usually when I’m looking for raiding guilds, I’ll go poking around WoWProgress and look up my server to see what guilds are raiding, what their schedules are like, how far along they are in progression, and whether or not they’re recruiting.

That’s the other thing you have to think about when you’re looking for a new guild — how well geared are you? How well do you know the different raid fights? How many days a week are you prepared to raid? Your gear and your familiarity with raid zones will kind of dictate what you want to shoot for. If you’re just starting out, look for a more casual guild that maybe isn’t quite as progressed. If you’ve done high end raiding before, maybe look for something a little more solid. Good luck, whatever you happen to decide!

Q4TQ: What do you think the chances are of, at this point in the game’s lifecycle, seeing the addition of another primary profession to the game? The last we saw was the introduction of Inscription back during WoTLK (and Cata brought everyone’s -favorite- secondary profession, Archaeology.)

Do you think Blizzard will ever add another primary profession to the game? If so, any thoughts on what they could add?

I think the only way they’ll add another profession is if they come up with something that makes sense and will continue to be useful once the expansion is over. Along those lines, I think they’d be smart to take a look at Wildstar, throw in player housing and make woodworking a profession that creates staves, polearms, and furniture for said player housing.

Why does Blizzard have Companion Pets and Battle Pets in the AH?  What makes them different? Please tell me as it keeps me awake at night trying to understand!

Companion Pets are BoE pets that have not been learned. Battle Pets are pets that have been learned, possibly leveled a bit, and caged to sell on the AH. If you’re looking for a pet that has already been leveled to 25, you’re going to find it in the Battle Pet section. Keep in mind that some pets cannot be caged, and some pets cannot be used for battling — those are the kinds of pets you’ll see in the Companion Pets tab, along with pets that just haven’t been learned.

He’s not the only one on staff that knows how to sling a blade.

That’s it for Saturday’s Queue — be sure to leave plenty of questions for Sunday!