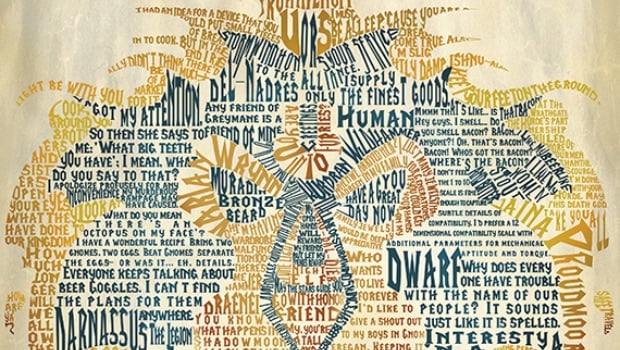 World of Warcraft has gotten so big that it’s tough to capture the feel of the game in any single piece of artwork — though Blizzard’s concept art, box art, and poster art can capture a specific part of the game, it’s hard to get everything. So just how do you capture all of the glory of World of Warcraft in a single image? We think if you tried to accomplish this admittedly tall order, you’d wind up with something very much like Scott Smith’s typographical Alliance and Horde posters, which he sells in his Etsy Store, SkahfeeStudios, alongside similar pieces inspired by movies and TV.

Each poster is made up of numerous quotes from members of each faction, arranged and colored to make a faction logo out of the text. From picking just the right quotes to laying out the text one letter at a time, making these posters was a time consuming process — but we think the results are worth it.

We caught up with Scott to see just how he brought the Alliance and Horde insignias to life.

Blizzard Watch: I’m making the guess that you play WoW or Warcraft: what do you play?

Scott: Yes! I played Warcraft since the original Orcs & Humans came out in 1994. I also put a lot of hours into WoW although I haven’t played in some time. My main was an Undead Mage.

How did you get started making word art?

I got my start on my typography work as a personal project. I wanted art for my home that wasn’t just mass-produced movie posters, and so I made it myself. I’d always loved movie quotes so I knew I wanted that to be the main focus. My first pieces were very simple; just quotes laid out in cool geometric patterns rather than forming an image. Since then I’ve challenged myself to make every piece more intricate and interesting.

You have a lot of movie art, but I’m not seeing much gaming art — why Warcraft?

You’re right, I don’t really have any other gaming art. Games are so much harder to work with for these typography pieces. Either the game property is iconic but it doesn’t have a lot of iconic dialogue (Mario, Metroid, Zelda) or there is a ton of great dialogue but it’s spread out across 20, 40, or even 100+ hours of gameplay for multiple game series (Grand Theft Auto, Dragon Age, Mass Effect, Bioshock). And if you dig into those, there’s no way to rewind a line you missed and sometimes not even a way to pause to frantically transcribe.

WoW on the other hand has all of this repeating flavor text that is just perfect. It’s so much easier to source it but it’s still such an important part of the game experience (at least to me). My WoW pieces are full of tons of great NPC and PC emotes that instantly make me remember the experience of playing. 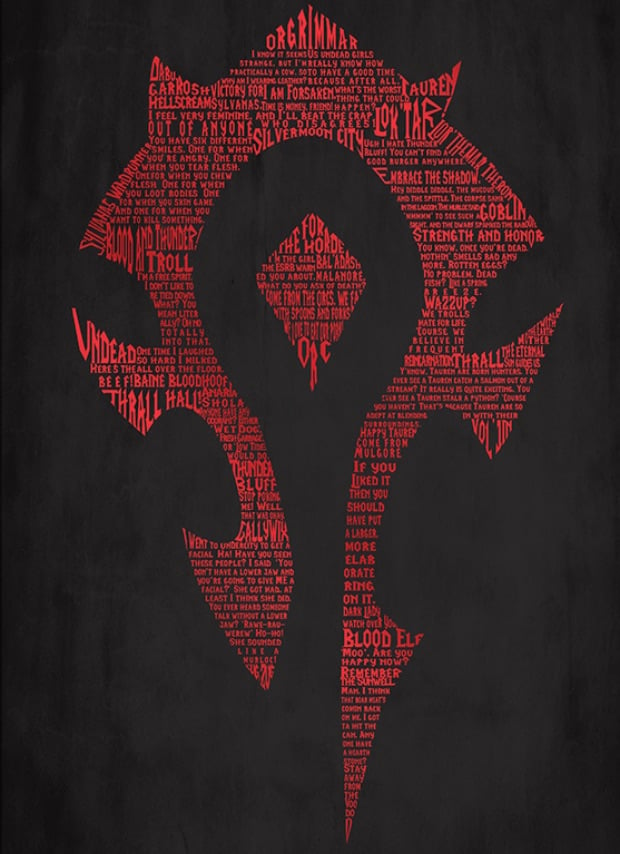 Well, the first step is sourcing the quotes that I want to use. I always have an idea of some of the iconic phrases that have to be included, but doing a new piece always means going back to the movie (or book, or TV series, etc) to fill in the rest. So, once I have my quotes, I design the final image, and then begin laying in text letter by letter in Illustrator. It is very trial and error. There are many moments where I have to undo my last half an hour’s worth of work because the quote I want to use doesn’t quite fit in the space where I want to use it. When that’s finally done I have a black and white layout that gets painted in Photoshop.

How did you choose the quotes used in the Alliance and Horde pieces?

I touched on that a little above. Besides all of that flavor text I’ve also included names of races and their leaders and the major cities (at the time I made the pieces, either pre- or during Cataclysm). All of it of course is specific to the Alliance and the Horde, respectively. I wanted each piece to really have the flavor of what it’s like to be a part of that faction.

How long does it take to make one of your word art pieces?

Well, first the quotes have to be sourced. Recently that meant spending about six weeks straight watching every last episode of Supernatural. Like 5-6 episodes a day. It was insane. For other pieces it’s just a rewatch of a movie. Once that’s done the completed piece will take about 20-30 hours.

Do you have a favorite of the art you’ve made so far (Warcraft or otherwise)?

Well as far as WoW goes I have to say that I will always be Horde but the Alliance insignia does make for a much more impressive piece of art. It’s all those swooping details on the lion’s head. In terms of all of my work, I think right now I’m happiest with my pieces based on The Lord of the Rings.

I’m always cooking up my next typography piece which I think will be based on Spaceballs, but I also just finished illustrating my first children’s book and I’m working on a series of ABC books to help children learn to read and to geek at the same time.

Blizzard Watch is made possible by people like you.
Please consider supporting our Patreon!
Filed Under: Art, Arts And Crafts, Handmade, Poster, SkahfeeStudios, Typography, World Of Warcraft
Advertisement