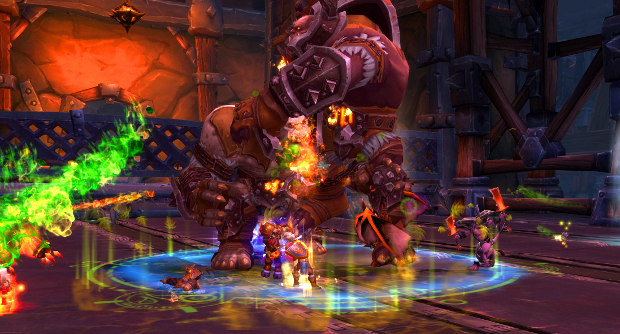 This week I’m going to shift gears from general tutorials and instead do a quick look at tips and tricks for tanking half of the bosses in Blackrock Foundry. As they say, it’s better to strike while the iron is hot — BRF has been out long enough that I’m sure interest in the place is beginning to cool off.

Unlike my previous two columns, I’m shooting for brevity this time around. I’m going to tell you exactly what you need to know for the meat of the encounters and in a format that will be easy to scan.

(Do note, these encounter descriptions are for the pre-Mythic versions of the fights.)

Is Divine Protection glyphed? No, Inferno Slice is the biggest threat and you need extra magic damage mitigation
Speed boost talent? Doesn’t matter
How many stacks to tank swap? After the third Inferno Slice

I imagine that when Gruul was being designed the theme of the fight was “keep taunt on cooldown for the entirety of the encounter.” You are going to be taunting a lot here. If you mess up and taunt at the wrong time, your taunt will likely be unavailable when it’s actually needed.

To tank the fight, tank A stands in front of the boss at 12 o’clock, and the raid splits evenly at 4 and 8 o’clock with tank B amongst one of the raid groups. The tanks then dance as follows:

There’s a stacking debuff, Overwhelming Blows, but this can be ignored as long as tanks are swapping after three Slices.

Inferno Slice is pretty painful, and it’s gets 20% more ouch with each strike, so how do you manage eating three? First, make sure Divine Protection is unglyphed (as mentioned) which will cover the first and third Slice if you are talented into Unbreakable Spirit. For the second you can use unglyphed Ardent Defender to shave off 20% of the damage. In addition, each time you are about to eat a Slice, make sure to use Shield of the Righteous so you get the benefit of the physical damage reduction effect.

If you want to get fancy (and you’re a paladin, so of course you do) you can solo-soak an Inferno Slice with a bubble-taunt (taunt, cast Divine Shield, take hit, /clearaura Divine Shield) and avoid the raid taking any damage.

Is Divine Protection glyphed? Yes, you need to reduce as much physical damage as possible from Acid Torrent (more below)
Speed boost talent? Speed of Light, to quickly evac when the boss is rolling at you
How many stacks to tank swap? After every Acid Torrent

Oregorger requires some finicky positioning to make sure everything is in its proper place. To give you an idea of how my raid positions this fight, check out this screenshot: 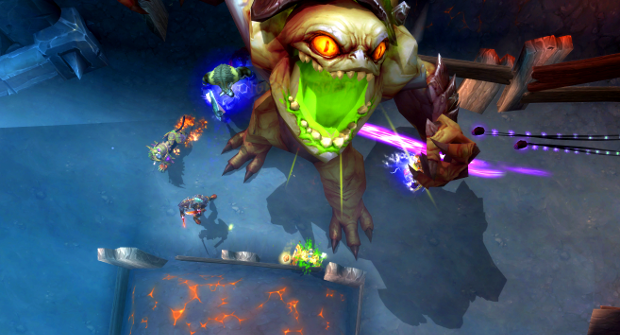 Tank A, the current on-tank, is at 6 o’clock, facing the boss at a wall. Tank B, the current off-tank (and ranged behind him, off-screen), is at 3 o’clock.

The order of operations for this fight is as follows:

The trick with Acid Torrent is that ranged is going to take a base amount of damage no matter what, but they also take extra damage depending on how much physical damage the off-tank manages to mitigate for their own hit. The paladin’s toolbox for this role is pretty deep and all of these are options:

External cooldowns work as well, and you can assist your co-tank with Hand of Sacrifice.

Oregorger has seven acid torrents per phase, so you need to be prepared to handle three or four of them. You can use Divine Protection twice per phase, with Unbreakable Spirit, and Divine Shield once per phase. That’s three right there. For the fourth you can use Ardent Defender or one of your big guns.

For the rolling phase, damage done is the name of the game. Glyph for Focused Shield to help out on the boxes a bit. If you get hit by the boss, it won’t kill you, but don’t be reckless.

Is Divine Protection glyphed? Yes, most damage you take will be physical unless you get hit by the machinery
Speed boost talent? Long Arm of the Law, you are going to be moving a lot and a boss is always within reach
How many stacks to tank swap? No tank swapping. Every tank gets a boss!

A classic twins fight with relatively simple tanking mechanics. Most of your bandwidth on this fight is going to be devoted to not getting run over by the flaming pop-tarts or crushed under the giant pulverizers.

For the Searing Plates, do note that you can stand in the gaps between the belts and not move at all. As long as you are on the edge of the gap, away from the belt that the plate is rolling in on, you won’t actually take damage from it.

Tank the bosses together to increase damage via cleaves. Your DPS will thank you.

The most dangerous part of the fight is when one of the tanks gets picked up, to be suplexed into the other. Glyphed Divine Protection is a good basic choice for the incoming damage. Guardian of Ancient Kings makes for a good panic button as well. I find myself glyphing Ardent Defender and using that in addition to DP, just in case. If you are not the one picked up, make sure to have your Shield of the Righteous buff up right before your co-tank gets smashed into your face.

In addition, watch out for when one of the two bosses is bouncing around. You and your co-tank need to be far enough apart that you don’t get each other debuffed with Shattered Vertebrae. Likewise, watch for melee players zoning out and not moving out of melee.

Is Divine Protection glyphed? Yes, there’s an awful lot of physical damage in this fight
Speed boost talent? Long Arm of the Law, for cheesing Rend and Tear stacks and making healers /swoon
How many stacks to tank swap? Two stacks of Rend and Tear, two stacks of Crush Armor, twelve stacks of Seared Flesh

This is a pretty straightforward fight to tank. The biggest issue is successfully going to be doing your job as the fight gets more and more intense.

If you are actively tanking the boss, you will have to deal with Rend and Tear at certain points. If you want to showboat, it is perfectly possible to avoid eating stacks of that debuff by using Judgment as he jumps away and letting Long Arm of the Law carry you to safety, speedily strafing out of his return strike. Just don’t get your co-tank hit.

This is a bit of a pain to manage, though, and the debuff is not going to kill you. There’s little value in avoiding the debuff outside of bragging rights.

The off-tank needs to go grab the pack of beasts being called in from the side gate. There are six, so fire off an Avenger’s Shield to grab five, and use Judgment to catch the attention of the last one — all from ranged. If you are tanking the boss with the smaller beasts, use Divine Protection.

For successive beast phases, just tank swap as the debuffs demand. And don’t let the smaller beasts eat a healer.

For the last phase, the corpses of the smaller beasts will radiate fire damage, so you need to move after a pack is dealt with.

Fun fact: You can use Divine Shield/Hand of Protection to clear Rend and Tear/Crush Armor stacks.

Is Divine Protection glyphed? Yes, you’re going to be taking a lot of physical damage from the adds
Speed boost talent? Speed of Light, you won’t need the boost that often
How many stacks to tank swap? Two stacks of Enkindle

This is a very add-heavy fight. Accordingly, I recommend talenting into Holy Shield. You’ll want the extra block chance.

Have an agreement with your co-tank for reinforcement trains in advance, regarding who picks up which pack of adds. You can pre-position yourself where the adds hop out of the train and use Avenger’s Shield to pick up most of them. Follow up with AoE damage to grab aggro on the rest, and then drag the melee adds to a main pile for cleave damage.

If a Man-at-Arms is active, you need to be careful about Iron Bellow. That attack will do a lot of physical damage, which can be ill-timed depending on how many enemies you are currently tanking. Definitely have Shield of the Righteous active when it hits, and use Divine Protection to take the edge off as well (if you have a lot on your plate).

When the raid has to split, make sure that the tank with no stacks of Enkindle gets custody of the boss. The first split is fairly innocuous, but the second one is very dangerous. For the second one, I usually use glyphed Divine Protection and chug a Draenic Armor Potion as all the adds show up. Once DP falls off, I cast Guardian of the Ancient Kings to smooth out the incoming damage. Eventually enough adds will be dead that the incoming damage should level out.

Do not let any adds get behind you. You need all the help you can get from your avoidance/mitigation. The way they enter the fight and the sheer number of them makes it easy to get visually overwhelmed.

Lastly, while you shouldn’t be getting hit by a train at any point — if you find one bearing down on you, Divine Shield will negate the damage. It will not, however, negate your co-tank laughing at you.

Check back next time for a rundown of the rest of BRF’s bosses!