Know Your Lore: Garona and the Horde 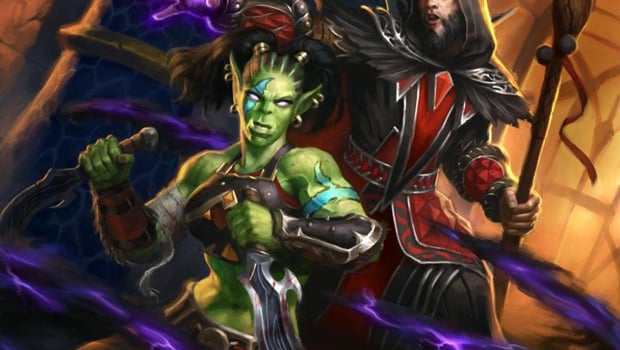 Half-breed. This is by far Garona’s most distinguishing feature — half-orc, half-draenei, but inexplicably led to believe she was half-human for a period of time. She never knew her mother, prematurely aged and molded into a tool of the Shadow Council, an assassin on command. Garona was also the ambassador to Medivh during the First War, a point of contact for the Horde that poured through the Dark Portal and stormed Azeroth. Her origins are some of the most unpleasant in World of Warcraft, and her future has been left in a space of uncertainty.

But who is Garona, really? A puppet, a pawn, a cleverly planted piece for a game she scarcely realized she was playing. There were moments of lucid, terrifying clarity for the assassin, but those moments were hardly significant in comparison to what she did while she was firmly under the Council’s control. She’s spent the entirety of her life regretting the orders she carried out, but she didn’t have a choice in the matter — she was raised to be a compliant tool, whether she was willing or no. 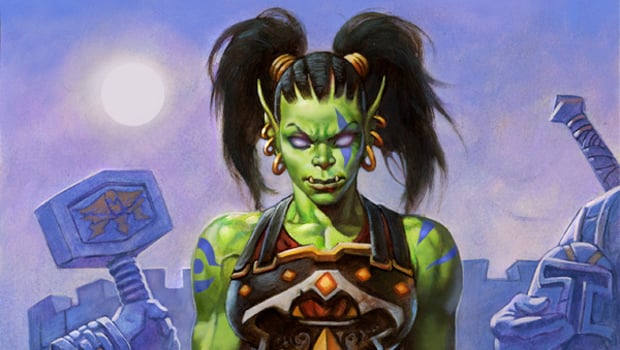 Garona’s father is a mystery, but her mother far less so — she was Vindicator Maraad’s sister, taken by the Horde for Gul’dan’s twisted experiments. One of these was the child Garona, who was not a child for long. The Horde needed soldiers, and Gul’dan found a way to make that happen by prematurely aging those too young to fight. He did it to the various orc clans, and he did it to Garona as well, robbing her of any chance at a childhood and instead beginning her training almost immediately. But he wasn’t the only one who had Garona in control.

Not only was she trained to be an assassin, her mind was broken, bent to respond to the will of the Shadow Council. Although she was raised with orcs, she was never really accepted, her strange appearance and apparent deformities were enough to keep any pure-blooded orc at bay. Yet she was incredibly well-versed in orc culture, and that made her an even bigger asset to the Shadow Council, who gave her the role of interpreter. Gul’dan had her working as his own personal spy and assassin, led her to believe she was half-human. It helped, in a way, with her relations with the humans.

She acted as an emissary of the Horde to Medivh, who, despite being human, always treated her with respect and demanded others do the same. During her stay in Karazhan, Garona met Khadgar — then a young man, Medivh’s apprentice. The two butted heads at first, but bonded as they realized Medivh was acting strange — far stranger than usual. While investigating this, the two witnessed a vision from the past that showed Medivh opening the Dark Portal and bringing the orcs through to Azeroth. 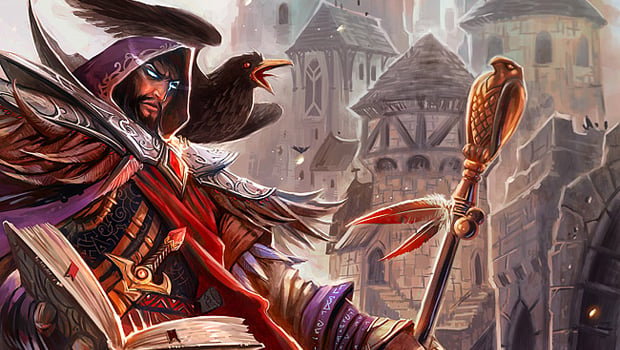 Garona had a secret of her own — she was carrying Medivh’s child. Garona suffered while living with the orcs. She was never treated with anything remotely resembling kindness. But with Medivh, she was respected, encouraged. She felt human with him, a side of her heritage she was never really allowed to explore. Her humanity was a lie, but she didn’t know it — and in Medivh she sensed a man who had great plans for the world, ideas to better it, sentiments she supported fully.

But when Medivh was revealed to be the man that brought the orcs to Azeroth, that delightful picture of the future Garona dreamed of came crashing down around her ears. It became blatantly clear that there was more to Medivh than either she or Khadgar had previously thought, a darker side. And while they worked on solving that mystery, they witnessed more visions, including one that absolutely terrified Garona — a vision of herself, killing King Llane Wrynn. Llane was one of a few humans who treated Garona with kindness from the moment they first met, and the idea of killing him in cold blood horrified her. Was she just like Medivh, a creature of darkness within a noble, good shell?

Medivh was slain by Khadgar and Anduin Lothar — and when the deed was done, Garona was nowhere to be found. And although she recoiled from the very idea, she soon found herself in Stormwind’s throne room with knife in hand, carving out the heart of King Llane Wrynn, sobbing through the process and unable to stop. Varian, Llane’s son, witnessed the entire act — something that would continue to haunt him for the rest of his life. As for Garona, she fled the scene, only to be caught by Orgrim Doomhammer and tortured until she revealed the location of the Shadow Council. 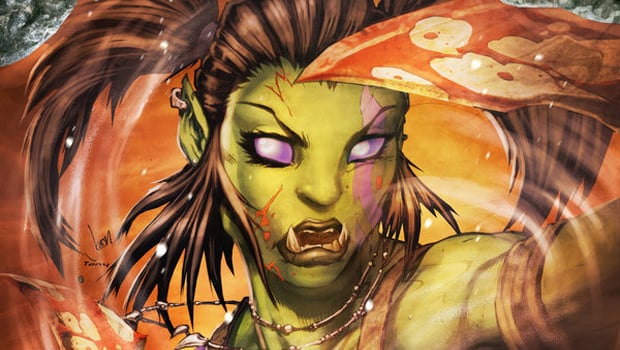 The Shadow Council was dismantled, and Garona fled before she could be killed, giving birth to her son at some point during or after the Second War. But Garona didn’t allow herself to stay with the child. How could she? If she could be so easily, mindlessly ordered to kill King Llane, there was nothing stopping anyone from making her do the same to her son. And so she gave the child, Med’an, to Meryl Winterstorm, an undead mage and old friend, asking him to never tell Med’an about her, and instead raise the boy in peace.

Still, she watched Med’an grow from afar, always protectively hovering just out of sight. Years later, during the events of Burning Crusade, Med’an had grown into a strong young man, the subject of a curious prophecy. When an attempt was made on his life, Garona appeared to save him — and was promptly captured by Stasia Fallshadow and taken to Ahn’Qiraj. Her worst nightmare awaited her — the ogre Cho’gall, who knew the commands to control her mind. Cho’gall used those commands and ordered her to travel to Theramore, interrupt a peace summit being held between Thrall and Varian Wrynn, and murder Stormwind’s king just as she’d murdered his father.

Thankfully, she didn’t accomplish the task. But Varian recognized her — how could he forget the face of his father’s murderer? Although Varian wanted her dead, Jaina Proudmoore realized a spell had been placed on Garona that controlled her mind, one that could not be removed without potentially killing Garona. But she demanded Jaina do so, offered information in exchange for help freeing her son. The pain was exquisite, but Med’an’s location was revealed, to Garona’s relief. Late that night, she was freed.

The man who freed her? None other than Vindicator Maarad, her uncle. Maraad told Garona of her heritage — her real heritage — and helped save Med’an. In the end, Cho’gall — the last creature on Azeroth who knew the commands to control her mind — was presumed dead. Garona was free, but at great cost. King Varian Wrynn still wanted her executed for his father’s murder. She was a fugitive, but at least she was free to hunt down the remains of Cho’gall’s organization, the Twilight’s Hammer, and put an end to the cult for good.

What she didn’t know was that Cho’gall was very much alive, a fact that came up in Cataclysm. Garona made an appearance in the Twilight Highlands, helping Horde players with quests in the zone with the intent of killing Cho’gall for good. Although her attempt was unsuccessful, and Cho’gall managed to escape into the Bastion of Twilight, Garona did not make an appearance during the raid. In fact, she simply disappeared, and has yet to be seen on Azeroth again.

As for Maraad, he traveled to Northrend and served his time there, later returning to the Exodar and then traveling to Draenor in Warlords. Meanwhile Med’an has never been seen in game, and his current whereabouts are as unknown as his mother’s. By all appearances, Garona has simply vanished without a trace, and whether or not she knows about Cho’gall’s downfall at our hands is a complete mystery. 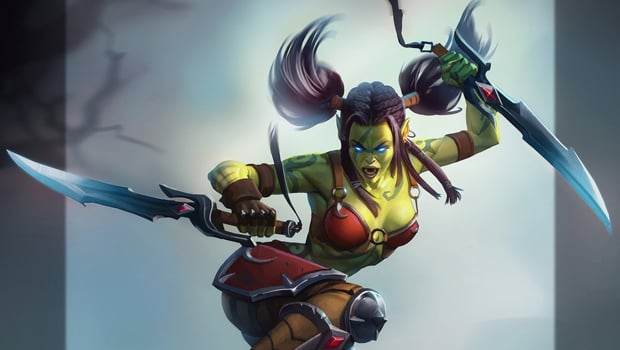 Which is decidedly strange, when you think about it. Yes, Garona is currently still a fugitive from the Alliance. But you would have expected, especially given her vehemence regarding Cho’gall, for her to make an appearance during that boss fight. You would have expected her to show her face at some point in the Bastion of Twilight, even if it was just a brief glimpse after Cho’gall was defeated. For Garona, Cho’gall’s defeat meant everything — it was freedom, real freedom. You’d think she would have been there to witness and claim that freedom firsthand.

As it stands, Garona’s whereabouts on Azeroth are unknown. Perhaps she is simply enjoying that freedom, still killing off the remnants of the Twilight’s Hammer, although they seem to be largely wiped out by the end of Cataclysm. Perhaps she’s run off to find her son, and is currently spending time with Med’an wherever he happens to be hiding. It seems that her story, as far as Azeroth is concerned, is complete.

But there’s a different side to Garona — or rather, there’s a different Garona altogether, running around on Draenor and raising chaos. What do we know about her — and are her origins the same as the Azeroth original? Next week we’ll look at Garona, Khadgar, Gul’dan, and the Legendary quest chain … as well as some interesting questions regarding the fate of the Shadow Council’s premiere assassin.