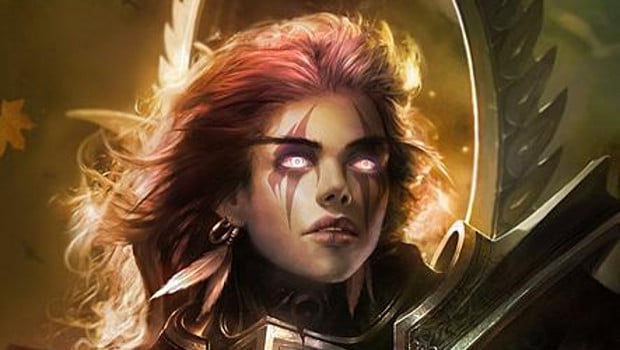 Listening to Blur’s Song 2 and just letting the beat roll over me. I know it’s supposed to be satirical, but that’s the problem with doing a satire too well — they actually crafted one of the best grunge songs I’ve ever heard in the process. It’s up there with Sebadoh’s Flame and Pearl Jam’s Go, in my opinion.

The picture of Maiev is unrelated.

What kind of role do you see Yrel taking from here on out? I feel like her character development has come to a halt.

Well, she’s a member of the Exarch Council and probably its most proactive member, so I expect we’ll continue to see her pushing forward against the Iron Horde. But once we’re done fighting them here on Draenor? Honestly, I don’t know. It’s possible we won’t see her anymore. It depends on how the expansion ends, ultimately. If we end up evacuating Draenor before Gul’dan blows the whole place up, we may end up with a lot more draenei over at the Exodar, and Yrel would be forced to deal with a Velen she doesn’t really know.

It’s more likely that we’ll end up defeating the Fel Iron Horde (or whatever we call them now that they’re both) and Yrel and the draenei will end up in our rear view mirrors as we head off to new adventures, but man, I hope not.

Has there been any more information on the tuning of mythic dungeons?  Although I am currently without a raid group, I might actually be able to scrape together a group of 5 friends.  That would be great!  But if it’s tuned for people with much more than lfr gear we’ll be screwed.  Also, I notice that they called it an alternate progression path.  I can already hear the raiding community complaining that they HAVE to do these now.

Right now we don’t know much at all about Mythics. Things I expect –

That’s my current thinking, anyway. We’ll see how it all shakes out.

Q4Q: While we still don’t know who is in/controlling Khadgar – I disagree with Anne it is Medivh :-) – , doesn’t the Warcraft Trailer being shown before the dinosaur laden Jurassic World prove that Guldan is really Rossi?

I am not Gul’dan. Now drink.

Seriously, I’m not Gul’dan. If I was trying to get a bunch of orcs to drink demon blood, and I was asked what it was going to cost them, my answer would have been nothing instead of everything. See, I figure, once you’re there, you might as well lie, it’s not like you’re going to make it worse.

Late night Q4tQ: What is your favourite accent and language in WoW’s universe? My favourite accent is a toss up between Tauren, Worgen / Gilnean and Draenei while my favourite language is Taur-ahe because I really like the Tauren in general and their language seems rather interesting.

Strange question I know but I’ve never seen anyone ask about it before so here you are!

I like the draenei accents (big surprise) and I like both the current draenei language and its eredun ancestor, which morphed into demonic. For Horde, I gotta go with tauren/taur-ahe. I’m also a fan of Darnassian/Thalassian and think the night and blood elves have some interesting similarities/differences in their language groups.

Since there’s a raid, Mythic dungeons (with the possibility of some new dungeons in the process) and a new quest hub/garrison feature to test, I wouldn’t be surprised if the PTR lasts into July/August.