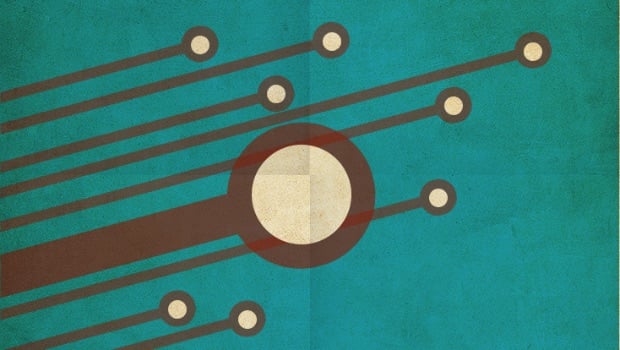 Could you define your class and spec in a single word? Unless you just give out the spec name, it can be kind of tricky to prune your entire game down to just one word. But what about a single image? Maybe you’d use an icon or take a screenshot of an iconic class ability… but even that’s a challenge. After all, what single ability defines your specialization?

On Reddit, Matt Stevenson took this question as a challenge… and went on to create minimalist poster art for each class and spec (you can find them on Etsy, too). Even though these are simplistic designs, they manage to catch the flair of every WoW playstyle. When we caught sight of these, we had to catch up with him to figure out how they came to be.

Blizzard Watch: What do you play in WoW?

Matt: My absolute favorites are my Holy Paladin and my Mistweaver. I’ve been an avid healer since WotLK, only switching to DPS when needed for leveling. There’s something very fresh about Monk heal variations. I get to pick from several different “styles” within the spec. In addition to fistweaving or mistweaving there’s soothing mist style, renewing mists rotations, and some talents to play with that change up everything.

What’s your background in the arts?

I’m a Creative Director at a digital marketing agency, so I’m around art all the time. My background is in design and I love minimalist/Swiss posters. It’s fun to create a visual puzzle for people to figure out using just symbols and shapes. Some artists are really good at toeing the line between too obvious and so abstract that no one knows what it is you’re trying to represent.

Have you done any Warcraft art before?

My previous incarnation of this series was to take Marvel characters and associate them with a class and spec. For instance, Wolverine would be a Fury Warrior, Spider-man would probably be a Combat Rogue, and someone like Storm could be an Elemental Shaman. I wasn’t creating original art, just repurposing existing art from some favorites like Todd McFarlane or Jack Kirby, so I can’t count it as my own. It was similar to this graphic series because it was an exploration of the taxonomy of the class system. I love to visually organize and create systems around groups of things. 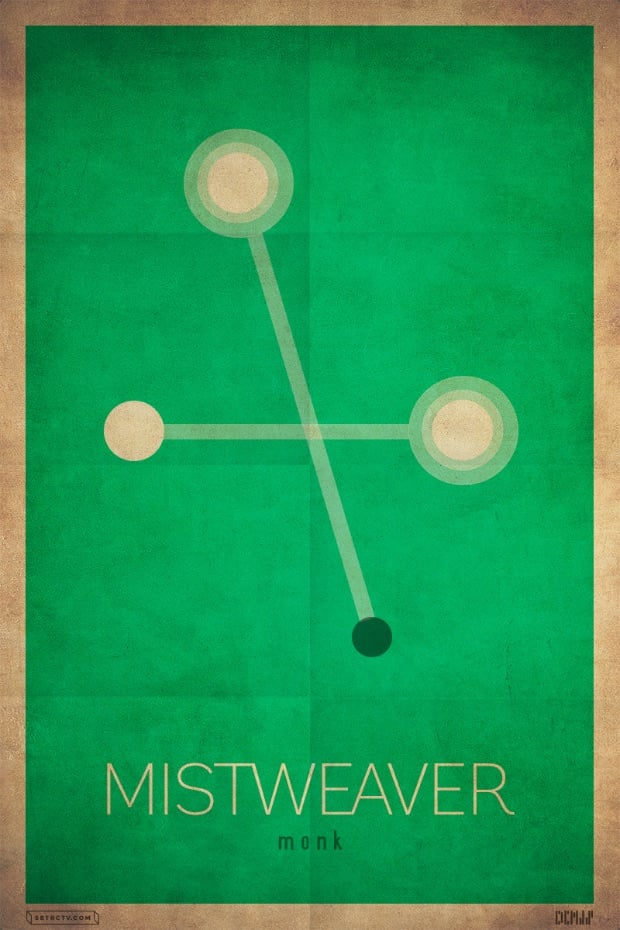 How did this poster project get started? Hitting every class and spec seems like a large undertaking!

It was! I wanted to see if I could represent the essence of a class with as few shapes as possible. It started with the Mistweaver poster. Having (casually) raided with my monk I knew the crossing streams of Soothing Mist was an immediate indicator that the monk in your group was doing their thing. Other monks got it right away, while some people couldn’t quite get it, but when explained they had that great “Ah ha!” moment.

How did you decide on the designs for each class and spec?

After the monk and paladin series I tried to do the same with the classes I was familiar with. Druids were easy, whereas I had absolutely no clue what I was doing when it came to hunters. My lack of class knowledge shows in the rogue, warrior, and warlock series as well. I reached out to the Reddit community for guidance and they gave me some great synopses on the missing specs. Basically, it came down to signature spells. They can define a class (as I suppose Blizzard intended) and make a character’s spec instantly recognizable.

WoW Minimalist Class Posters: Behind the Scenes from DCMJS on Vimeo.

Could you give us a step-by-step on what’s involved in making one of these posters?

Sure! I actually made a little video here for a redditor that asked to see how it was done. All of the posters are in one big Photoshop file, with a texture layer on top. I make the shapes in Illustrator and position them on the 24×26 stage. Then I pick an appropriate typeface to represent each spec and typeset the name below.

About how long did it take to make each poster? How long did the entire project take?

The entire project took about 2 days to complete. Once I did the Mistweaver poster I knew I had something worth sharing with others and went though the easier classes quickly. The individual designs ranged from 15 minutes (Ret Pally, Balance Druid, Frost Mage) to over an hour (Unholy Death Knight, Fire Mage). I must have redesigned the Fire Mage poster at least 4 times, ugh. 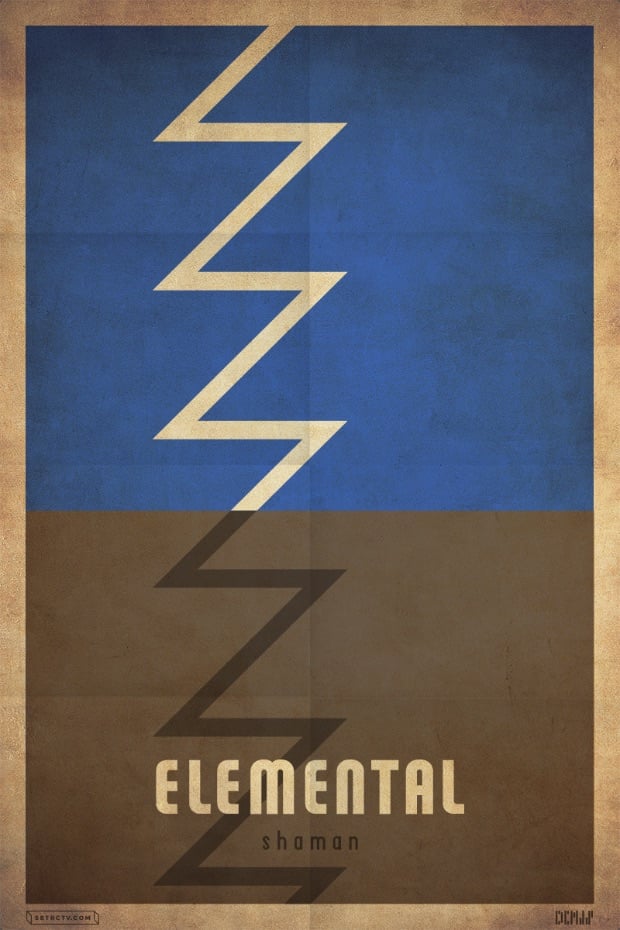 Do you have a favorite of the pieces you’ve made?

I was really struggling (even avoiding) coming up with something for the Elemental Shaman. I love the spec and didn’t want to be cliché with just a lightning bolt. Then I realized I could mash-up two iconic spells in one poster by having the bolt become the broken ground in earthquake! It’s simple and unmistakable. The Combat Rogue poster is also a favorite simply because I have zero idea how to play a rogue and the idea was successful. I looked up the spec on Icy Veins and learned about the green/yellow/red damage increase buff. In my ignorance it reminded me of a stoplight. Unbelievably, folks who avidly play the class tell me it’s spot-on, I lucked out with that one. 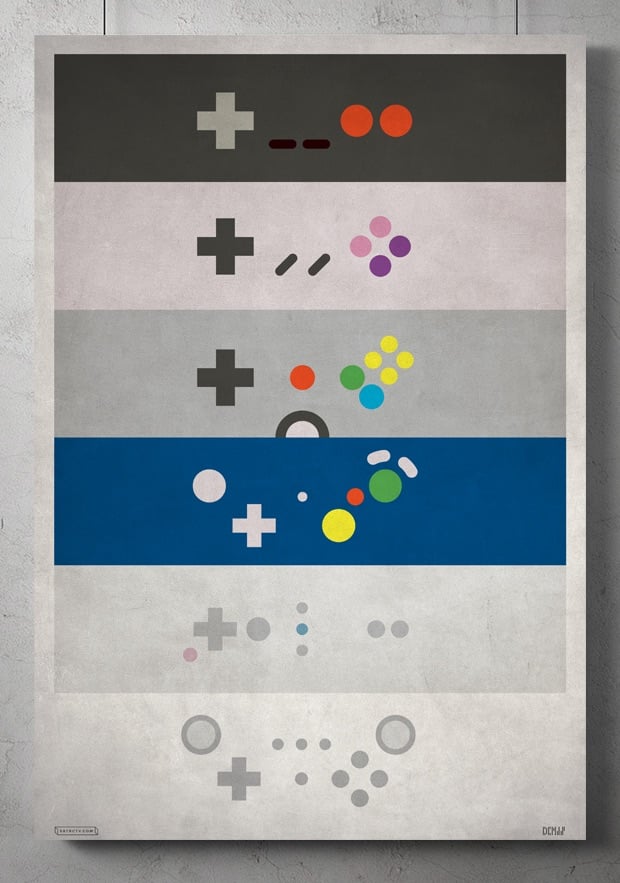 Now that the Etsy store is up I’m churning out all of these other minimalist ideas I’ve had bottled up for a while. I’m doing a series on weapons of the 80s, a set on game controllers, and even branching out into some Pokemon minimalist exercises. It’s a ton of fun to go back thorough my childhood and recreate game/TV/comic icons for design content. You can visit the store at SBTRCTV on Etsy (“Subtractive” subtracting the vowels :)

Currently, I have high-resolution print-quality digital downloads in there while I work out logistics of getting real posters printed. Stay tuned for updates! The idea behind the store is to give dorks like me some great wall art that other non-gamers can also aesthetically appreciate. It just looks like cool shapes to them, but has deeper, much more geeky meaning to us!

That’s all for BlizzCrafts this week — but check back next week for another selection of cool Blizzard crafts! Have Blizzard arts and crafts of your own you’d like to see on Blizzard Watch? Send them our way! Submissions and suggestions should be sent to liz at blizzardwatch dot com.