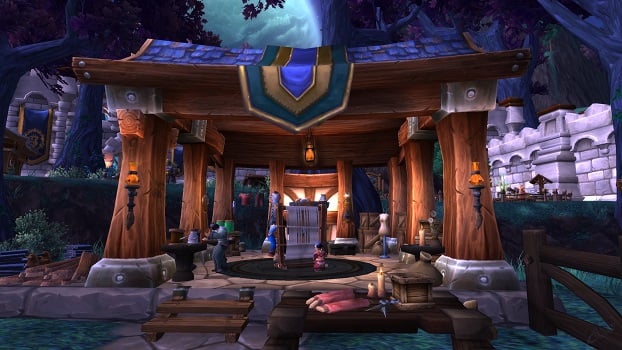 Is it okay to talk about a member’s “dirty laundry” after they left? What about pugging progression bosses outside your guild’s raids? What can you do if you think your officers promoted the wrong person? This week’s OQ has the answers!

smartazjb0y asked
What’s your opinion on airing dirty laundry publicly? Invariably every time a person leaves (especially if it’s a raider) an officer will say why and usually also share their negative opinion of that person, either over Vent or in guild chat. Sometimes it’s in a “just so everyone knows since everyone’s probably curious about it, here’s why we had to let them go” but sometimes it seems to be a “well we didn’t like them so let’s sh*ttalk.” We’re a midcore raid that’s pretty close so maybe they just think we’re close enough that there shouldn’t be any secrecy, but I also do think at least some stuff should be leadership-only.

I’m not a fan of this behavior. It doesn’t add anything to the guild’s atmosphere except bad feelings and mistrust. After all, it makes people wonder what you will say about them if they ever decide to leave. It discourages your existing members from confiding in you as an officer when they have a problem. That means problems will fester, unknown to you, until they become much bigger problems.

There’s also a huge difference between providing a reason for a departure and badmouthing the person. It’s healthy to acknowledge departures. It gives you an opportunity to address that person’s specific concerns about the guild to make sure you don’t lose anyone else to the same issue. It shuts down the rumor mill before it can start churning — and it will if the officers say nothing.

There are exceptions. If the person left for sensitive personal reasons and they don’t want the guild to know, the officers should always respect that.

Badmouthing the person behind their back, on the other hand, shows immaturity. It’s okay to make a tasteful joke or two about why they left. It helps to defuse the tension and disappointment of losing a valued guild member. But launching a diatribe makes it seem like the person’s /gquit completely rattled you. That in turn can undermine your guild’s confidence in your leadership abilities. Don’t do it.

Sylannia asked
There’s something thats been bothering me lately and its due to the new flexi system for all modes bar mythic – basically my guild is still progressing through heroic BRF (8/10 atm), thing is the motivation clearly isnt there for some people to push progress, and prefer to PUG the kills we don’t manage (like Blast Furnace and Blackhand himself).

Do you feel its ok for these members to go and PUG the bosses we arent comfortably getting down (and still need to progress on)? Or is it something that should be kept to – that mains shouldn’t PUG progress bosses?

Personally I feel if all the members arent taking part in learning new fights as a guild then why are they part of a guild in the first place?

Is this something that can resonably be asked of members to NOT go out pugging bosses we haven’t yet downed? If so how can it be brought up?

I would also like to clarify the pugging takes place when theres still one full raid night to go and not after the guild’s runs are done for that week.

As long as they show up when your own guild is trying to down these bosses, I don’t have a problem with it. They aren’t locked out from participating in your own raids, so they can still help. In fact, they will probably be more helpful to your team than the members who haven’t pugged a progression boss.

They’ve seen the entire fight. They know at least one strategy that works. They are likely to know what the pitfalls are and can warn other guild members about them. They are far less likely to fail at boss mechanics. Having them on the team at that point can only help.

While I see your point about learning new bosses as a guild, not everyone feels the same. That’s a personal choice and not one you can or should make for others.

Now, if they’re pugging those kills and then not showing up for guild raids without a legit excuse, that is a huge problem and your officers must put a stop to it.

Bangkook asked
I have sort of a weird situation… A reversal of sorts?

So instead of saying that I have a problem as an officer with a member, I have rather a problem WITH an officer as a member. My problem is: I feel as though that officer isn’t suited as well for the lead role (lead heal) as myself or others. The other night, that officer was in a very bad mood and that was also the night of the announcement of leaders for roles. Since then, there has been some tension between that officer and myself.

I would immediately come and tell the other officers, but they are all friends and seem to be almost like a council that only pulls leads from within their own little group (emphasis on seems. I’m not entirely sure, but it seems to be that way to someone on the outside looking in). How do I come to this officer(s) without it seemingly like I’m being personally confrontational or accusatory?

I’m sorry to say this is not a weird situation — it happens all the time. Conflict and unhappiness can go both ways!

There’s no good solution for you here, however. Whatever your gripes are, voicing them at this point will only make you look petty at best or power-hungry at worst, if you suggest yourself as the healing lead instead.

A tight-knit officer corps is common, and it’s common for the officers to trust each other over lower-ranking members. Having all of your role leads as officers makes life easier for them, because they have a private channel by default where they can communicate (and usually a private forum and voice chat channel also).

Granted, they could choose someone else for the position and raise them to officer rank at the same time. But they didn’t. You have to abide by that decision for now. If the new healing lead is terrible at the job, that will become apparent to everyone soon enough.

In the meantime, try to be helpful and speak up when you have a good idea on solving the healing for an encounter. Don’t be petulant or spiteful about it. Don’t throw the healing lead under the elekk — stay positive and try to help the team. Maybe in time the officers will recognize that you are better suited for the role. But don’t be upset if they don’t. The most important thing is the raid team’s success — individual accolades or promotions are a distant second.