UC Berkeley wins the grand finals of Heroes of the Dorm 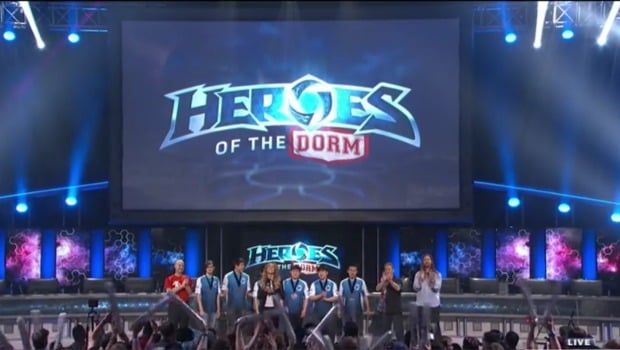 After an intense day of close battles and last-minute Hail Mary moves, UC Berkeley’s “Golden Bears” takes the Heroes of the Dorm title for the 2015 Heroes of the Storm collegiate tournament. The 5 players on the wining team will each have their college tuition paid for and the three other teams that competed today will receive a custom PC and a variety of gaming gear.

After Arizona State University took down Boston College (2-1) and UC Berkeley demolished Illinois Urbana-Champaign (2-0) earlier in the day the two teams made it to the Grand Finals of Heroes of the Dorm. Berkeley took game 1 decisively, but ASU came back strong in game 2 giving Berkeley their first loss of the entire season and tying the best of 5 match up at 1-1. Game 3 boxed both teams into the tight corridors of the Haunted Mines and despite an amazing dive at their enemy’s core by ASU, UC Berkeley came out the winner at the last minute in a push that had to work or they would have left themselves lethally exposed.

At 2-1 with Berkeley in the lead, the losing team got to choose the map and ASU went with Sky Temple and it played to their strengths. Working the map mechanics hard and coming out ahead in team fights, ASU took the fourth game to bring the match up to 2-2. The final match took place on the Dragon Shire map, as picked by Berkeley, and ASU came out very aggressive, winning team fights and picking up the dragon twice in a row. But Berkeley pushed back hard and after benching two ASU members out of the game on long respawn timers, Berkeley grabbed the dragon, rushed the core and took the title.

Popular hero picks today include Diablo, Sylvanas, Illidan, Jaina and Tassadar. And, of course, The Lost Vikings made a few appearances including the final game, though they weren’t enough to cinch the victory for ASU.

The event itself was like a mini-BlizzCon. Not only was there the main stage, but a Hearthstone lounge, tattoo tent, green-screen picture area, cosplay and more. The auditorium was filled to capacity before the first match even began.

Did you play in the Heroes of the Dorm fantasy bracket? How did you do?

Blizzard Watch is made possible by people like you.
Please consider supporting our Patreon!
Filed Under: Arizona-state-university, Asu, Cal-berkeley, Esports, Heroes Of The Dorm, Heroes-of-the-dorm-winner, Uc-berkeley
Advertisement