Heroes of the Storm: A primer for League of Legends players

It’s natural for avid players of one of the most popular existing MOBAs, League of Legends, to be curious about Blizzard’s upcoming Heroes of the Storm. This is a brief look at some of the similarities & differences between the games so League players know what to expect.

I’ll begin by saying that this post is meant for players who are familiar with League of Legends already, so I’m going to avoid explaining things that are common knowledge to people who play that game. If you don’t play League but are interested in Heroes, you’ll likely benefit from reading this article, but you may come out confused about what a Yordle is.

The game begins in reverse to how League operates. In Heroes of the Storm, you begin by choosing a hero and your preferred skin. Like League, there’s a free rotation. Five heroes are available from player level 1, with an additional hero at player levels 12 and 15. The rotation is posted on this thread on the Heroes forums and shown on the Battle.net launcher. You can choose from one of four AI configurations at the start, from the classic five versus five PVP Quick Match to completely solo player with four AI teammates against five AI opponents in Practice mode. There’s also Try Me mode in the shop, used to test out a hero before you buy. As you get more experienced, you can unlock more game modes similar to League‘s ranked play.

Only after you choose your hero and game type do you queue for a match. This takes a bit of control out of the the hands of players, but this isn’t necessarily a bad thing if you’re playing casually. The matchmaker will try to make teams balanced by roles, and this way you can play whatever hero you’d like and not have to worry about it. More advanced modes do use drafting, though. 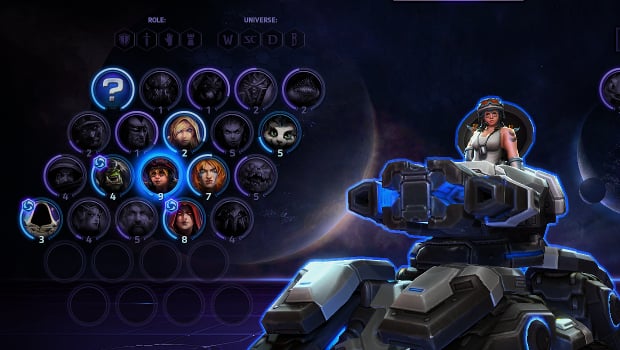 You move your hero around the map by right clicking the ground, and the default ability hotkeys are identical to those of League of Legends. Unlike League, your hero begins with all three of its normal abilities ready to use (with the notable exception of the Lost Vikings hero) and those abilities scale automatically as you level up. Each hero has a choice between two heroic abilities at level 10, filling the role of an Ultimate. Each hero also has a trait, most of which are passive. These are similar to eg, Annie’s Pyromania ability. Heroes that have an active component to their trait can activate it with the D key. Heroes unlocking additional abilities as they level are assigned to keys 1-6. There are no extra baseline abilities analogous to Summoner Spells.

The bare bones of a match are similar to Summoner’s Rift. There are 2-3 lanes per map you have to traverse with the help of minions that will absorb the shots from towers that fire at you. The object of the game is to destroy, or “go HAM on” the core right outside the enemy’s base, like the nexus. A notable difference is that there are no inhibitors. You get stronger catapult minions after you kill the keep closest to your core in a particular lane. Once broken, keeps are destroyed for the rest of the game.

Instead of a single tower per point on a lane, there are two towers with a gate stretched between them to completely block the lane. 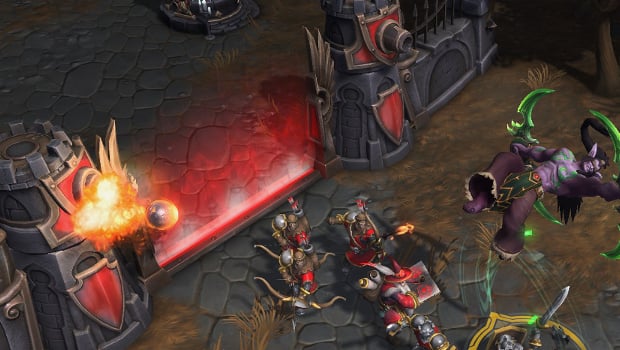 Gates can’t be passed by most enemies. Heroes can see your character if you’re attacking through the gate, and ranged characters can retaliate if you’re in their range. It’s therefore much more difficult to chase a fleeing hero for a kill, especially at lower levels. Forts are bigger, beefier towers, located just beyond each tower pair. Structures will never fire at a player until all enemy minions and mercenaries in range are gone, so you can AOE to your heart’s content (or just try to murder your opponents) and not have to worry that the tower will attack you. Unlike League‘s infinitely attacking towers, structures (except for the core) use ammo to attack. If a fort is under heavy assault eventually it may stop firing. Ammo restocks slowly over time when it’s not being used.

One of the biggest deviations from League of Legends is the importance of secondary objectives. In Heroes of the Storm, there are seven different maps, all in the mentioned Summoner’s Rift style (no ARAM or Dominion). Each map has a secondary objective that helps defeat your opponent. Most will require your team to deviate from their lanes, and are so desirable to complete they frequently force 5v5 engagements. Whether it’s unlocking a special siege unit, cursing your opponent to make their defenses temporarily useless, or powerful assaults on structures, secondary objectives are vital. In most situations, regardless of how far away you are from the fight or what you’re doing, it’s imperative that you go try to help your team complete the objective. 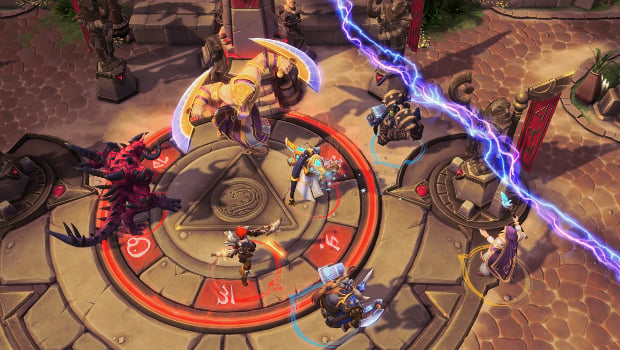 The secondary objective familiar to most League of Legends players, the Jungle, is gutted in Heroes of the Storm. There are only a few camps and they don’t grant much XP. Defeating them and then standing on a yellow circle to capture them will send strong mercenaries down a nearby lane. There are three different types of camps ranging in power, but none of them grant additional player bonuses like Baron Nashor. On some maps, it’s a good idea to send a few out just before the objectives begin to try to split your opponents’ focus; on others, it’s better to wait until the objectives complete to build to a larger lane push.

Learned skills like hero positioning on trades and–oddly enough–hiding in the bushes are still used to excel at the game. One skill central to League that isn’t present in Heroes is last hitting. Any XP earned is pooled between all the characters on your team. There’s no in-game item shop, so there’s no in-game currency to earn. Abilities similar to Stealth Wards are still valuable, but they’re mostly granted as talents to specific heroes. There is no trinket slot. No item shop means no mana or health potions while you’re in the weeds, either. You can backtrack a bit to fountains, which are located near your team’s forts. If you’re really in trouble, recalling to base will still slowly med you up to full, but the cast is still long, and easily interrupted.

Included in the removal of last hits, Assists and Kills are combined into a single Takedowns stat, so you don’t need to get upset if your teammates dogpile the opposing hero you were about to kill. The Deaths stat is the same as it ever was. At the end of a match, a Support class hero will have a similar number of Takedowns as an Assassin. 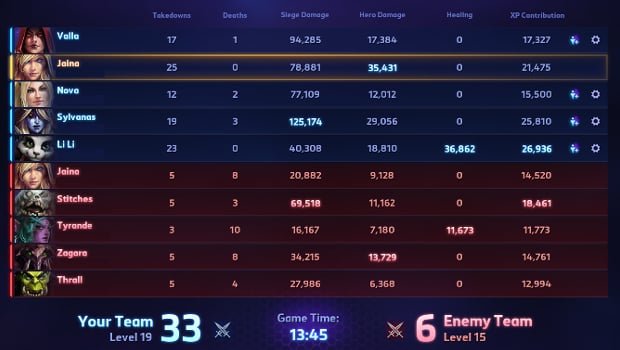 The hands-on bit of leveling up in a match works differently in Heroes of the Storm. Instead of picking additional ranks for your abilities as you level, every three levels you pick one of four unique talents until level sixteen. Level ten sees heroic abilities and level twenty adds a powerful match-ending Storm Talent. Your hero’s abilities will scale naturally as higher levels are reached. Talents can buff existing abilities or grant new ones. Leveling outside a match is similar to League. You level up both the player, and each hero as you play them.

Both games have a currency earned over time by playing (Influencer Points for League, Gold for Heroes), but only League has a cash equivalent currency. There are things for purchase in Heroes with real money, but prices are expressed in real-life currency instead of something like Blizzard Bucks. Like League‘s first game of the day IP boost, Heroes grants additional gold for completing a quest: play a number of games with a specific role, a character from a specific franchise, etc. A new quest is given daily, but you can save them for three days before you start missing new ones. Like League, gold is mostly reserved for purchasing new heroes. Real-life currency is used to purchase stimpacks (which are like boosts), skins, and mounts. Yes, mounts. You can use them to travel more quickly across the map with most characters, but mounting up requires a short channel after pressing the Z key. Attacking or being attacked dismounts you.

Outside the game, the only thing you can really interact with is the store. You can also chat with your Battle.net friends, but that’s about it. There are no secondary rune or mastery sheets to deal with, and no item sets to create. You can interact with the heroes in the game select screen to decide which talents you might favor, but you can’t select them until you’re in the heat of battle.

Lastly, the biggest reason a League of Legends player might want to try Heroes of the Storm: you will never, ever run into Teemo.

Blizzard Watch is made possible by people like you.
Please consider supporting our Patreon!
Filed Under: Getting Started With Heroes Of The Storm, Guide, Ham On The Core, Hero, League Of Legends, Moba
Advertisement