Today, Know Your Lore delves into the story behind Diablo with the tale of the Barbarians.

The Barbarians of Sanctuary are called this by those who do not understand them or their ancient culture, which was a casualty of the schemes of Baal and the actions of Tyrael. In destroying the Worldstone, they destroyed Mount Arreat and with it the very vigil that the Barbarians maintained for countless eons. Among themselves, the Barbarians know that they are the Children of Bul-Kathos, inheritors of his ancient legacy. Until the coming of Baal, they protected Mount Arreat from all who would despoil it, for they knew the truth — below Mount Arreat lay the Eye of Anu, the means by which Inarius created Sanctuary. Bul-Kathos charged them with this task in an ancient time, far before even the Sin War, for Bul-Kathos was one of the Ancients, the first generation of Nephalem created by the mating of Inarius’ angels and Lilith’s demons.

We know little of Bul-Kathos’ life. He is of the first generation of Nephalem, as were others such as Rathma and Esu, but it is unknown if he was a child of Lilith and Inarius as Rathma was (making Rathma his brother) or not. Like others of the Ancients, he was shocked and saddened to see the world change as Inarius used the power of the Worldstone to prevent Nephalem from attaining their true power, causing each new generation to grow weaker until the race of humanity came to be. During this period, he first took action to bring the tribes of what would become the Barbarians together, in part due to his desire to protect Arreat and the Worldstone from those who would seek to misuse it. At the time, Bul-Kathos had an ally named Fiacla-Géar, another of the Ancients who was either a brother or a close friend (close enough to be like a brother) and with whom he debated the proper path to take in the future.

Bul-Kathos argued that a strong people, well-skilled in the ways of war, would best safeguard the Worldstone, while Fiacla-Géar argued instead for a connection to the natural world and its power. Rather than continue the argument, the two saw the wisdom in each other’s approaches, and so agreed to enact them both. Fiacla-Géar took those members of the tribes that were of a mystic bent and left to found the druid order, teaching them how to harness the powers of the natural world. Bul-Kathos united the people today known as his Children and set them the task of guarding Arreat, while he set himself to permanently watch over the mountain. So dedicated to this task was the Immortal King that when Uldyssian ul-Diomed came to Mount Arreat during the Sin War, it was Bul-Kathos himself who faced off against this new Nephalem, and only the intercession of Rathma convinced the Immortal King to allow his passage.

Thus the Immortal King united the tribes and created the Barbarian people, charging them with the task of defending Arreat. This they did until the three Prime Evils unleashed their forces upon the world of Sanctuary. The archfiend Baal, Lord of Destruction brought his demonic hosts to Arreat, and although the Children of Bul-Kathos fought with all the ferocity and power of their birthright, they were not Nephalem, and ultimately they were defeated and their capital city of Sescheron was laid waste in a single day by Baal’s forces. Thanks to the betrayal of Nihlathak, the last surviving elder of the Barbarian fastness of Harrogath, Baal gained the Relic of the Ancients and with it the ability to pass unmolested by the spirits of the Ancients (such as Bul-Kathos himself) which in turn allowed him to reach and corrupt the Worldstone.

The Children of Bul-Kathos, after so many years, had failed their vigil. 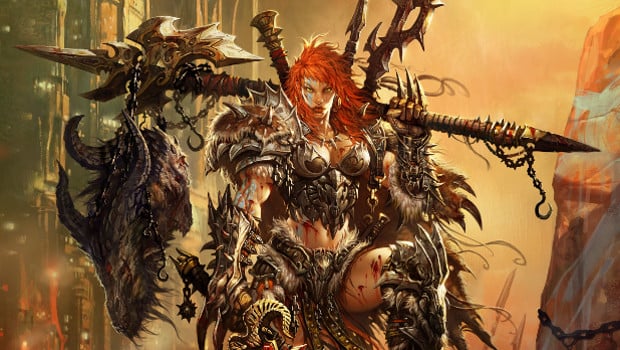 Tyrael arrived on the scene after another of the Children of Bul-Kathos had arrived to slay Baal, but too late — the Worldstone was corrupted, and if allowed to remain as it was, Baal’s destructive essence would warp all mankind. So Tyrael was forced to destroy the Worldstone, saving humanity — but leaving the Barbarian people utterly bereft. Their homeland now held a smoking crater where their holiest of holies once stood. Mount Arreat was replaced by a smoke and flame belching wound in the world. Sescheron was now a destroyed, monster infested blight upon the world. And the people who once knew that they were the blood of the Immortal King, from whose power they derived their purpose, saw that purpose destroyed. In one act Baal had destroyed their land and their very way of life.

Since that day, the Children of Bul-Kathos have dispersed from their former homeland, wandering Sanctuary as mercenaries and vagabonds, seeking to forget their failure. Those few that were born after the destruction of Arreat have never known a life other than this wandering — a hard people born and bred for war, they now know no other life, have no homeland left to them, and no purpose to fulfill. Those few of their people remaining in their homeland travel in packs, seeking to find a purpose for themselves by somehow defeating the evil that has rooted there.

Of course, the fallen star and its aftermath may have given them home, if the rumors are true and a Barbarian was the one who found it and discovered her true legacy as one of the nephalem, a true heir to Bul-Kathos himself. For now, the Barbarians are a formerly proud people who have given up everything to stand against the forces of Hell.