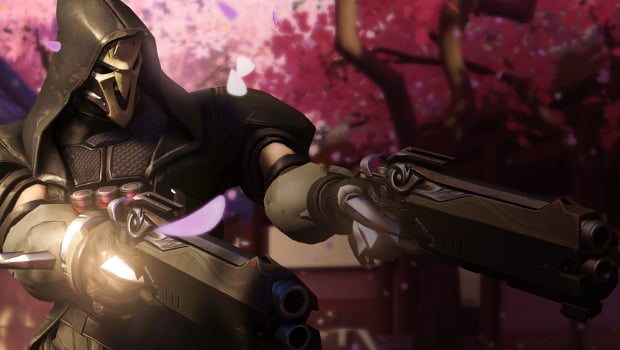 Reaper is the latest Overwatch character to receive a gameplay preview. Made available on YouTube earlier today, Reaper’s gameplay preview takes place on the Giza Plateau map. The first half of the video is more spectacular than the second, with Reaper building up a streak of 11 kills. His dual shotguns cut through his squisher opponents like butter, and you’ll notice the player is a habitual reloader — any time Reaper has a moment free of engagement, the player ensures they’re at full ammo in preparation of the next fight. Note Reaper’s health bar in the first half of that video: he’s constantly buffed and shielded, giving him significantly more survivability than he would have on his own. Reaper’s team includes Torbjorn, Zenyatta, and Symmetra as potential sources of additional health/shields/armor/heals. When his kill streak finally comes to an end, it’s because he became isolated from the rest of his team, surrounded by enemies.

In the Tracer and Symmetra gameplay videos, we watched a team on defense. In the Reaper video, we watch a team on offense — going out there and capturing objective points rather than preventing them from being captured. From this perspective, you can see Point A is far more vulnerable than Point B on these maps. An offensive team which can quickly capture Point A might stumble on Point B where the defense is given a far more advantageous position. Tracer and Symmetra were so dominant in their game that their opponents never passed Point A. If they couldn’t grab Point A, then Point B was a pipe dream. Reaper steamrolls through Point A, but it’s Point B where he ceases to be the butcher running the slaughterhouse — though he still did his fair share of slaughter.

Oh, and how about that rampaging gorilla just after the 5:00 mark? I had my doubts about Winston, but I suspect Reaper was regretting some life choices at that moment — until Winston wandered off for a walk in the park or whatever, anyway.

Blizzard Watch is made possible by people like you.
Please consider supporting our Patreon!
Filed Under: Overwatch-gameplay-preview-trailer, Overwatch-reaper, Reaper, Reaper-gameplay, Reaper-video
Advertisement