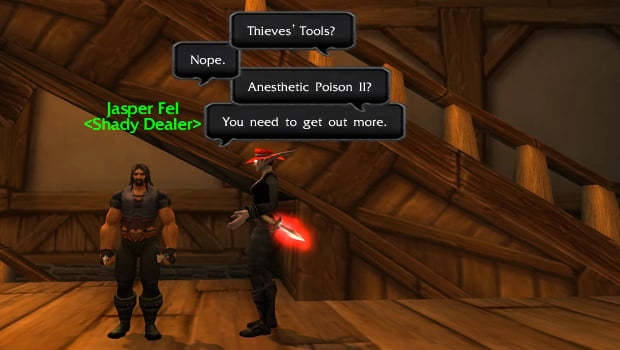 Once upon a time, we had to brew them ourselves, using recipes we learned from our class trainer and ingredients we bought from a vendor. We stacked them in our bags; each item coated one of our weapons for 30 minutes. Today, they’re spells in our spellbook; we learn them automatically. One or two clicks, and both of our weapons are good to go for an hour.

At one point, we had as many as six of them to choose from, and we could mix and match them however we wished. Now we select one of two from column A, and one of one from column B (unless we elect to add a second one as a talent).

Rogue poisons. What are they good for?

Obviously, poison design has changed a lot throughout WoW‘s history. The evolution of poisons over the years highlights a lot of trial and error on the part of WoW‘s game designers, and plenty of cases in which poisons had to be redesigned (or removed entirely) after players figured out ways to exploit them. You can learn more about the history of rogue poisons on WoWWiki, or in the detailed video below from hirumaredx (which summarizes changes up to the previous expansion, Mists of Pandaria).

Some might say the system has changed for the better; poisons are certainly far simpler to obtain and use than they’ve ever been, allowing players to spend their time on other areas of the game. Others can fairly argue that poisons have changed for the worse. Phrases like “dumbed down” and “no flavor” are uttered in darkened electronic alleys, and rogue players lament the almost complete lack of choice involved in poison selection.

Who’s right — and, more importantly, what role should poisons play in the future of the WoW rogue?

Heck if I know. But I’ll tell you what I think. Then you can tell me how wrong I am in the comments.

A Lack of Potency

From a quality-of-life standpoint, there’s a lot I’m happy about when I look at how poisons have changed. Let’s be honest, folks: Managing poisons prior to the Wrath of the Lich King expansion — heck, even prior to Mists — was a royal shiv in the keister. It was like having an additional profession, only more boring: We bought reagents, we brewed them into poisons, we stored each poison in our bags, and we applied those poisons separately to each weapon.

None of this was my idea of fun. Most of the poison-management process was a grind: complexity without much depth. I didn’t feel more like a rogue because I had to spend a notable chunk of my playtime riding (remember, the greatest level of poison complexity in WoW‘s history took place during a period when we couldn’t fly in Azeroth) to and from an extra vendor, and then crafting additional items, just so I could perform up to my class’s basic potential.

I don’t sigh whenever I look at Jasper Fel’s wares and see no Essence of Pain in his item list. (Or much of anything else, for that matter.) To me, the game hasn’t become any dumber because I can now apply a poison to both of my weapons with a click of my mouse. It’s just less tedious. That’s a good thing. 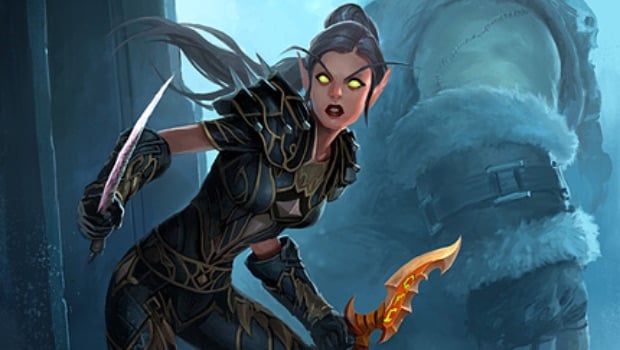 What isn’t a good thing, to me, is the extent to which using my poisons generates no emotion within me. It’s something I do mechanically, without thought, like I’m a Dunkin’ Donuts kitchen worker who only ever makes egg-and-cheese Wake-Up Wraps. Whether I’m raiding or questing, I click Deadly Poison (I usually don’t even bother with Leeching; I prefer Cheat Death‘s get-out-of-doom-free card), I glance at the timer periodically, and when it’s about to expire, I click Deadly Poison again. There’s no thought, no deliberation, not even a guide to consult; I just click a button every hour or so, a minor hassle that never feels good but can easily feel very bad (if I fail to notice that my lethal poison has expired before or during a fight).

In PVP, the situation appears little better: According to World of Wargraphs, arena players with a rating of 1800 or higher overwhelmingly choose Elusiveness in the Level 45 talent tier — which means the vast, vast majority are not opting into Leeching Poison. That leaves them with only Crippling Poison as their non-lethal “option.”

Lethal poison selection in PVP can potentially be a smidge more interesting depending on whether the rogue’s primary goal is direct damage pressure (go with Deadly Poison, which is magically transformed into Instant Poison if you’re in combat spec) or reduced healing (opt for Wound Poison), but outside of highly competitive scenarios that distinction becomes more academic than practical.

But more fundamentally, the lack of a third (or fourth, or fifth) potentially useful option can often make any decision between poisons feel unfulfilling. We don’t have Mind-Numbing or Paralytic as additional choices anymore. It can start to feel like we’re forced to choose whether to play an 1980s-era arcade claw machine filled with ratty stuffed animals or the one next to it filled with scratched-up Matchbox cars. 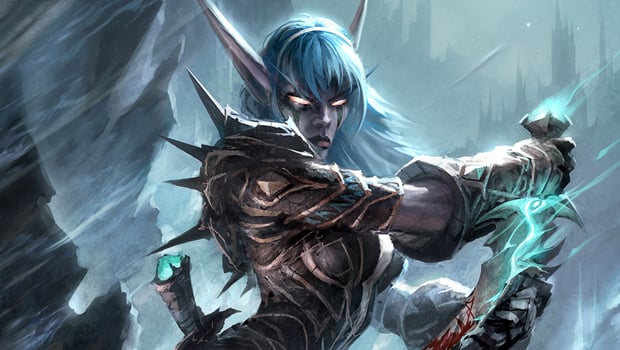 Are Poisons Worth Saving?

Periodically, someone will start a thread in a forum, and players will share ideas for new poisons they feel would be fun to add to the game. Maybe one that causes the enemy to pulse AoE damage onto its nearby allies. Or that makes the enemy briefly unable to target the rogue. Or that simply causes aesthetic changes for poops and giggles, like turning the enemy’s armor pink or immediately attracting a swarm of angry bees.

I’ll be honest: I don’t know whether such changes are a wise use of designer time and resources. I think creative ideas for new poisons come from a well-meaning desire on the part of many players to recapture a sense that playing their rogue feels more distinct from other melee DPS classes than it currently does, particularly in raids. But I wonder if that same sort of goal can be achieved through improvements that don’t run as much of a risk of being exploited or creating class-balance headaches, such as more widespread value to (and interesting rewards from) pickpocketing or lockpicking, or a return of engaging, class-specific quest chains throughout the leveling experience and beyond (a change I think the entire game could benefit from).

What I do feel, though, is that the current state of rogue poison design is uninteresting at best. I’m a little amazed I’m even saying this, because I’ve long considered poisons to be the second most-defining characteristic of the rogue class (after our stealth and its related tools), but if compelling complexity in poison choice can’t be brought back to the class, I wouldn’t mind seeing poisons eliminated entirely as spells, their effects instead baked into other abilities.

No more illusion of choice, nothing left to click every hour. Perhaps one or more of our specs could still retain a sense, from a lore perspective, that poisons are involved — for instance, assassination rogues could automatically apply a poison effect with each melee hit, and could have a visual effect unique to the spec (e.g., a poison vial hitched to their belt).

That’s just my take, though. How about you? Do you miss the intricate poison-construction process of yore? What would you do to make poison use more interesting? How sad would you be if poison spells went away entirely in the next expansion? Coat your keyboards with truth venom and type what’s on your mind.

Blizzard Watch is made possible by people like you.
Please consider supporting our Patreon!
Filed Under: Encrypted Text, Poisons, Rogue, World Of Warcraft, WoW
Advertisement