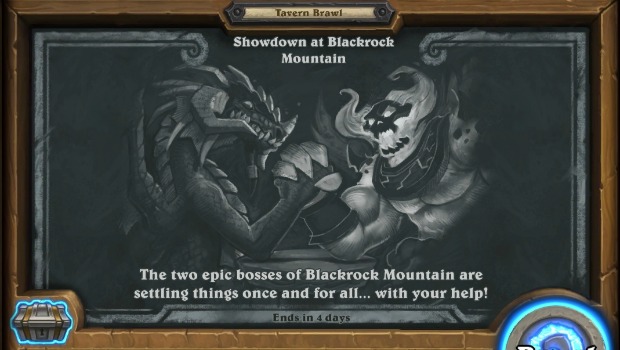 The new Hearthstone feature Tavern Brawl went live yesterday for the first of its weekly runs. The special rule set for this week is Blackrock Mountain-themed. You are pitted against another player and randomly assigned to play either Ragnaros or Nefarian from the recent Adventure Pack. Sounds fun right?

Well, the problem seems to be that the decks aren’t very balanced. An informal Reddit poll shows Nefarian winning 75% of his games and Ragnaros only 25%. Nefarian starts with more mana, low cost/high damage minions he can play on turn one if they are in his starting hand and the synergy that comes with having a dragon deck. Add to that the random class cards that cost no mana to cast that he can pull every turn through his Hero Power and you’ve got a powerhouse of a deck. Ragnaros has…a 2/6 weapon. This is a big issue since you need a win within the week to get your free pack of cards.

It’s not impossible to win as Ragnaros, it’s just not easy. If Nefarian doesn’t drop a combo of cards that takes you out in the initial rounds, you have a chance. Play your taunts early, use Living Bomb and Lucifron wisely, drop those Core Hound Puppies on the board quick and burn through that weapon so your Hero Power flips to doing 8 points of random damage. If you can control the board early on, you’ll have the time to drop your Molten Giant, or better yet, Golemagg.

That being said, I’ve haven’t won yet as Ragnaros or lost yet as Nefarian. What has your experience been like?

Blizzard Watch is made possible by people like you.
Please consider supporting our Patreon!
Filed Under: Blackrock-mountain, Nefarian, Ragnaros, Ragnaros-deck-tips, Tavern Brawl
Advertisement