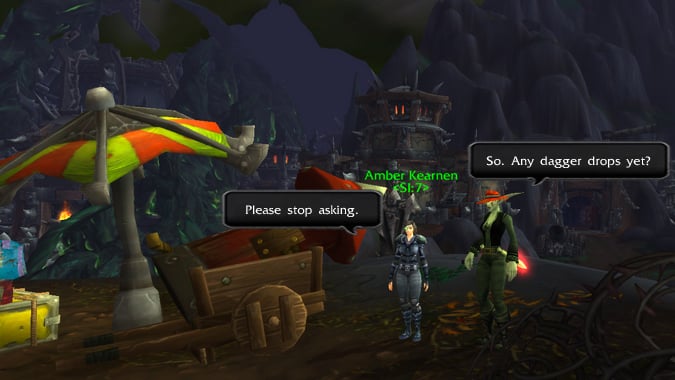 You can feel it in the air, like a scent on the breeze. Patch 6.2 has arrived, and with it we rogues have been bequeathed a new, fresh, verdant land, flush with unpicked pockets and unstabbed foes. Let us despoil it together, shall we?

But first: some good old-fashioned Queue-style Q & A.

I took to Twitter, the official WoW forums, and Ravenholdt over the past week to ask you what rogue-related questions were on your mind as the final days ticked off the clock to patch 6.2. You responded! Here are my answers to several of your queries.

A whole bunch of you asked questions that, although each person’s words were different, all had the same basic query at their core: What Rogue spec is going to be best for raiding in patch 6.2?

Let me explain. No, there is too much. Let me sum up: 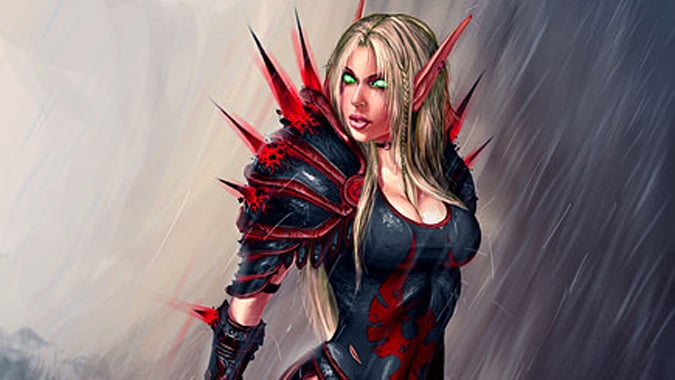 Desteria (via Aeriwen) wrote:
Assuming I don’t have the new set bonus for dispatch, should I use Dispatch without a Blindside proc in 6.2 since Mutilate does so much more damage now?

Yes, if you’re playing in Assassination spec, it looks like you’ll still want to use Dispatch when your target has low health. But it’s a pretty close call.

It feels almost as though WoW‘s class designers approached Assassination spec balance this patch like a physics problem: There was an action, and then there was an opposite reaction. They handed us massive buffs to the spec’s core damaging abilities, Mutilate and Envenom. But they didn’t touch Dispatch, which by design is meant to replace Mutilate as our combo point builder when our target is below 35% health. As a result, theorycrafting currently suggests that Mutilate is very nearly as good as Dispatch when we’re still decked out in our pre-patch 6.2 gear.

Seemingly aware of this, the designers reacted by making Assassination’s new raid tier set bonuses all about boosting the strength of Dispatch. As soon as you get the Tier 18 two-piece bonus, Dispatch’s lead on Mutilate grows dramatically, which is where it arguably should have been the whole time. Then, when you get the four-piece bonus, the power of Dispatch launches into the stratosphere — which, incidentally, is also part of the reason that Assassination appears to potentially pass Subtlety in DPS potential at higher gear levels in patch 6.2.

For more on this and other theorycrafting-related issues pertaining to rogue raiding in patch 6.2, I highly recommend Fierydemise’s FAQ.

@Coggling tweeted:
any suggestions for someone who took a long break after hitting 100 and just came back? (Rogue main of course :-) ) mostly heroics, LFR, helping my guild in raids, and maybe a bit of PvP. So…a little of everything :-)

This is horribly biased and selfish advice, because I’ve written or edited a hefty portion of the major PVE Rogue guides that exist for this expansion — and I consider some of the other folks who’ve written guides to be trusted friends. But if you’re looking for rogue-specific guidance on how to raid, the Ravenholdt fansite is worth a visit. (Full disclosure: I’m one of Ravenholdt’s founders.)

Quality PVP resources for Rogue players aren’t as well consolidated; the U.S. rogue class forum has some decent stickied guides, but my own reference of choice at the moment is SusejFTW’s YouTube channel.

For more general, in-depth explanations of how the game has changed in Warlords of Draenor (including the Rogue class itself), you pretty much can’t beat Wowhead. (Sheepish disclosure there as well: I wrote Wowhead’s Rogue raiding guides, which rely heavily on info at Ravenholdt.) And, of course, for patch 6.2 info in particular, stay here at Blizzard Watch! 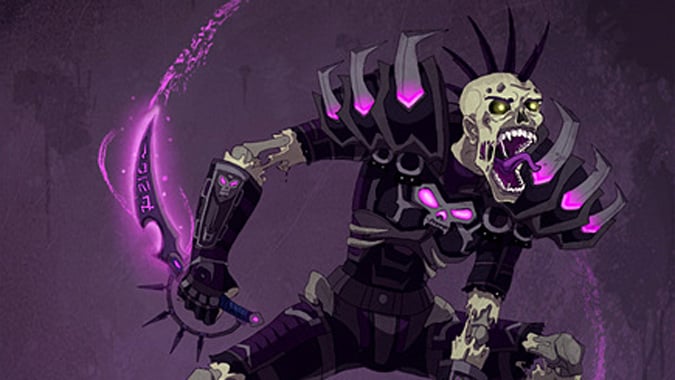 Delusion wrote:
Not really 6.2 related but I think about it whenever a raid patch is released and I am sent out to forage for two separate weapon sets. Say maybe they allowed any weapon for any spec. Combat daggers, mace assassination, etc and they all did equal damage. Do you think it would it hurt the class to have a choice of weapons from a flavor standpoint? Would it hurt dagger representation or would the inclusion of a viable combat daggers even it out?

“Forage” is a nice word for it. I’ve spent extensive periods of time in each of the past two expansions raiding exclusively in Combat spec because non-dagger weapons were the only ones that happened to drop from raid bosses for me.

I don’t have a strong opinion on whether each of our three specs should be allowed to wield any one-handed agility weapon (axe, dagger, fist weapon, mace or sword). On the one hand, it would certainly remove an awful lot of pain and frustration for those not awash in weapon drops; on the other, I do think it would chip away at what little feeling of true aesthetic difference exists between Assassination, Combat and Subtlety.

One idea that intrigued me, which I think I recall seeing a player propose once, is the possibility of having one-handed weapons drop from bosses as tokens. I’m imagining a virtual world in which every (or nearly every) raid boss had a percentage chance to drop a generic token that, when a player clicked on it, would turn into a spec-appropriate one-handed agility weapon. If, for example, you killed that boss with Assassination set as your loot spec, the token would automagically become a dagger.

I may be oversimplifying the benefits of this design approach while blinding myself to its potential pitfalls. But I also know how restricted I feel when I realize that only three raid bosses in an entire tier will drop the type of weapon I need for a given spec — and that if I don’t get two of those drops (one for each hand), I’m arguably better off playing a different spec that I have better weapons for, even if it’s a weaker spec on that fight or I simply don’t enjoy playing it.

Yes, sure, it feels good to finally get that key weapon drop after days, weeks or even months of unlucky loot rolls. That’s the whole point of the gear-drop system working the relatively random way it works: It feels even better to get that drop when you’ve been burned a few times. But I don’t like feeling that I’m “playing for a boss” — i.e., that I’m waiting for one specific raid boss to give me one specific item so I can play my class the way I’d like to, or the way I feel I owe it to my raid group to be able to. I want there to be an approach to weapon drops that feels better than that, while still retaining the challenge and the pleasure of winning a hard-earned upgrade. 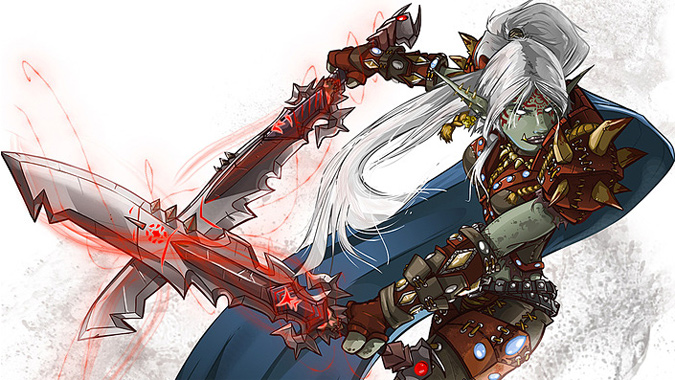 Taco wrote:
Do you reckon the rogue could use an overhaul?

Nah. Overhauls are dangerous and terrifying things, and can potentially cause a gaggle of new problems that are worse than the old ones seemed to be. Consider how expansions often seem to bring with them at least one new Rogue ability that, at least for a time, proves to be error-prone and difficult to balance. Here in Warlords of Draenor, the best example is probably Death From Above, one of our new level 100 talent options, which spent most of the first six months of the expansion in a largely unusable state.

Now imagine that situation, but on the scale of an entire class and spec system being turned upside down: a whole mess of new or fundamentally changed abilities, glyphs, and talents, along with a (probable) rewrite of our resource system. And that doesn’t even touch on the potential for graphical bugs, user interface problems, or a host of other potential issues that arise when you start a class over from scratch. Plus I know a few theorycrafters who would frantically dig a hole to the center of the earth with their bare hands if they were told they’d need to recalculate how our class works from the ground up.

But all of that is beside the point. Personally, I like the way our resource system works, and I think that many of the fundamental aspects of how the Rogue class functions are solid concepts that deserve to stick around. I think the changes we need to see are a mix of deep dives into specific mechanics — I wonder, for instance, how stealth would actually be programmed into the game if it were added now — and more superficial adjustments that can make playing a rogue feel more fun and unique than it tends to feel today.

Dinner wrote:
Why is the positional requirement still required for backstab.

Blizzard Watch is made possible by people like you.
Please consider supporting our Patreon!
Filed Under: Encrypted Text, Patch-6.2, Rogue, Warlords Of Draenor, WoW
Advertisement