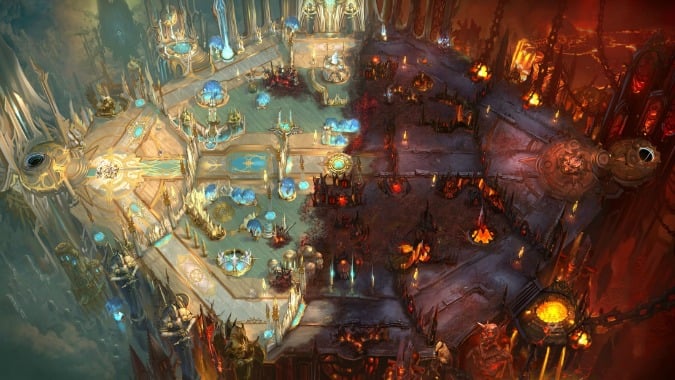 I spent the last week on the Heroes of the Storm PTR playing round after round on the new Battlefield of Eternity map. Part of the Diablo-themed Eternal Conflict content push for Heroes, the 2-lane half-Heaven, half-Hell map throws in a new mechanic, tweaks some old ones and throws in some forced team fights for good measure. And this makes it one of the fastest maps to play in the game because if you don’t work the main mechanic hard, it will all be over very quickly.

First let me say that the map is gorgeous to look at. All of the graphics are custom built for the theme from the turrets to the minions to the mercs. The Heaven side is a white and gold theme with glowing blue accents, while the Hell side is all blacks, reds, and burning fires. Add to that the iconic Diablo stringed instrumental music, and Deckard Cain’s voice, and you have no doubt you are playing in the world of Sanctuary. But you have no time to marvel at the artistry of the design, because this map is more brutal than any other in the game. 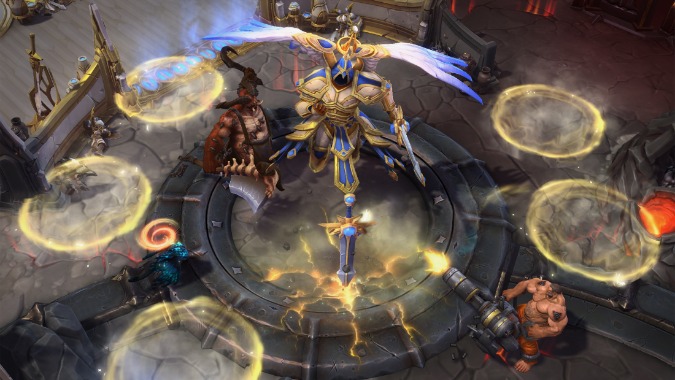 In the middle of the map are an angel and a demon that spawn a couple of minutes into the match. Your team must try to kill the opposing side’s Immortal while protecting your own. When you get the opponent’s Immortal down to half health, both Immortals clash briefly and take different positions in the center of the map for you to continue your attack. And this is one of the two critical points in the game. While they clash, both teams rush to the middle of the area and try to kill each other in a very tight space. Area of effect abilities, especially ultimates, are particularly brutal here. Even taking down one or two of your opponents at this point can mean defeating their Immortal  first and utilizing yours as a powerful lane golem at your disposal, which leads to critical moment number two.

When your Immortal starts pushing down a lane, you can make it almost all the way to the core the first time if you get your entire team behind it. If the other team does not push back very, very hard, the game will be over very quickly for them. And we all know there is always some guy who decides it would be a great idea to farm a merc at the other side of the map when you need all hands on deck for a team fight. 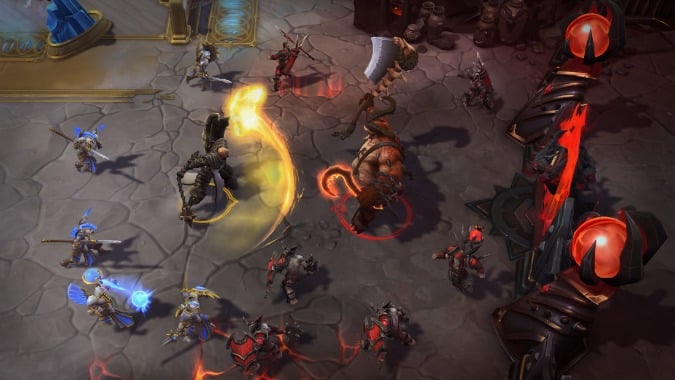 Almost every one of my matches on this map ended within 10 minutes. Whichever team came out ahead in the team fight in the middle of the Immortal  swap, was able to push so far down the lane with their Immortal that comebacks were very unlikely. Can comebacks happen? Yes, but everything has to fall into place for the losing team in a way that didn’t during the team fight. They would have to work the merc camps, fend off coordinated rushes on their core AND win the next Immortal fight to have a chance.

Is this a bad thing? Maybe not. We’ve all been stuck in a match that you knew from the beginning you weren’t going to win because of your team comp, but you had to sit through for 20+ minutes for the inevitable defeat to arrive. On this map, it will likely be over one way or another in less than 10-15 minutes and you can move on to the next match. Also, since coordination is key here more than any other map, it may encourage players to communicate better with pings. Right? Well, a guy can dream, can’t he?

The new Battlefield of Eternity map is going live in the Tuesday, June 30th patch along with the new Assassin hero The Butcher.

Blizzard Watch is made possible by people like you.
Please consider supporting our Patreon!
Filed Under: Battlefield-of-eternity, Eternal-conflict, Heroes-of-the-storm-map
Advertisement