The Queue: Give it up for the foliage 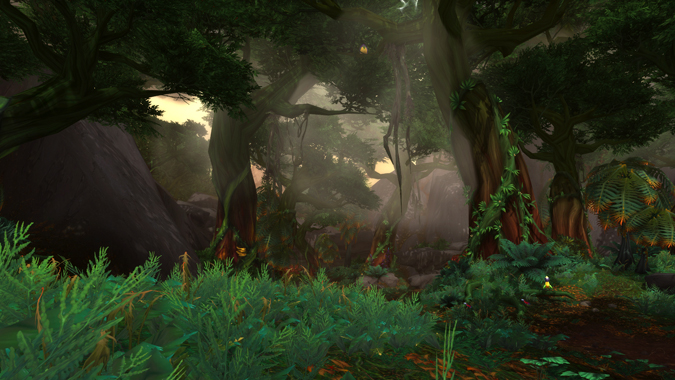 Can we just take a minute to appreciate this lush tropical jungle, the myriad different types of grasses, the way the sunlight filters through the trees, and all those little shadows spattered all over the scenery? I don’t know who did the environment work this expansion, but every single last one of those people deserves a round of applause and some cookies.

Q4tQ: Where do you think that raptor from Azshara (Subject Nine) went off to? Do you think we’ll see her again – maybe on Argus or some other planet in the future? I hope so <3

I like to imagine she found a world of primal barbarian badasses and lots of jungle and mysterious ruins to happily settle on. In my imagination, this is also the world that Alleria and Turalyon ended up on. It’s very Frazetta/Conan meets Thundarr the Barbarian. It’s an amazing world with dinosaurs that make Oondasta look like a wee little baby. And Old God secrets. And Titan relics that explain the bizarro conflict between Sargeras and the Pantheon. And every flies on pterodactyls.

I may have given this more than a little thought over the years.

Q4tQ: WHY in the name of all that is holy is there a submarine at the Shipyard whose default name is Neltharion’s Madness?

Fun story — way back when, goblins were responsible for Deathwing’s armor. They built the plates that encased his gooey molten center and kept him from falling completely apart. Maybe the goblin that came up with that particular  submarine is one you should be keeping an eye on, if you know what I mean. (Okay, kidding — but hey, Neltharion’s madness nearly tore a world apart, so that’s suitably terrifying, you know?)

QftQ: What flying mount do you guys think “matches” Trolls the best, from a lore perspective?

Good question! It depends on what kind of troll you’re playing. Each troll tribe has their own branch of loa that they worship, usually represented by animal spirits. So for a Darkspear troll, a bat would really be the best flying mount, because they tend to lean towards the old Gurubashi loa — the same applies for a Gurubashi troll. For a ground mount, tigers are ideal. A Darkspear wouldn’t be caught dead on any kind of bird mount at all.

For an Amani troll, a dragonhawk would be the most suitable flying mount, while bears make the best ground mounts. For a Drakkari, they don’t really have any wind serpent mounts available, but I’m guessing the cloud serpents of Pandaria would be a good substitution — and ground mounts would include mammoths and rhinos.

What are your thoughts on the investor speculation of WoW 7.0 releasing in June ’16 to tie in with the movie?

I think that’s a really far stretch to make, considering movie development and distribution is in the hands of the distributor of the film, and not in the hands of game developers. Look at the most recent re-scheduling of the Warcraft movie, it was pushed from a spring to a summer release. That wasn’t Blizzard’s call, that was the call of the movie studio. Trying to plan, design, and polish a video game in synch with something like a movie wouldn’t really work unless that game was largely done and in the can well before the earliest reported release date for the film.

And I really, really don’t see Blizzard waiting that long, at least not without giving us some other major piece of content between now and then. They saw what happened and how unhappy people were when they gave us over a year with no content at the end of Mists of Pandaria, and I’m pretty sure they’d like to avoid that happening again.

What are the odds of Blizzard adding a new place in Old Outland that we’d use as a base to attack demons in the Twisting Nether?

Edit for clarification: Do you think the devs would be accepting the idea of GOING BACK to a very finished and lower level product (old Outland) and add new, top level content to it?

I doubt that we’d ever go back to an old world like that to do something new as an actual expansion. Could I see them adding some kind of new base to an old expansion’s content? Yes, if it were phased in appropriately so that leveling players didn’t bump into it. I think it’s a fun idea though, and a neat way to kind of re-visit those old areas.

It seems increasingly like Blizzard sees movie Warcraft as an AU like Draenor; do you think we’ll see that reflected in-game?

I honestly don’t think we’ll see any of the movie events in game as canon material. I think the Warcraft movie and the story that takes place in it is self-contained. It’s not going to be an exact re-telling of what happened in Warcraft: Orcs and Humans — that game and that story is 20 years old. I think we’re going to get a refreshed and revised version of that story, one that works on film.