One of the brand new features mentioned in today’s reveal was Class Halls. These will be similar to garrisons and reminiscent of guild halls that the community has been clamoring for. They are heavily tied to class identity and will be unique to each class, offering a place to retreat to and customize artifacts as well as access special quests and missions.

The difference from the garrisons that we currently inhabit is that the class halls are not entirely private, and they will be available to members of your class. Instead of a private little space, devoid of activity except for scripted NPCs (no matter how intelligent they may act), these halls will be bustling with actual players from your own class, providing a sense of camaraderie. 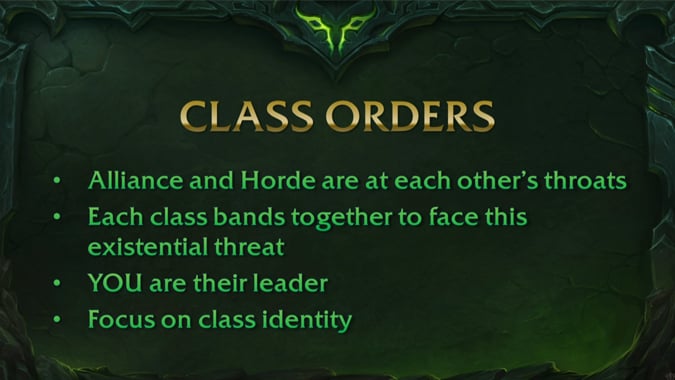 In the new expansion, in the face of this old threat that Azeroth has dealt with before, classes will fall to their own orders to save the world. You were the commander from Draenor — and now wielding a very famous weapon — so your order will look to you for leadership.  After gathering your artifact, you will build the hall for your class in a location that fits its theme. Examples included in today’s presentation were the Maelstrom for Shamans, a Legion portal world for Warlocks, Light’s Hope Chapel for Paladins, Dalaran for Mages, and Acherus for Death Knights.

We’ve seen complaints of homogenized classes in past expansions, and this will bring classes back to their roots to make you feel unique. Also heavily requested in years past was a return to class-specific quests, like the Warlock/Paladin mount quests, Druid flight form, or the more recent Warlock green fire quest. The quests and missions in these halls will likely give players a return to those epic moments from the past. 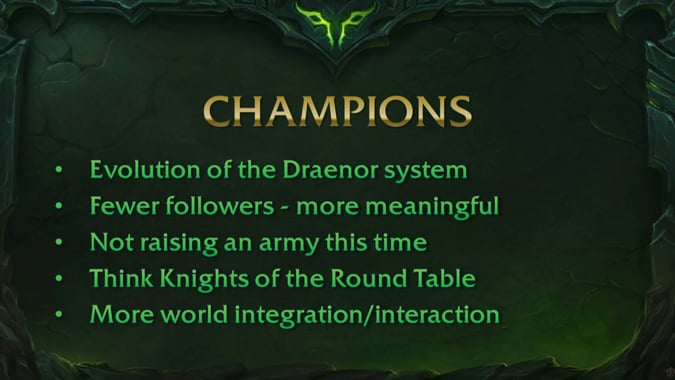 Another similarity to our current garrisons has to do with the followers. Rather than acquiring followers to mindlessly send on missions without really caring about anything except their traits, we will instead have select champions of our class. This makes me excited because I’ve been collecting followers specific to my characters’ classes for quite a while in an attempt to add flair to my garrisons.

These followers add to the story presented. Our current story in Draenor was about raising an army to defeat the peons of the Iron Horde. The Burning Legion is different, and endless, so we have to change our strategy. Paladins have champions of the light, such as Lady Liadrin. Warlocks, who care less about individuals, could have minions, and Mages, who work with their own, may have adepts or apprentices. These will be customizable and more interactive — enabling your own play rather than replacing it, like the current iteration of followers can do. Instead of sending them to do your dirty work, they work alongside you and assist your own questing.

It’s an early look still, and there are a lot of details to be hammered out, but class halls look to be very exciting and full of potential.